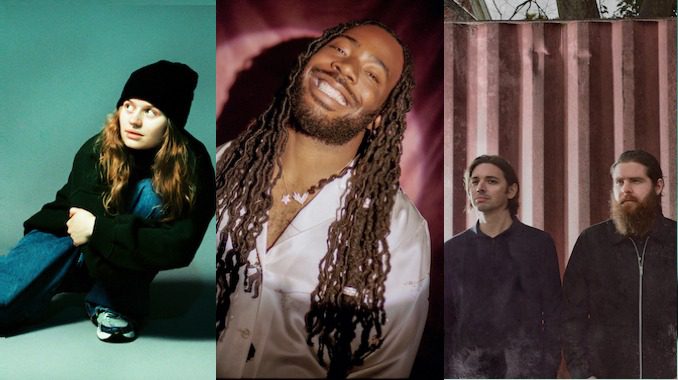 As we wrap up the last week of April in this already fast-moving year, the month goes out with an absolute bang, featuring some of its most exciting music yet. Whether you want to chill out with Leon Vynehall or pack a spring picnic to the tunes of Rosie Tucker, there is a wide variety of albums to accompany you into an optimistic May as the world shows signs of normalcy. Find a new favorite below.

Psychedelic indie outfit Crumb have outdone themselves again, dialing heavily into the serene and atmospheric corners of their creativity for a deeply complex album with even more difficult questions behind it. Frontwoman Lila Ramani describes the record as an examination of “real substances and beings that live on this planet.” The album was recorded with Foxygen’s Jonathan Rado in Los Angeles to create a surrealist atmosphere that takes cues from genres such as disco and dream-pop. It’s a thrilling expansion to Crumb’s endless void of creativity. —Jade Gomez

For someone so committed to flexing her New Orleans roots, Dawn Richard often makes music that sounds like it’s coming from an entirely different planet. On previous albums, the former Danity Kane and Dirty Money member often sang about love and life in the language of sci-fi and fantasy atop equally celestial beats. Her music likewise sounds interstellar throughout most of her sixth and newest album, Second Line: An Electro Revival, but here, she sets an explicit goal of shouting out her homeland more than ever before. All her ambition, love, and confidence stand in for her geography—Second Line is less about putting New Orleans on the map than Richard herself. —Max Freedman

girl in red: if i could make it go quiet

With her undeniable talent and the immediacy of her lyrics, girl in red obviously has already garnered mainstream recognition. Despite her early success, she takes risks that show she’s not one for complacency. Her debut album, if i could make it go quiet, delivers on both authenticity and earworms. Ulven is radically vulnerable, discussing “things I haven’t been comfortable talking about, or admitting to myself, or even things to tell my closest friends and family,” as she says in a press release, and that will surely resonate with listeners. —Clare Martin

Gojira have slowly strayed from their death-metal roots, but on their latest effort Fortitude, the French metal pioneers embrace a more mainstream approach to their enchanting songwriting. There is no shortage of chugging guitars and frontman Joe Duplantier’s war cries, but the way that the band continues to innovate with their slow-rising melodies and silky echoes is exciting and mesmerizing. The subtle nods to blues-rock, as well as Indigenous and African drumming, make Fortitude a necessary protest album. —Jade Gomez

Leon Vynehall’s dance music on Rare, Forever is an absolute trip. The DJ’s latest creation is a perfect thematic follow-up to the euphoria of Rojus (Designed to Dance) and his prickling, cinematic creation Nothing Is Still. The eerie, otherworldly textures on Vynehall’s new album seem to contain some unknown alien ingredient that makes listening incredibly captivating. Each track brings something different to the table, whether it’s the hair-raising synths of opener “Ecce! Ego!,” the chilled-out and jazzy “Alichea Vella Amor” or the euphoric haze of “An Exhale.” Vynehall is introducing an extremely limited scope of a black label test pressing of the album—only 50 copies will be sold—which feels very on-brand for a work as individual and lightning-in-a-bottle as Rare, Forever. —Carli Scolforo

On their long-awaited follow-up to 2005’s Superwolf, Matt Sweeney and Bonnie ‘Prince’ Billy don’t fix what ain’t broke—then, as now, “Bonny wrote the words, Sweeney wrote music—a Superwolf lies born.” The folk guitar and vocal tangles that make up Superwolves evoke the spontaneity and seamless interconnection of a jam band in top form, as if Sweeney and Billy (born Will Oldham) are spinning their stories on the spot, feeding each other inspiration. To hear Oldham tell it on album opener “Make Worry for Me,” their lyrics and instrumentals come from the same place, two ways of scratching the same internal itch to create something larger than life: “I affiliate with beats and notes / Mysterious figures in long feather coats,” Oldham sings, later declaring, “I got monsters inside me that must be born.” Superwolves roams free, fearsome in its imaginative force and displays of technical skill, with the Tuareg guitars of Mdou Moctar and his band as an added X factor. —Scott Russell

Rochelle Jordan: Play With The Changes

Rochelle Jordan has added to the growing amount of dance albums of 2021 that yearn for the intimacy of the dance floor. U.K. house influences combined with the soulful vocals that dominated ‘90s dance music make Play With The Changes sound like a fresh take on a beloved, nearly inimitable time and genre. Jordan’s whispery crooning skips delicately and sensually over percussive clangs and 808s as she brings in a modern cool-girl R&B flair for fans old and new to enjoy. The introspective rumination on Black womanhood grounds much of the album, as she channels pain and empowerment in new, innovative ways while paying tribute to the music that made her. —Jade Gomez

Sticky hooks abound on Sucker Supreme, the Epitaph Records debut from Los Angeles-based rock singer/songwriter Rosie Tucker and their band. But once Tucker’s bright alto and insistent melodies reel you in, you’ll find an album that, just like Tucker, refuses to conform to reductive binaries, pushing tirelessly for nuance, honesty and inclusivity. “You can hold my head to the light / I can tell you all of my names / You can print whatever you find / You can call me anything,” Tucker sings on “Different Animals,” as if liberated by the multitudes they contain, opening their heart to let them all flow out. The songwriter’s current touring band—drummer Jessy Reed, guitarist Jess Kallen, and bassist and Sucker Supreme producer Wolfy—join the recording mix for the first time on the album, their performances adding further dimension to Tucker’s vision: splashing vivid pop-punk colors on a singer/songwriter’s expansive emotional canvas. —Scott Russell

Shelley, formerly known as DRAM (apologies if you’ve had to read that phrase far too many times just now), has done a complete overhaul. On his last album, 2016’s Big Baby DRAM, the musician explored happy-go-lucky rap injected with his buttery vocals and lyrics that work as late-night texts and Instagram captions. He became a sensation for his hit singles “Cash Machine” and “Broccoli,” but a deeper listen on the album reveals a superbly talented musician wanting to test the waters of full-fledged R&B. He has finally been able to do that, complete with shedding the stage name and returning to his birth name, Shelley. The Virginia-based artist crafts a deliberate R&B album, oozing with his delicate, yet raunchy, panty-dropping lyrics tinted with his boyish charm and vulnerability. There are not enough adjectives to describe this album, but It can be best summed up as indulgent. —Jade Gomez