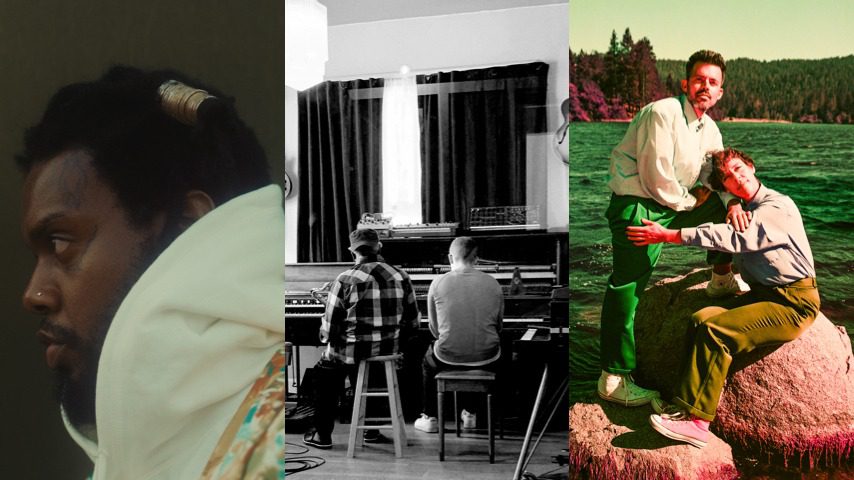 March 2021’s final New Music Friday has arrived, and with it a big stack of albums worth wrapping your eardrums around. Superlative new efforts from serpentwithfeet and Floating Points & Pharoah Sanders lead a slate that also features art-pop veterans Tune-Yards, fresh rock faces Floatie, and much more to be excited about. You’re going to want to spend all day with these albums, so we’ll nudge you along to ‘em without any further ado.

The Antlers: Green to Gold

The first new album from Peter Silberman’s indie project The Antlers in the better part of a decade, Green to Gold is a pastoral, folk-infused record titled for the transition from summer to winter. Past Antlers releases, including 2009’s Hospice and 2014’s Familiars, have skewed towards the stark, but Green to Gold stands apart: “I think this is the first album I’ve made that has no eeriness in it,” Silberman has said. “I set out to make Sunday morning music.” From the opening notes of “Strawflower,” bright guitar plucks backed by the buzz of cicadas, it’s evident Silberman did exactly what he meant to. Green to Gold is lush and rustic, with a hushed loveliness ideal for the early morning hours in which it was recorded. —Scott Russell

Burlington, Vermont’s Clever Girls, the indie-rock songwriting project of Diane Jean, waited a long while to release their second album Constellations. They started writing the record in early 2018, before they’d even finished recording their debut, Luck, and after Jean had come out as queer and gender-nonconforming. These songs find the songwriter working towards personal autonomy and acceptance, and surround their unflinching emotional journey with versatile, always-compelling guitars and dynamic arrangements that keep the listener off balance, unsure of what’s around the corner of the next measure. Constellations is music for those who look inside themselves and are unsure of what it is they see, but refuse to turn away. —Scott Russell

Esther Rose: How Many Times

Esther Rose announced her new album How Many Times back in January. It’s her third full-length, and it follows her 2019 album You Made It This Far. The announcement also came with a Sarrah Danziger-directed music video for the title track. “How Many Times” mixes Rose’s tried-and-true country roots with a doo-wop-esque sway and some sha-la-la’s for good measure. Add fiddle, lap steel and acoustic guitar to Rose’s winsome, compassionate vocals and timeless tale of heartbreak that needs to be numbed, and what’s not to love? “It’s not really just about feeling better, it’s about feeling it, whatever it is,” Rose says of her forthcoming album. Paste praised You Made It This Far for “seamlessly mixing musical nostalgia with the pressures of being a young-ish adult in 2019.” —Lizzie Manno

Chicago quartet Floatie make brain-wrinkling rock that wouldn’t be possible without their close interconnection. Though Sam Bern, Luc Schutz, Joe Olson and Will Wisniewski have only just released their debut album on Exploding in Sound, Voyage Out is the product of a creative relationship that dates back nearly a decade, lending the band’s introductory effort a hard-won unity of vision you rarely see on a debut album, with Floatie writing and performing as one. There’s math-rock precision aplenty here—like on the arpeggiated riffage of “In the Night,” the elusive time signatures of “Lookfar,” or the title track’s dueling guitars—but where that kind of calculated instrumentation can sometimes feel sterile and joyless, Floatie’s is rich in emotional texture, specifically a dream-pop softness that provides a critical counterbalance to their meticulous constructions. Lead single “Catch a Good Worm” finds both these elements colliding to sublime effect, with pinpoint shifts between math chug and dreamy sludge as Bern imagines “A pretty worm, alive inside / Another name, another try.” —Scott Russell

This unlikely pairing of British electronic wiz Sam Shepherd, aka Floating Points, and free-jazz saxophone titan Pharoah Sanders is among the most revelatory match-ups in recent memory. On their long-simmering album Promises, which also features the cinematic swells of the London Symphony Orchestra, the musicians’ collaborative energy proves as remarkably potent as it is improbable. Unfurling in one continuous, wordless composition split into nine movements, Promises sounds like a leap of creative faith, a cosmic communion that reaches across generations, genres and musical barriers to build something beautiful. When played without interruption and afforded the patience (and quality speakers) it demands, Promises is the kind of album that can rearrange the molecules in a room. It can imbue your drab apartment with a vast, cinematic weight. It can kill a party (this is admittedly speculative) in the best possible way. It can fill up the space while you wash dishes, put away laundry or water plants, infusing any mind-numbing household activity with a mist of supernatural yearning. —Zach Schonfeld

Jack Symes’ sophomore album Tompkins Park is an easy listen of bright, peaceful indie folk. Following his debut album Songs for Moms, Symes crafted his latest record on a road trip from Pasadena to Brooklyn as he moved homes amidst the pandemic. The album mulls over the isolation that naturally comes with such a journey, all against the quiet guitars and occasional sprinkling of a horn section that has become signature of the Jack Symes sound. Engaging percussive rhythms appear on single “I Need To Be Alone,” and work with a repetitive guitar to lend a doo-wop flavoring to standout track “Why, Why Not.” Deceptively lighthearted-sounding “Baby, My Baby” further rounds out the range of sound Symes incorporates into his work, bringing in the brass for an ironically happy punch to the song’s emphatic statement that “we’re all quite fucked.” —Carli Scolforo

After collaborating for more than a decade, the Norwegian duo of artist and writer Jenny Hval and multi-instrumentalist Håvard Volden have released their first album as Lost Girls, Menneskekollektivet (“Human collective,” from the Norwegian). The album draws on the creative chemistry Hval and Volden honed via their time performing together in Hval’s live band, as well as their 2012 collaborative album as Nude on Sand, but sounds quite unlike either of those efforts. Lost Girls began recording in March 2020, before the songs felt ready, and as a result, improvisation factors heavily into Menneskekollektivet, a surreal blend of synth loops and drum machines with Hval’s sometimes-spoken, sometimes-sung monologues, through which she brings her subconscious to the surface. “Making me an opposition,” she murmurs on “Love, Lovers,” entangled in her own mind, yet determined to capture her innermost wonder. —Scott Russell

Chicago-based multi-instrumentalist Sam Cantor has released the third full-length from his cosmic Americana project Minor Moon, Tethers, via Ruination Record Co. and Whatever’s Clever. Lead single “No Lightning Fix,” which features a pair of Cantor’s Windy City peers in V.V. Lightbody and Ohmme’s Macie Stewart, arrived alongside the album’s announcement in January, while second single “Under an Ocean of Holes” premiered at Paste in February and “Hey, Dark Ones” arrived earlier this month. Cantor drew inspiration for Tethers’ 10 tracks from an intense period of personal discovery that began with him being thrown for a loop by the end of a long-term relationship, using his music as an outlet for the powerful feelings entangled with his experiences. “Minor Moon songs have always had this arc of discovery and I’ve always used them as a way to dive into really personal, philosophical, or emotional problems,” says Cantor. “It’s about finding some truth looking inward.” We’ve praised Cantor and his collaborators for making a “sprawling and complexly arranged” album that “imbues warm Americana with an otherworldly hum” while managing to find a deep-seated joy in life’s lack of easy answers. —Scott Russell

On DEACON, serpentwithfeet presents Black queer love and joy more as a series of little everyday moments than an all-consuming, mystical force. While vivid details and a Black queer foundation are nothing new for the Ty Dolla $ign and Björk collaborator—on “fragrant,” from his 2018 debut LP soil, he recalled asking all of his ex’s exes one by one to kiss him—the presence of unbridled joy and love on his sophomore album is a striking sea change. Where serpent mourned fizzling loves on soil and debut EP blisters, here, he hails the simple glories and everyday little moments of thriving Black queer romances. His perspective, though a stretch to read as some sort of overt or grand political statement, is a beaming needle in the ever-cluttered, often redundant haystack of romantic music. —Max Freedman

Tune-Yards nearly ended in 2018 following the release of their album I can feel you creep into my private life. Tune-Yards’ Merrill Garbus used the record for some highly necessary introspection into how she, as a white woman creating music built on Afrobeat elements, was complicit in ongoing racism. Afterwards, she considered abandoning the decade-long project she’d worked on with her partner Nate Brenner. The pair took time to reacquaint themselves with their love of making music, not for a particular purpose but purely for their own enjoyment. Garbus also learned more about anti-racism through adrienne maree brown’s Emergent Strategy: Shaping Change, Changing Worlds. The result is sketchy., a summery record born of a messy, iterative creative process with a core message of social justice. Tune-Yards’ latest effort is doing a lot of heavy lifting as an LP, essentially justifying the continued existence of the group. “People come to us to be entertained. And then we also have a responsibility, I believe, to wake people up. Not to tell them how to feel—but to give them space to feel,” Garbus explains, and one can’t help but feel that it’s the thesis statement of the album and a new mission statement for the band. And honestly, she and Brenner pull it off. Over the course of sketchy., Garbus examines sexism, gentrification and environmental destruction, managing to balance catharsis and sonic revelry. —Clare Martin