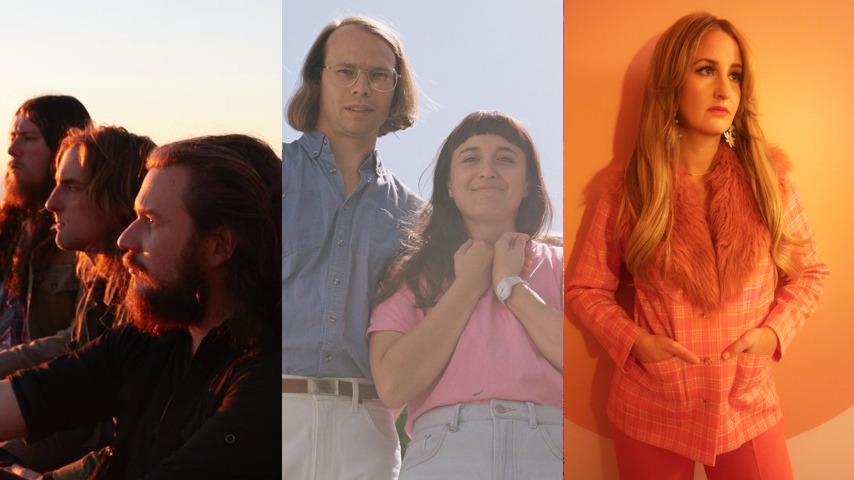 During this little ongoing global crisis we like to call the coronavirus pandemic, it’s often productive to stop thinking about doom for a moment and find some joy in the little things. Here, I’ll start: It’s not raining today. New episodes of The Real Housewives of New York City are currently airing on Bravo. This all-female mariachi band exists. Hamilton, the musical, is now available for everyone to watch and love. Baseball is back soon. See, wasn’t that easy? Now if we can only keep that positive energy flowing into the weekend! New albums are another small-in-the-grand-scheme-of-things occurrence we can take delight in, and it just so happens today brings a jumble of exciting releases. My Morning Jacket surprised us with part two of 2015’s The Waterfall, everyone’s favorite New Zealand four-piece The Beths are back and groovy country singer Margo Price released a real stunner. Find all that and more below.

New Zealand indie-rock quartet The Beths today release their sophomore album Jump Rope Gazers via Carpark Records. Jump Rope Gazers follows The Beths’ 2018 debut album Future Me Hates Me, which put the band on the map on a global scale. In fact, the success of the album has had the band in a period of almost perpetual globetrotting while touring. Much of Jump Rope Gazers grapples with the prospect of being far away from home while also having a hunger to flourish in one’s craft. —Natalia Keogan

Terrace Martin, Robert Glasper, Kamasi Washington and 9th Wonder have joined together under the name Dinner Party. “Freeze Tag,” the first track released off of the group’s self-titled debut album, Dinner Party, out today, contrasts cheerful production and silky vocals with thematic explorations of police brutality and systemic racism, topics that are especially relevant during the biggest civil rights movement of the 21st century. “They told me put my hands up behind my head / I think they got the wrong one,” sings guest vocalist Phoelix. “I’m sick and tired of runnin.” The track’s accompanying video, released on June 24, features footage of the group in the studio during the recording process. Meeting at a jazz band camp in 1996, Martin and Glasper came up with the idea for Dinner Party while touring with Glasper’s R+R=NOW, pulling Washington and 9th Wonder in down the line. With Martin and Washington on saxophone, Glasper on keys and 9th wonder doing production, the single is a masterful family affair. —Lia Pikus

The new posthumous album from late Chicago rapper Juice WRLD arrives today. Legends Never Die is out today on Interscope and features a recently released collaborative song with Halsey called “Life’s a Mess,” which you can listen to below. Juice WRLD died at 21 in December, and two other singles, ” “Righteous” and “Tell Me U Luv Me,” have been released since his death. —Ellen Johnson

That’s How Rumors Get Started is Price’s third LP as a solo artist, after three previous albums fronting the Nashville band Buffalo Clover. If that group had a shaggy late-’60s blues-rock bent à la Big Brother and the Holding Company, Price certainly leaned more toward the sound of fiddles and pedal steel guitar on Midwest Farmer’s Daughter in 2016 and All American Made in 2017. The latter even featured a duet with Willie Nelson. This time around, there’s as much blustery rock and hard-edged soul as there is country twang. —Eric R. Danton

Linkin Park’s Mike Shinoda has spent quarantine creating. No, really: The singer has been hopping on Twitch daily to write and record music live in front of (and sometimes with) viewers and fans. The fruit of that labor arrives today in the form of Dropped Frames, Vol. 1, his new album. “Dropped Frames is just as much about the live channel as it is about the ‘album’,” he said in a statement. “The collection of songs is a highlight reel of the tracks I make on the channel, but a big part of the experience is the stream itself. When I start, I usually have very little idea of where it will go. What comes out is a product of the viewers’ suggestions, my spur-of-the-moment ideas, and whatever inexplicable magic is floating in between.” —Ellen Johnson

6. My Morning Jacket: The Waterfall II

My Morning Jacket just this week announced their new album, The Waterfall II, out today via ATO Records. It’s the first new album from the band in five years, and comes from the over two dozen songs the band recorded at the mountaintop studio of Panoramic House, the first half of which they released with 2015’s The Waterfall. The new album will be available on CD and vinyl on August 28. “As James reveals, the decision to unearth The Waterfall II was sparked from a bit of serendipity in the early days of self-quarantine,” the band said in a statement. “While out on a walk, he placed his music library on shuffle and soon stumbled upon ‘Spinning My Wheels,’ a tender rumination on the struggle for presence, its lyrics confessing to feeling ‘hypnotized from doing the same old thing.’” —Jack Meyer

British synth-pop crew NZCA Lines have released their new record Pure Luxury via Memphis Industries. Single “Prisoner of Love” is extravagant, sporadic and imbued with disco, showcasing grandeur as well as notes of anxiety and the apocalypse. Of the song, frontman Michael Lovett said, “This song is about the cycle of heartbreak and dependency within a relationship that isn’t working, a constant motion of being pushed away and sucked back in. Both people could be doing this, each at the mercy of the other’s emotions – unable to move forward yet unable to step away, the cycle repeats itself.” —Danielle Chelosky

Acclaimed singer/songwriter Rufus Wainwright returns today with his ninth studio album and first since 2012. Ahead of release, Wainwright shared single “You Ain’t Big,” which finds him returning to his lush acoustic pop. “The song at heart is apolitical,” Wainwright said of “You Ain’t Big.” “Its vintage sound harkens back to the classical American country music sound of the 40s and 50s and with the help of opposing images in the video of how different life was for white people compared to black people in the 1950’s, as it has sadly remained, I think it rings appropriate for this time and professes a certain truth.” —Ellen Johnson

9. The Streets: None of Us Are Getting Out of This Alive

The Streets’ Mike Skinner and Tame Impala’s Kevin Parker recently teamed up for a new single appropriate for the social distancing age. “Call My Phone Thinking I’m Doing Nothing Better” is the first track from The Streets’ new mixtape, the not-so cheerfully titled None of Us Are Getting Out of This Alive, out today via Island Records. The video oscillates between Skinner, skiing and being glued to his phone, and Parker, stationed in what looks like a sunny Los Angeles. “Call My Phone Thinking I’m Doing Nothing Better” showcases Mike Skinner’s skilled wordplay, like the verse: “You call and call my phone, thinking I’m doing nothing better / I’m just waiting for it to stop so I can use it again / Love isn’t a riddle, love isn’t made to be hard / You know I’d give you my kidney, just don’t ever take my charger.” The new mixtape is Skinner’s first full-length project as The Streets since 2011’s Computers and Blues. —Isabella DeLeo

Athens-based singer/songwriter and rocker Tedo Stone returns today with his fifth LP Same Old Kid. Stone has released a few songs leading up to the album, including a collaboration with Charleston band The Artisanals, “Town After Town.” “This is one of the older songs we put on this album,” Stone told Immersive Atlanta. “I wrote and demo’d this with my buddy Clay Houle of the Artisanals when he was still in our band and then I kind of forgot about it. When Drew Beskin and I were writing songs for Same Old Kid he kept begging I give that song a chance. Once we got the band on it everyone really fell in love with it. It’s a rocker but a perfect way to end our album. I’m glad we finally put it on a record.” —Ellen Johnson