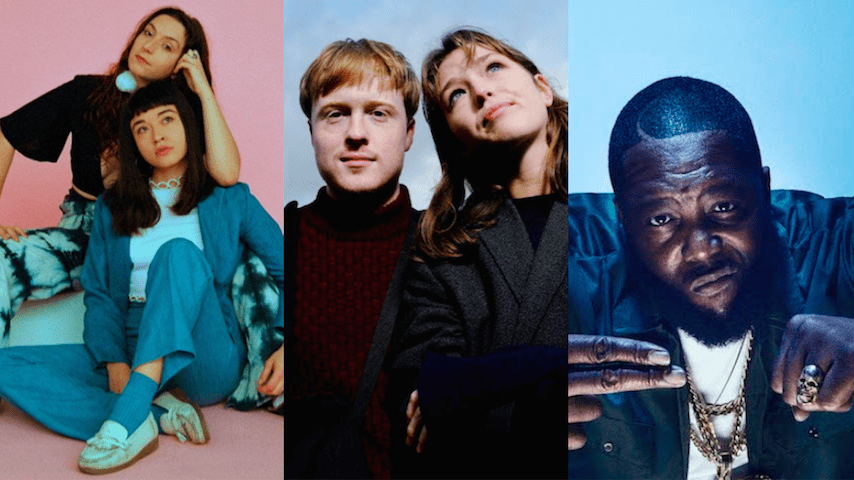 This list of 10 albums is far from the most important thing you’ll read today. Don’t read this list until you’ve perused our resource guide for anti-racism and donated to organizations that are fighting against injustice and police brutality. Once you’ve done that, feel free to dive into some of the best new music out today (June 5). This New Music Friday features the long-awaited Run the Jewels album (which actually dropped two days early if you’ve somehow managed to direct your attention away from the country’s unrest for a moment—though the LP touches on that as well), plus the latest full-length from eccentric Chicago rockers Ohmme, the mind-numbing EP from London duo Jockstrap and much more. From noise-punk and electro-pop to folk and rap, we’ve got you covered on the music front this week.

Berlin-based electronic provocateurs Amnesia Scanner have released their second album via PAN, the follow-up to 2018’s Another Life. The record, titled Tearless, features popular hardcore group Code Orange as well as Lalita and LYZZA. The duo’s album was inspired by environmental issues facing their home country of Finland before the COVID-19 outbreak. Described as a “breakup album from the planet,” their new material seems increasingly relevant as we venture further into uncharted territory thanks to the universal lockdown we’re facing. —Austin Jones

London duo Jockstrap (aka Georgia Ellery and Taylor Skye) have shared Wicked City, their second EP and debut for Warp Records. It follows 2018’s Love is the Key to the City. Jockstrap are quite enigmatic in sound—take “The City,” for example, which fuses glitchy industrial with showtune-y piano pop and glazed post-punk, and though that sounds insane on paper, it’s not only mind-numbingly fascinating, but also surprisingly coherent. “The heavy autobiographical narrative of Wicked City is married to an expressive and limitless sound world; influenced by everything we have ever musically absorbed and moulded with a ‘fuck it’ attitude,” Ellery says. You can certainly hear that “fuck it” ethos on this EP. Their strange, harsh-meets-soft pop is paired with poetic tales, and it’s the sound of deconstruction and reinvention—both sonic and emotional. —Lizzie Manno

L.A. noise-punk outfit No Age have shared Goons Be Gone, the full-length follow-up to 2018’s Snares Like a Haircut, which Paste described as “motion, motion, motion, noise, noise, noise” and “the musical equivalent of burying your head in the sand.” Goons Be Gone is exactly the kind of layered, invigorating clamor we’ve come to expect from No Age, but it still feels fresh. Their offbeat, self-recorded samples mingle seamlessly with their rugged human elements—it’s a cacophonous album, for sure, but don’t discount the grace of its rhythms and mindfulness of its construction. —Lizzie Manno

This week, rap duo Run the Jewels released their first album in four years, RTJ4, and due to the present explosive tension in America, they decided to share it two days early. “Fuck it, why wait?” they said in a press statement. “The world is infested with bullshit so here’s something raw to listen to while you deal with it all. We hope it brings you some joy. Stay safe and hopeful out there and thank you for giving 2 friends the chance to be heard and do what they love.” The album, which features appearances from Mavis Staples, Pharrell, 2 Chainz, Rage Against the Machine’s Zack de La Rocha and Queens of the Stone Age’s Josh Homme, spans themes of systemic oppression and personal struggles, and though that’s nothing new for the group, these songs hit especially hard right now. Killer Mike and El-P wrote and recorded the album back in 2019, but many social media users were so shocked at its prescience that they speculated whether the album was amended after the tragic killing of George Floyd and subsequent nationwide protests. —Lizzie Manno

8. Sarah Jarosz: World On The Ground

9. Tenci: My Heart is An Open Field

Tenci, the moniker of Chicago-based musician Jess Shoman, has released her debut album, My Heart Is An Open Field, via Keeled Scales. Shoman announced the record alongside the music video for “Joy” and “Joy 2,”—a seven-minute display of intimate sketches of friendship and idle traveling. “Joy is an emotion that’s always fleeting. You race to find it so you can fill yourself up, but just as quickly it can leave you,” Shoman says. “It’s a name that I’ve given to new love, a cake that sits out too long, the breeze, desire, solitude. The moments where you lose this feeling are just as important as when you have it. There’s comfort in knowing that Joy will always be there in between the moments of self-doubt.” —Natalia Keogan

10 Westerman: Your Hero is Not Dead

British electro-indie musician Westerman (aka Will Westerman), who Paste named one of the 15 British Artists You Need to Know in 2019, has released his debut album, Your Hero Is Not Dead, via Partisan/Play It Again Sam, which follows his 2018 Ark EP. His debut contains themes surrounding moral, ethical and political ambiguities while also being a contemplative inward look at Westerman’s own life. —Natalia Keogan