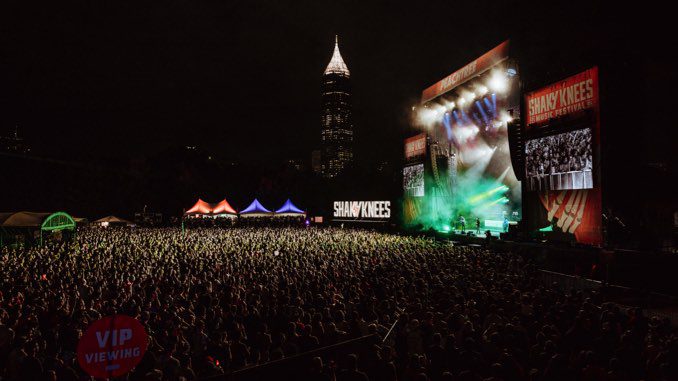 It’s been nearly two and a half years since Paste Music’s last Shaky Knees, so to say we’re excited to slap on our masks and get back out to the function is a major understatement. After taking 2020 off, the indie rock-forward festival is returning to downtown Atlanta’s Central Park this weekend, Oct. 22-24, with an impressive set of artists, both established and up-and-coming, in tow. Though we were bummed to see living legend headliner Stevie Nicks bow out—of both Shaky Knees and all of her other 2021 performances, citing COVID concerns—go-to big-stage rockers Foo Fighters stepped in to play Friday’s final set in her stead, with Run the Jewels and The Strokes to close out Saturday and Sunday, respectively. Our goal for this preview, though, is to drill down past those big names and into the small print on the lineup poster, flagging the hidden gems you can’t miss if you’re fortunate enough to be in attendance. See the 10 Shaky Knees 2021 sets we’re the most amped to catch below, and check back with Paste after the fest for a rundown of the highlights.

London-based singer/songwriter Arlo Parks was having a massive year even before she won the 2021 Mercury Prize, for the U.K.’s album of the year, on the strength of her universally acclaimed debut, Collapsed in Sunbeams. One of Paste’s top albums not only of January, but also of the mid-year, Parks’ first full-length cemented the 21-year-old as a singer and songwriter to watch, with Paste contributor Max Freedman praising her “intimate, you-had-to-be-there details and unyielding, wise-beyond-her-years empathy.” Parks has spent 2021 performing on the biggest stages of her career (pandemic permitting), winning awards, and covering everyone from Phoebe Bridgers to Frank Ocean in her YouTube “Lofi Lounge,” and she has nowhere to go but up.

Another artist on the rise in a major way, Bartees Strange kicked indie rock’s door down last year with Live Forever. The Washington, D.C.-based, genre-defying singer/songwriter (and sought-after, prolific producer) released his 2020 standout of a debut album in the thick of the pandemic, and is only just now getting the chance to take it on the road. All indications are the charismatic artist is having a blast with that, sharing stages with Lucy Dacus, rocking sold-out shows and high-profile festival sets (Governors Ball, Pitchfork Music Festival) alike, and generally making up for lost time. His Shaky Knees set is one of Day 3’s earliest, but we’ll be there with bells (read: sunblock) on to join in the fun.

Though they’re often discussed in the context of the South London rock scene, and their idiosyncratic peers like Squid and Black Country, New Road, there’s only one black midi. The band first built their substantial buzz entirely by virtue of their live show, which has been known to feature extreme volume, high energy, and zero banter (or even pauses between songs). By all accounts, their stage presence is as strange and enthralling as their music, which has utterly confounded both description and expectations across the band’s first two albums, Schlagenheim (2019) and Cavalcade (2021). Chances are, many Shaky Knees attendees will skip black midi’s Sunday night set in favor of an overlapping Modest Mouse’s—opt for the smaller stage, and your reward will be one of the festival’s most unforgettable performances.

This is a big month for buzzy Brooklyn rockers Geese, who will play their first-ever festival set at Shaky Knees on Saturday afternoon, just days before the Oct. 29 release of their debut album, Projector, via Partisan/Play It Again Sam. The band—singer and lead songwriter Cameron Winter, guitarist Gus Green, guitarist Foster Hudson, bassist Dom DiGesu and drummer Max Bassin, the oldest of whom just turned 19 (!) this spring—have made numerous appearances on Paste’s best new song lists in the lead-up to Projector, channeling a kaleidoscopic set of influences (including everyone from Pink Floyd to the aforementioned black midi) into their unpredictable torrents of post-punk, dance-rock, psychedelia and so on. You’re going to want to get ahead of the curve on Geese, and this is a golden opportunity to do it.

While many of the acts highlighted here are in the early stages of their ascensions, English rockers IDLES are on the more established side, and Shaky Knees attendees will be catching them during a key transition period. The 2019 Mercury Prize nominees recently announced their much-anticipated fourth album, CRAWLER, surprisingly co-produced by breakout hip-hop producer Kenny Beats (Vince Staples, slowthai), and shared a statement-making lead single in “The Beachland Ballroom.” Not content to simply rest on their ferocious shout-sung post-punk (or beloved live act) laurels, IDLES are headed in a fresh and unexpected direction, and though their Saturday night set clashes with Alice Cooper’s, you can bet we’ll be going along for the ride.

Another artist in the midst of a breakthrough 2021, Arizona-born, Nashville-based singer/songwriter Joy Oladokun will share the famed Ryman Auditorium stage with Jason Isbell & The 400 Unit the night before her Sunday afternoon Shaky Knees set, with her first-ever headlining tour to follow in the spring. Inspired to pick up a guitar at age 10 after seeing a Black woman (the great Tracy Chapman) play for the first time, Oladokun made her major-label debut over the summer with in defense of my own happiness, a sweeping, yet intimate collection of soulful folk-pop songs that features collaborations with Maren Morris (“Bigger Man”), Jensen McRae (“wish you the best”), and Penny & Sparrow (“heaven from here”). Oladokun—aka “the trap tracy chapman,” as her Twitter bio reads—makes powerfully emotional music, but is quickly becoming known for her funny and engaging stage presence, making her Day 3 set a must-see.

Born Kenneth La’Ron, genre-bending rocker KennyHoopla’s musical sensibilities were shaped early on by everyone from Tupac to All-American Rejects, and his output to date has been equally wide-ranging. The artist (whose stage name references SpongeBob) started self-releasing music on SoundCloud in 2016, and has since risen to rock stardom (and an Arista Records deal) by marshaling new wave, indie rock, hip-hop, emo and punk sounds, to name a few. Earlier this year, he dove headfirst into pop-punk on SURVIVORS GUILT: THE MIXTAPE//, a full-length collaboration with blink-182’s Travis Barker—writing and recording alongside a musician he grew up idolizing. And though he’s typically quite self-critical in interviews, KennyHoopla recently told Apple Music 1’s ALT CTRL Radio, “I feel like my performing is one of my biggest strengths and a reason that I’ve gotten to this level, whatever level that is.” You can see what he means this Saturday afternoon.

Atlanta’s own Lunar Vacation will make their full-length debut with Inside Every Fig Is a Dead Wasp (Oct. 29, Keeled Scales), just days after their Saturday night Shaky Knees set. Anchored by co-founding songwriters, vocalists and guitarists Grace Repasky and Maggie Geeslin, the four-piece drew inspiration from acts like Rilo Kiley and Alvvays in assembling their first album, working alongside producer Daniel Gleason (of Grouplove) to craft a collection of bright, hooky rock songs like “Shrug.” Their irresistible sound and close-knit chemistry as a band make for a lovely live show, as well—when Paste hosted a Lunar Vacation session during SXSW 2019, we likened it to “a party, one you’re invited to, as well.” That couldn’t be more apropos at Shaky Knees, Portugal. The Man overlap be damned.

Masked Canadian country crooner Orville Peck has been both enigmatic and iconic since he burst onto the scene with his self-produced debut Pony, one of 2019’s best country albums. Met with widespread acclaim, the anonymous artist has since signed to Columbia Records, released his 2020 Show Pony EP, collaborated with the likes of Shania Twain and Lady Gaga, and become the face of everything from Fender to Wrangler. But most of all, Peck has been out on the road, sharing his acclaimed blend of classic outlaw country, art-rock innovation and poignant queer storytelling with audiences. There’s no better way to experience the songs that made the masked singer a star than to hear his sonorous voice for yourself.

if there’s one surefire way to start your Shaky Knees weekend off right, it’s with White Reaper’s Friday afternoon set. The Louisville, Kentucky, quintet are known for their hooky, high-energy rock, a natural fit for arenas and the garage alike. Their three albums—2015’s White Reaper Does It Again, 2017’s The World’s Best American Band and 2019’s You Deserve Love—have consistently satisfied, but it’s White Reaper’s live show that really sets them apart: “The cliché ‘They’re better live’ was invented for bands like White Reaper,” wrote Zach Schonfeld in his review of the band’s second LP for Paste. “The records are good, but onstage is where the band’s wonderfully scuzzy blend of pop-punk and garage rock goes stratospheric.” You couldn’t ask for a better Day 1 shot of adrenaline.

Scott Russell is Paste’s music editor and he’ll come up with something clever later. He’s on Twitter, if you’re into tweets: @pscottrussell.