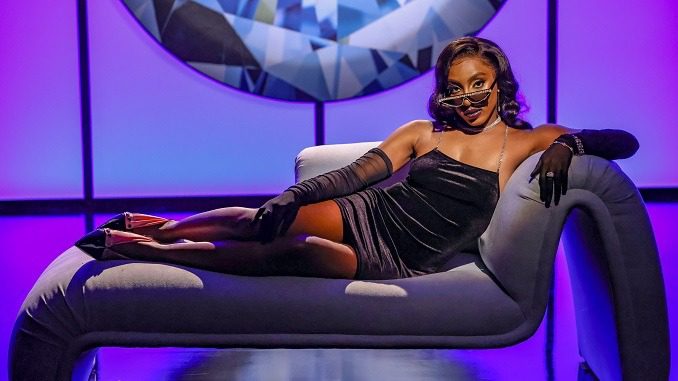 “My greatest hope is that all of these societal issues are solved and my songs are irrelevant.” Nigerian-American comedian Ziwe lets out an earnest laugh alongside me as we discuss the satirical musical segments of her forthcoming A24 produced Showtime series ZIWE, a variety show in which the comedian is every episode’s musical guest. ZIWE’s pop music is a continuation of the political aims embedded in her debut 2018 EP Generation Ziwe. On it she critiques the myriad of injustices woven into the American social fabric. For example, in the EP’s leading single and all-around twerk anthem “Make it Clap for Democracy” Ziwe encourages Lady Liberty to “shake that ass.” Hilarious. But the lyrics also remind her listeners that Trump’s administration would gladly “disenfranchise every one of [us] hoes” by purging voter lists. On “Universal Healthcare,” the EP’s final track, Ziwe cogently asks over a trap beat “what the fuck is a deductible?” Premium Grade A+ question.

One of Ziwe’s greatest comedic strengths is understanding how to employ humor through various means—music, sketch comedy, interviews, etc.—to highlight the absurdity of our American reality and the fundamental discomfort people have with discussing this nation’s legacy of racism, sexism and injustice on the whole. On her Instagram Live series Baited with Ziwe, Ziwe interviewed iconic guests like internet celebrity Caroline Calloway, Alyssa Milano, and Slave Play playwright Jeremy O. Harris, among others. Through the series and its increased popularity during the summer of 2020, Ziwe became renowned for unabashedly asking her predominantly white guests confrontational questions about race.

The legacy of her live series carries over into her Showtime show. In the official promotional video for ZIWE, which premieres on May 9, the comedian asks notorious New Yorker Fran Lebowitz “what bothers you more, slow walkers or racism?” Because of this brand of humor and her refusal to hand anyone an “ally cookie” for basic interpersonal decency, some might misinterpret Ziwe’s satire as elevated trolling—bullying masquerading as niche comedy. But if one only looks closely enough it becomes abundantly clear that Ziwe is deeply uninterested in tearing any individual guest down but rather drawing attention to the discomfort people have with the possibility of discomfort itself. Her comedy is crafted to showcase how fearful people are of saying the “wrong thing” or revealing gaps in their knowledge. Ziwe’s comedy implicitly asks “why are people more afraid of appearing racist, sexist, etc. than actually being any of those things?” When Ziwe asks “what the fuck is a deductible?” over a trap beat it’s because that a funny thing to do. But it also gives listeners time to reckon with the fact that healthcare in America is so unnecessarily complicated and inaccessible that it took a talented comedian and a trap beat for them to sit and intentionally ask themselves why and question if it has to be.

When I asked Ziwe about her brand of humor, which some have dubbed cringe comedy, she concurs that her art isn’t about being biting or topical. Rather comedy is the way she knows to navigate her own trauma: “I have been in a myriad of awkward shit situations all my life where I was forced to talk about race. And in those awkward, cringey situations that were happening in my real practical life I found humor in that trauma. Because you talk to these people as they corner you in a bar and go ‘I wish someone could have watched that conversation, it’s so ridiculous, it’s so absurd.’ I took these life experiences—art imitates life— and translated into my work. Its [the comedy] as organic as experiencing these conversations all my life, every day since I could speak.”

The music of ZIWE, like the comedy of the show on the whole, provides a sense of catharsis for Ziwe. “I’m trying to heal myself through my art and hopefully heal other people,” she says. “I process trauma with comedy, it’s how I compute things. So that’s what you’re seeing in my comedy—awkward, cringe, discomfort—because that’s what we’re all processing together.”

Because Ziwe’s comedy does lead with the elements of anxiety that stand-ups and comedy writers so often attempt to more subtly address in their comedy or bury altogether, it is easy to forget that her frontloading of the discomfort is her way of bringing people together. Finding her own peace in the comedic chaos she conjures. I was curious about how Ziwe navigates the pressure to be “on”—to make work and music that feels authentic to herself without feeling pressure to pander to whatever flavor of Twitter irony is popular this month. To my delight, she spoke about James Baldwin.

Baldwin made an appearance on a 1969 episode of the Dick Cavett show. Clips from the segment are featured in the Oscar nominated 2016 documentary I Am Not Your Negro.

In the interview Cavett nervously, caucasiously remarks that James Baldwin must frequently be asked “why aren’t the Negroes optimistic” considering the proliferation of Black mayors, popular artists, etc. Baldwin replies that this optimism white Americans keep waiting for Blacks in America to have is a myth and that the real question is “what’s going to happen to this country?”

What Ziwe appreciates so much about this interview, she tells me, is that “the conversation he’s having still feels relevant today even though it was literally several decades ago.” The allure of internet fame or the spectacle of comedic trolling is not Ziwe’s compass. Rather, like Baldwin, she aims to provide the kind of social commentary and cultural analysis that still feels prescient decades from now. “I can’t predict what the trends are going to be in a year or ten. All I can do is make art that feels important today with the hopes that importance still carries weight in a decade or two. When you focus on making art and work that has more meaning than just the trend that’s when you really hit the sweet spot.”

Her note on dancing to the comedic rhythm of her own drum makes sense considering that Baited and the resulting attention she gained for talking about race during bummer summer—our first pandemic summer, which was also plagued with the high profile Black deaths of George Floyd, Breonna Taylor, and Oluwatoyin Salua, among others—comes after years of uploading this distinctly Ziwe style of comedy videos to her YouTube page. “I let my art grow as I grow as a person. So with Baited and my YouTube series and Instagram Live series, these are all variations that I have been doing for literal years. And then suddenly it meets a historic moment and it feels topical even though it was created five, six, seven years ago. So I’m not looking to chase trends with my art. I’m looking to hit subjects that affect our lives now and forevermore.”

Now that Ziwe does have our attention between her Showtime series and an in-progress book of essays titled The Book of Ziwe, we all get to belly laugh and intermittently wince at what she refers to as her “sarcastic, acerbic wit.” And lucky us. Showtime generously granted me access to clips from ZIWE. Although I am not allowed to discuss the premise or delivery of any of these sketches or songs with specificity I will say that the show is cutting and clever and generated the sense of catharsis within me that Ziwe spoke of striving for herself. When discussing her aims for the show and the discourse she hopes to generate Ziwe asserts, “I’m trying to facilitate a world in which it’s okay to talk about race and not have all the right answers—but being open and willing to grow and learn. That’s my intention. But ultimately it’s all about comedy. So if I am not funny, I am not really doing my job. First and foremost make people laugh and then ease them into these conversations that are at the genetic make-up of our country.”

Adesola Thomas is a screenwriter and culture writer. She loves talking about Annette Benning’s performance in 20th Century Women and making lasagna. You can follow her on Twitter.