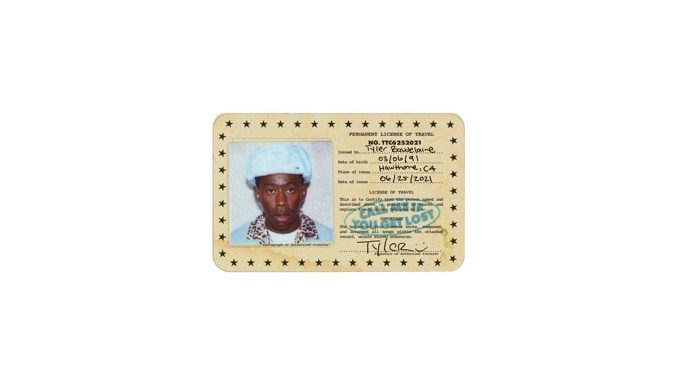 When Tyler, The Creator stepped onto the Grammys stage in early 2020 to collect his Best Rap Album award for 2019’s IGOR, the air outside Staples Center was solemn, the crowd inside mostly unaware of the tragedy that had occurred up north off the freeway in Calabasas mere hours before the ceremony. “I don’t know if I’m gonna be up here again,” Tyler deadpanned to the crowd, just as ESPN started breaking the news of Kobe Bryant’s death to the millions tuning in. Some guests in attendance stood, cheering for Tyler as he seized the moment, thanking and hugging his tearful mom, Louisa. Others remained in their seats, clapping sporadically, watching how the limelight was now bestowed upon one of Southern California’s most gifted sons. The kid who transformed Fairfax Avenue with a multi-million-dollar fashion line, a critically revered record and a decade-long personal metamorphosis was finally getting his due—receiving standing ovations from industry heads 10 rows back. But outside the arena, the heart of Los Angeles was breaking—a city split down the middle with grief, forced to reckon with an unimaginable and unexpected loss.

Less than two months later, the United States was in lockdown and Tyler found himself in a studio somewhere in the mountains. A few Instagram posts—including a clip of him accompanied by two keyboards, playing an early draft of an unknown instrumental that’s now recognizable—and captions edited to resemble entries on a tracklist, and his fanbase began to suspect a new album was on the horizon. When billboards adorned with the words “CALL ME IF YOU GET LOST,” pastel stars and a mysterious phone number—with various recordings waiting for callers on the other end—started popping up in Downtown L.A., a year’s worth of speculation became an urgent reality.

Tyler was back—etching another chapter into his “every two years” album cycle schedule. In the eight days between Call Me If You Get Lost’s announcement and its release, questions arose about whether Tyler could live up to the confessional plots of Flower Boy and IGOR or not—if two years was enough time for him to forge a banger from the interstellar debris of the two projects that transformed his entire catalog. But Call Me If You Get Lost delivers, by way of investigating a part of Tyler we’ve not yet seen on any of his previous projects: transparency. Where Flower Boy and IGOR found Tyler’s unreliable-by-ambiguous-default narrators using an album platform to admit to something, Call Me If You Get Lost puts the pleasures, critical exhaustion and romantic ruins of Tyler’s life behind the scenes on full display with celebratory, and sometimes brutal, honesty.

On Call Me If You Get Lost, Tyler rolls out of bed in a Goblin-era headspace lyrically, syncing his flamboyant, gut-wrenching turmoils and triumphs with instrumentals as polished and meticulous as those on IGOR. But the ritzy vibes of IGOR’s story, and the protagonist we had no choice but to feel empathy towards, were only momentary spoils. When Tyler ditches the bloat of IGOR’s self-doubt and puts himself out on the line while he’s still drawing it, there’s a newfound confidence afoot—even when navigating a world where the person he’s in love with is dating someone else. And only Tyler could throw not one, but two eight-plus-minute symphonies (“SWEET / I THOUGHT YOU WANTED TO DANCE” and “WILSHIRE”) about that unrequited love into the guts of a project brimming with sub-three-minute cuts of flex-swollen bars and award-winning ooze.

Tyler possesses two abilities that few current artists share, in that he knows exactly how to elevate the strengths of everyone he works with and he isn’t afraid to put his feelings on caps lock. On “HOT WIND BLOWS,” he layers a Lil Wayne verse perfectly over a flute-driven, ‘70s elevator music-esque backing track. In “WUSYANAME,” he brings NBA YoungBoy and Ty Dolla $ign in to steal the show, having each artist soulfully glide across the track’s two minutes wrapped in a velvet blanket of patient, sharpshooting finesse. “LUMBERJACK” loudly mines Tyler’s post-IGOR successes and industry criticisms—including selling out Madison Square Garden, dismissing a momentary Billboard Chart beef with DJ Khaled and taking home the Best Rap Album Grammy a year later. “MANIFESTO” ruminates on performative social media accounts in conjunction with cancel culture, emphatically showcasing how far Tyler has come and the patience he’s acquired in the years since the teenage outbursts Twitter used to suspend his account for.

Though Call Me If You Get Lost is Tyler’s longest project since Cherry Bomb, the 16-song tracklist, clocking in at 52 minutes, doesn’t sprawl or slump. DJ Drama’s theatrical, humorous chatter scattered across the album makes it bleed like a mixtape. And even the record’s biggest pauses—showcased when his mom Louisa gets her own track (“MOMMA TALK”), or when Tyler rambles a humorous monologue about the magnitude of the fortunes he’s acquired in life (“BLESSED”)—highlight the reliable but isolated eccentricities this record is written around, and ones we’ve become accustomed to: Gleams of newfound appreciation for our loved ones and possessions during a period of heightened loneliness. Despite COVID-19 restrictions loosening in the U.S., Tyler vigorously transporting himself and the listener from place to place on this record—with his day-ones still by his side—still feels like a fever dream we’ve forgotten how to be a part of. But in the time since IGOR’s release, New Zealand, Australia and the United Kingdom have lifted their lifetime bans on Tyler, making Call Me If You Get Lost’s recurring themes of travel, whether by passport stamp or six-figure cars, all the more timely and earned.

But where the record ends in “SAFARI” is, in DJ Drama’s own words, remote. When Tyler left the Staples Center with the music industry’s respect and a shiny, gold phonograph to show for it a year ago, he was walking back into the streets of a city whose identity was hijacked by tragedy. In the months after, he walked the globe, building a lavish car collection, taking ski trips and having intercontinental make-out sessions—all while simultaneously cataloging the immense praises, critiques and fallouts from IGOR, repairing the masses’ assumptions that pre-Flower Boy Tyler was gone by showcasing how the sounds, flows and attitudes of his work from a decade ago are very much still alive and breathing inside the mythos of his artistry.

Call Me If You Get Lost doesn’t strike the same emotional resonances as Tyler’s last two LPs, but it isn’t meant to. When that piano and brass section pulsates behind Tyler on “RUNITUP,” you might think of the lingering horror orchestras that engulfed Wolf. Or when his vocal delivery on “LEMONHEAD” rushes and thrashes, you’re transported back to listening to a kid figuring himself out on Goblin. That’s the crowning achievement of this record—the way it sharply reminds every listener that the early entries in an artist’s discography are not parts of their past meant to be forgotten. For Tyler, the recklessness of his 20s did not leave him among the ruins of early-2010s hip-hop, but rather has helped make him a 30-year-old with a multi-million-dollar confidence and a Rolls Royce collection to flaunt—in an industry praying just to catch up.