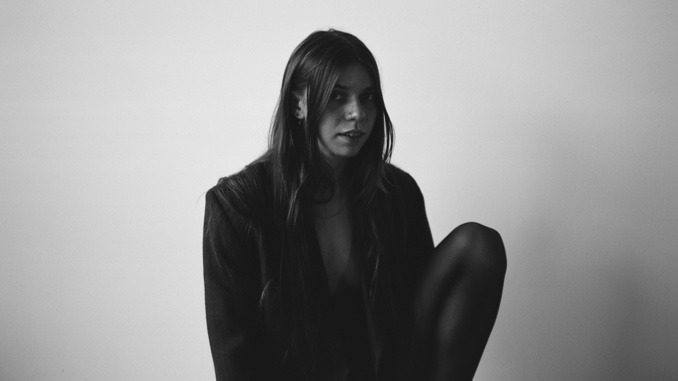 It’s okay to not have the answers. Despite what school, algorithms or capitalist institutions might expect, not having all the answers is both normal and healthy. While artists can often help provide some of those answers, they, too, are people searching just like everyone else. This has proven especially true over the past few years, as many of the core beliefs and rituals of daily life have faltered and shifted. Sarah Beth Tomberlin faced all of these events as not only a person, but also as the artist Tomberlin. Against the backdrop of the pandemic, she worked on the follow-up to her acclaimed debut, a challenge for a musician that is never to be taken lightly. In the process of making that sophomore record, i don’t know who needs to hear this…, Tomberlin found time she didn’t know she needed and discovered that sometimes not knowing all the answers is the answer.

From the jump, Tomberlin knew she wanted to go in a new direction with her sophomore album, as evidenced by the album’s second single “happy accident,” which features a rich electric guitar and a fuller sound than any of her previous work. “I knew that I wanted a bit more instrumentation, and I had wrestled with what that would be,” she told Paste in early April, referring to the sparse, mainly acoustic sound of 2018’s At Weddings. Her 2020 EP Projections served as the perfect training ground, allowing her to explore what was to come next. “Part of the reason I wanted to do an EP was to just play and have fun, and just be a little bit carefree about it before going into LP two, and just experiment,” she says. While Projections still leans more acoustic than the spacious, sprawling idkwntht, the act of trying something new is just what Tomberlin needed.

Tomberlin was also more intentional and focused towards the album this time around. She describes the process behind At Weddings as a happy accident, with the record only happening after she realized she had a collection of songs she liked and went together. This time around, she knew she was working towards a new album and a new sound from the start. “With this record, I got to map it out as I was going along. I definitely knew that I wanted a bit more instrumentation, but as the songs presented themselves to me, I started getting a sonic palette of instrumentation I was interested in,” she says. While she still wrote all of the tracks on an acoustic guitar, she knew many of them wouldn’t stay that way once she got them into the studio. While her process has evolved, Tomberlin doesn’t view it as more or less difficult, just different. If anything, she says any added pressure only comes from herself with the knowledge she has an established audience listening to her work now.

In another change from Tomberlin’s previous work, she recorded idkwntht almost entirely live. For Tomberlin, who almost always plays by herself when she’s touring, being able to play with other musicians live was a dream. “It truly gives me so much joy. I was just simply giddy, but I got to play with extremely gifted musicians who were somehow moved by my music and my playing,” she says with a sheepish laugh. The results speak for themselves on the record, with each instrument perfectly balanced with each other and with the vocals. The experience also provided a lived-in feel to the album that Tomberlin enjoys, citing the various laughs and background noises, like the sound of someone physically stopping the tape at the end of “unsaid,” that were left on the recording in order to truly capture the experience.

Listening through idkwntht, one of the major recurring lyrical themes is being able to contemplate and reflect on the questions of living and our emotions, exemplified by tracks like “born again runner,” which finds Tomberlin confronting the often overwhelming hardship of the current world and and expressing her uncertainty about religious belief, eventually arriving at the conclusion that hope is still possible. These questions of faith and belief have always been parts of Tomberlin’s life, as she was homeschooled in a Southern Baptist household. “It’s gonna always infiltrate how I process information, even if I don’t believe all of it, necessarily. It’s always gonna be a lens to look through, to consider alongside my own kind of worldview and compass that I’m paving out for myself,” she explains. While she acknowledges that conversations about faith and belief are often subsumed by religion, idkwntht reaches beyond that to simply believing in the power of love and acceptance in the face of uncertainty. She says, “I think what’s missing in our lens of what we expect from others and from ourselves is just love. And that sounds so fucking corny, but if I don’t learn to let myself make mistakes and not beat myself over the head about it, then how do I expect someone to love me, or for me to extend love to someone else?”

Tomberlin’s thoughts on the subject are not the only valid viewpoint, something she explains she thought about a lot while writing this record. “I think great songs leave room for you to attach your own narrative and your own feeling, because once it’s out, it’s really not mine anymore,” she says, acknowledging that people will extract meanings and interpretations she never even thought about. This, too, comes from her lifelong habits, beginning when she was a teenager and printing lyrics of her favorite songs out to pore through. “I realized really early on why this is so powerful or why this brings up so much emotion in me listening to it, because I am attaching my own experience to this person’s story,” she recalls.

This level of contemplation isn’t possible without the time to do it. Before the pandemic, Tomberlin didn’t have much of that time. She was on tour for 11 months during 2019, followed by the recording of Projections in December, a stint in Los Angeles for the first three months of 2020, and was planning on hitting the road again before everything shut down. “It made me realize I actually really needed the time to process all that had happened in my life,” she says. She notes that the often unrelenting cycle artists can find themselves in with touring, writing, recording and promoting their work leaves them precious little time to themselves, and while she struggled with isolation and the emotional toll of the pandemic like many others, she is grateful to have had the space to reflect on her growth, which in turn allowed her to evolve on idkwntht.

Looking forward, Tomberlin hopes to bring more of the hopeful energy and collaboration that defines her new record to the rest of her experiences. She describes the process as “beautiful,” and explains it’s not only a collaboration with others, but also with herself, giving herself more space to ponder and explore without putting pressure on herself to be perfect or have all the answers. idkwntht has inspired her so much that she’s already writing again. She might not know the answers, but Tomberlin is simply happy to talk it all through: “I feel like I’m just inspired talking about the record. Like, I’m not exhausted by it, even though it is exhausting in a way. But at the same time I get excited about it, which is beautiful and cool. I’m very thankful.”

Gabriel Aikins is a Chicago-based freelance writer with a focus on pop music and movies. His work has appeared in i-D, MTV, FLOOD and Paste. He loves good pop songs, good root beer, and good dogs.