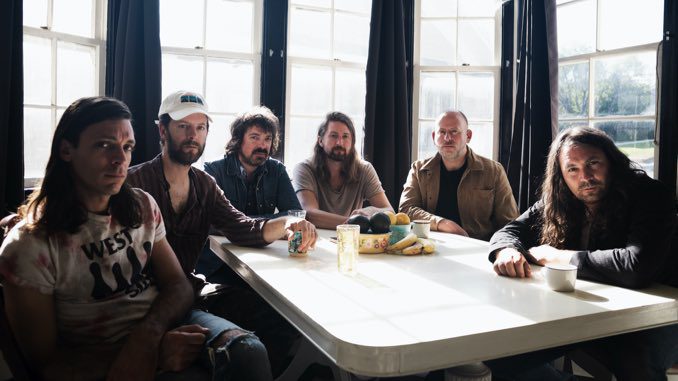 Adam Granduciel’s The War on Drugs are back with the second single and title track from their forthcoming fifth album I Don’t Live Here Anymore, coming Oct. 29 on Atlantic Records. “I Don’t Live Here Anymore” features backing vocals from indie-pop duo Lucius, who appear alongside The War on Drugs in the song’s accompanying video, which was directed by Emmett Malloy and shot in Los Angeles.

Co-produced by Granduciel and Shawn Everett, “I Don’t Live Here Anymore” is built on a catchy throwback keyboard figure and peppered with the War on Drugs bandleader’s elastic guitar notes. The song sprawls as Granduciel ponders his past and future, each uncertain: “When I think about the old days, babe / You’re always on my mind / I know it ain’t like I remember / I guess my memories run wild,” he sings, as if performing a postmortem on a once-cherished relationship; later, he wonders, “Is life just dying in slow motion / or gettin’ stronger every day?” It’s in the anthemic choruses that Granduciel finds his determination to live in the moment, taking heart in togetherness: “I’m gonna take it to the place I need to go / We’re all just walking through this darkness on our own,” he and Lucius sing in unison, their joined voices underscoring the idea in moving fashion.

The War on Drugs announced their new album and shared lead single “Living Proof” in mid-July, earning a spot on Paste’s list of that month’s best songs. They performed the track on The Late Show with Stephen Colbert last week. Even before it was formally announced, the band’s A Deeper Understanding follow-up was one of Paste’s most-anticipated 2021 albums, and their previews of I Don’t Live Here Anymore to this point have done nothing to curb our enthusiasm.

Granduciel and company have mapped out a 2022 tour of North America and Europe that spans the first four months of the year. You can revisit those dates right here.

Watch the “I Don’t Live Here Anymore” video and revisit The War on Drugs’ 2010 Daytrotter session below.