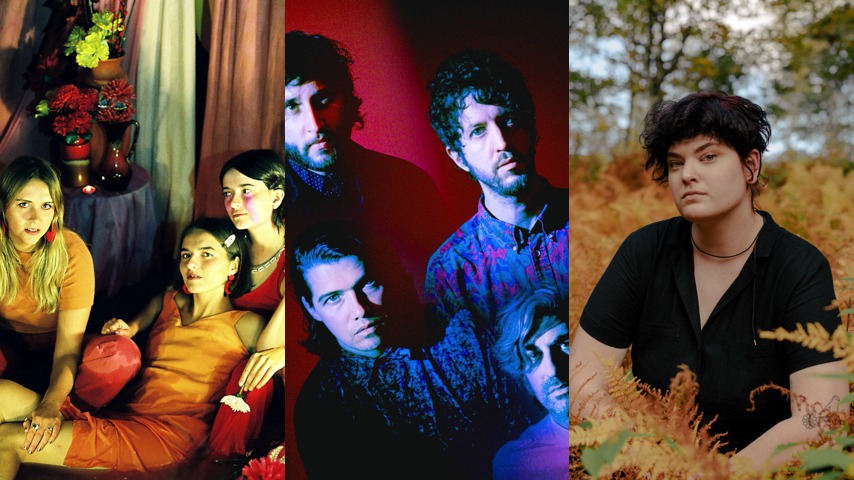 2021 is looking up, thanks in large part to this week’s inauguration of a U.S. president who is, if nothing else, a functioning adult. We’re also glad to see more and more artists gearing up to put out new material: Artists like Adult Mom and Small Black announced long-awaited albums this week, while Goat Girl and Nana Yamato shared new previews of their forthcoming Q1 releases. We dove into the week’s hearteningly deep pile of new singles and came up with a fistful of eight choice cuts. Take a half-hour out of your Friday and enjoy.

Stevie Knipe’s Adult Mom is back, unveiling their first new record since parting ways with now-defunct label Tiny Engines. Fittingly, “Sober” trains its focus on the aftermath of a broken relationship’s dissolution, with Knipe’s narrator moving on from someone they no longer love. Keys and a drum machine beat set the tone while Knipe assesses the situation with unflinching honesty and humor: “The only thing that I’ve done / This month is drink beer and / Masturbate, and ignore / Phone calls from you / What else am I supposed to do?” Propulsive pop-rock guitars push the song along until Knipe finally concludes, “Now I don’t even think of you / When I am sober.” Meanwhile, the “Sober” video—directed and animated by Maddie Brewer, with additional animation from Noah Gallagher—comprises quietly vivid images of someone putting painful memories (and booze) behind them, moving forward on a journey of self-discovery that slowly but surely turns into something quite surreal. —Scott Russell

If you came of age (or just kept getting older) loving the likes of Saves the Day, The Get Up Kids or even The All-American Rejects, you’ll feel right at home with Florida quartet Camp Trash, whose sticky pop-punk sound makes quite a first impression on Downtiming, out now via Count Your Lucky Stars. It took all of one single (excellent EP closer “Weird Carolina”) for the band to announce themselves as an emo-revival act worth keeping tabs on, assuming the mantle by way of warm, relentless hooky guitars and Bryan Gorman’s bright vocals, which evoke the same kind of small-town yearning (“Sitting out on your front porch in some Midwestern suburb / Cracks in the cement measure / No warmth ahead / Since you left”) that has long run through the subgenre’s veins. “Weird Carolina” gets bigger and better as it builds, name-dropping James Taylor and doubling down on its anthemic, eyes-on-the-horizon rock. —Scott Russell

U.K. quartet Goat Girl have delivered another new single/video ahead of their forthcoming sophomore album On All Fours (out Jan. 29 via Rough Trade Records), the unsettling climate change elegy “Badibaba.” The band’s new track is “about environmental catastrophe and the pessimism and self-destruction that this causes to the human spirit,” Goat Girl guitarist/vocalist L.E.D. explains. “Burn it / Use it up / Hang it from the setting sun,” she sings over garbled synths and muted guitars on “Badibaba,” bemoaning our collective tendency to use the world up like we’ve got another in our back pocket. The single’s eerie lyric video (dir. Toby and Ethan Evans-Jesra) overlays footage of nature with subtly macabre imagery, displaying a demonic, disembodied clay face during the song’s choruses—as if “Badibaba” is an evil spirit, the living, malevolent representation of our avarice. As the song crescendoes, nature disappears into the darkness, with Badibaba’s sinister grimace overtaking the screen. Illustrations flash and spin, overwhelming the video itself as Goat Girl’s instrumentation spirals, a cyclone of distorted guitars, whipsawing synths and cymbal crashes. “Badibaba” finally collapses under its own weight, as if having undergone a cataclysm from which there’s no recovering. —Scott Russell

London four-piece Honey Lung have shared a new single “Oh So Real,” out now via Big Scary Monsters. It’s the follow-up to their previous track “Room,” and it also follows last year’s EP Post Modern Motorcade Music. A version of “Oh So Real” originally appeared on a vinyl-only demos and singles collection, Memory, which was released by Kanine Records in 2019. “Oh So Real” has both the chunky grit and gentle-hearted nature of Silversun Pickups, with gnarly, rumbling guitars acting as a segue to their sentimental chorus. Their hook-driven guitar noodling is as sharp as ever, and they even delve into a steamy Black Sabbath-esque breakdown before returning to their heartwarming selves. —Lizzie Manno

Nana Yamato: “Do You Wanna”

Tokyo-based artist Nana Yamato (who’s previously released seven-inch singles under the name ANNA) has shared a new single “Do You Wanna,” from her forthcoming debut album Before Sunrise, out on Feb. 5 via Dull Tools, a label run by Parquet Courts’ Andrew Savage. The album was produced by P.E.’s Jonathan Schenke, and this new single follows her previous track “If.” “Do You Wanna” is imbued with a sense of sacred solitude. Alongside synth loops, programmed beats, electric guitar strums and trumpet noodling, this 20-year-old songwriter sounds intentional and fully in control. This wistful tune doesn’t tout the hallmarks of other bedroom artists—often yearning for connection outside the confines of their home and recycling Spotify algorithm-friendly sounds—she’s fully immersed in the fantasy of her own world and decorates it with sounds that suit her tastes (in this case, with the off-kilter electro-rock of EMA and dreamy indie rock of Say Sue Me). —Lizzie Manno

Chillwave groundbreakers Small Black are back, previewing Cheap Dreams—their forthcoming “Long Island gothic surf epic” and first new album since 2015, out April 9 via their new label 100% Electronica—with this week’s “Duplex.” The second Cheap Dreams single after October 2020’s “Tampa,” “Duplex” is hypnotic and evocative. Staccato piano stabs float to its surface through depths of dark, swirling synth, their lightness standing alone in a reflection of the lyrics’ isolated imagery. “We finished writing & recording ‘Duplex’ way before the world shut down last March, but the lyrics seemed oddly prophetic to me as we were doing the final mix,” says lead singer Josh Kolenik. “‘Walking in the house alone / Pray on the ottoman / Amen for one’ I was originally thinking about the absurdity of feeling alone amid the 9 million of us in NYC and yet suddenly, we were all isolated without much of a choice in the matter. In those weeks spent listening to the quiet out our Brooklyn windows, only broken by the occasional siren, unsure where the city or the world was headed, the song took on a new meaning.” —Scott Russell

Snacking: “Blacked Out on a Train”

An indie-rock quintet out of St. Petersburg, Fla., Snacking will release their new EP Painted Gold on Feb. 8 via Chillwavve Records. Lead single “Blacked Out on a Train” is a song of transition, taking liminal space—like the titular train car moving from a dark past to an uncertain future (“We’re leaving town alive / Without saying goodbye”), or the stylistic space between Minus the Bear-style math rock and emo revival—as its setting. Snacking show off effortlessly melodic guitars, forceful low end and emotionally complex lyricism, building “Blacked Out on a Train” up into an invigorating instrumental firestorm. “We chose ‘Blacked Out On A Train’ as the single because it’s a step in a different direction for us,” the band told BrooklynVegan upon the song’s premiere. “It’s more dissonant and hectic than anything we’ve written previously. We thought it would do a good job of attracting new listeners and hopefully surprise those who are already familiar with our prior material.” —Scott Russell

Danish rockers Yung arrived with their debut album, A Youthful Dream, in 2016, and it was filled with punk-laced guitar pop, simultaneously scruffy and sharp, and often life-affirming. Now back with their follow-up, Ongoing Dispute, they sound like they’ve been emotionally tested and are now out to prove something. Their new LP is, at times, tense, as they try to make sense of where they are and where they’re going, but its unexpectedly intricate riffs and fits of rip-roaring joy both cut through and complement that emotional tension. They’re most exuberant and captivating on “Unresolver,” a big-hearted track wrapped in stylish post-punk, jangly indie and explosive, warped garage rock. —Lizzie Manno