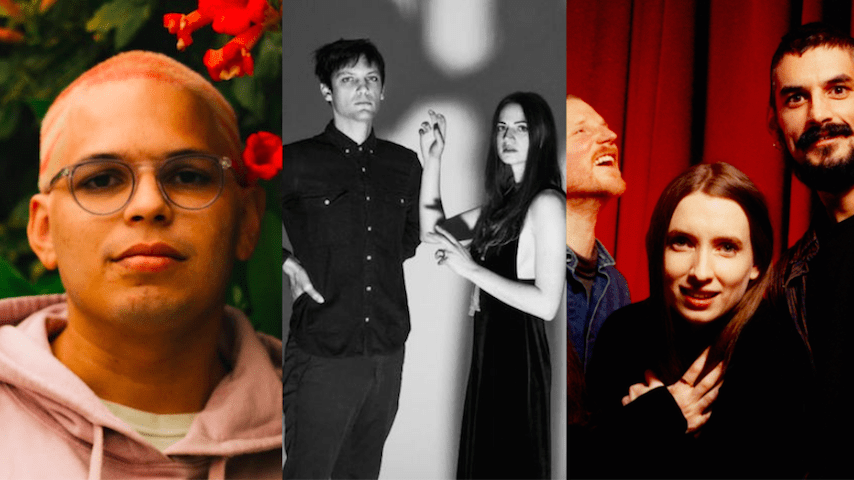 We’re back for another roundup of our current favorite songs. This week’s offerings run the gamut from spooky art-rock and math-y pop to dramatic post-punk and lo-fi dance-pop. Featuring Dry Cleaning, Francis of Delirium, Activity, Se So Neon and more, here are eight songs we can’t stop listening to right now, as curated by the Paste music team.

Activity recently shared “White Phosphorus,” a b-side from their debut album Unmask Whoever, which Paste named as one of the best rock albums of 2020. Much like their LP, the New York City band’s latest track has a pervading eeriness, complete with hushed vocals, a steady synth hum and elusive guitar lines—not to mention bleak lyrics like “decorate the walls with horse insides.” Its twisted drama is quite cinematic, and their instrumental sprawl is nothing if not absorbing. —Lizzie Manno

Cherry Glazerr shared their first new music of 2021 with a single titled “Big Bang.” It follows their previous track “Rabbit Hole,” and was inspired by lead singer Clementine Creevy’s time spent listening to DJ Koze, Caribou, Yaeji and Kaytranada. The bass-heavy, atmospheric track is marked by Creevy’s silky vocals and fits of endlessly catchy pop. “I wanted to give it a sort of early ‘aughts pop production feel, with the interplay between the acoustic guitar figure and the bass synth and the 808 hits during the choruses,” Creevy says. “The lyrics came from feeling like I was growing apart from someone who was close to me in my life, and the song is essentially about heartache, but it’s euphoric at the same time. That’s what I like about it — the intensity of those very personal feelings paired with a sort of huge, exposed energy. I feel like I was able to let a lot out with this song. It feels really special to me.” —Lizzie Manno

One of Paste’s most-anticipated 2021 releases is officially on its way with the announcement that Dry Cleaning will release their debut album New Long Leg on April 2 via 4AD. Dry Cleaning’s new song may be called “Strong Feelings,” but it sounds more as if Florence Shaw’s narrator is descending into numbness and apathy, murmuring at more than one point, “Too much to ask about / So don’t ask”—she’s inundated to the point of emptiness, just like on “Scratchcard Lanyard” (one of Paste’s top songs of 2020), on which Shaw urged, “Do everything and feel nothing.” —Scott Russell

Chicago band Floatie signed to Exploding in Sound and are releasing their debut album, Voyage Out, on March 26. They’ve also shared the album’s lead single “Catch a Good Worm.” Built on slippery rhythms, the track channels piquant indie-pop and sharp math rock, with lead singer Sam Bern challenging the notions of determinism. “You hear the words, but tell yourself / That we deserve, what we’re dealt / But something’s in the way of feeling great / Nothing’s going to swallow, sit and wait,” Bern sings softly with mystique, advocating for a broader view of possibilities. Simultaneously gentle and fickle, “Catch a Good Worm” is an alluring funhouse of sounds. —Lizzie Manno

Francis of Delirium: “Let It All Go”

Luxembourg-based indie duo Francis of Delirium announced a new EP titled Wading, out on April 2 via Dalliance Recordings. They also shared a new single “Let It All Go,” with an accompanying claymation-filled music video. “Let It All Go” unfurls with an energy on the brink of self-detonation. It’s a steamy, cathartic breakup song drawing on classic indie rock and emo, marked by Bahrich’s exasperated spoken vocals and climaxing with violently euphoric yelps of “Aren’t you tired of being alone?” Instead of shying away from the ugliness of relationships, it displays it shamelessly, while also lending self-forgiveness. Bahrich says the new single “feels like this vertigo, justifying and grappling and releasing.” —Lizzie Manno

Earlier this week, Harmless, aka Los Angeles-based singer/songwriter Nacho Cano, shared a new single “Nacho’s.” It’s part of a series of quarantine songs, and it follows his previous singles “Hannah Don’t Lurk,” “Sundae” and “Notice Me.” Last year, he released an EP titled Condiciones, which Paste named one of the best EPs of 2020. “Nacho’s” is anchored by a piano loop and cascading synth riff, with Cano’s glistening, relaxed vocals drawing the listener close and putting them at ease. “Dame amor / Porque el silencio / Me duele mas / Mi corazón,” Cano sings in the light, winsome chorus (which translates to “Give me love / Because silence / Hurts me more / My love”). It’s a bright, danceable synth-pop meditation on loneliness and the fear that rekindling a relationship won’t yield the same feelings as before. —Lizzie Manno

Minor Moon: “Under an Ocean of Holes”

On his newest song as Minor Moon, Chicago multi-instrumentalist Sam Cantor takes on a feeling that has become all-too-familiar over the past year: a nebulous sense of confusion and loss, most debilitating because of how difficult it is to even recognize, let alone put into words—or music, for that matter. Cantor manages that last bit admirably on “Under an Ocean of Holes,” the second single from—and the creative key to, as he explains—his cosmic country project’s forthcoming third album Tethers, out March 26 on Ruination Record Co. and Whatever’s Clever. —Scott Russell

Following their 2020 album Nonadaptation, which Paste named as one of the best rock albums of 2020, South Korean outfit Se So Neon are back with new music. Their latest single “Jayu” has more of an electronic bent than their previous LP—at least at first—with its jarring vocal production and fried synths, but it slowly morphs into a towering, perky ballad—strings, piano and all. It’s hard to think of many indie bands as versatile as Se So Neon right now, especially considering the intensely emotive, stately vocals of So-Yoon Hwang. —Lizzie Manno