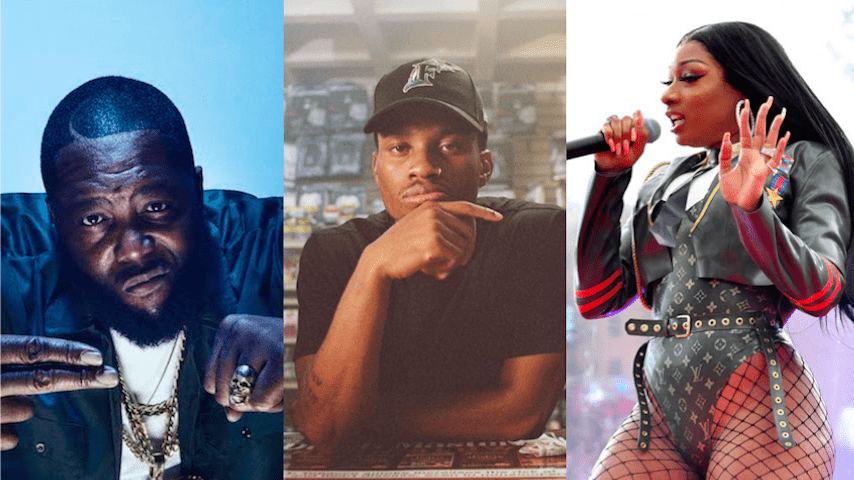 Rap and hip-hop have dominated the charts in recent years, and rappers have continued to make history in the past six months. Countless artists made striking impressions, and some reached milestones. Fans flocked to social media to ensure Beyonce, Megan Thee Stallion, Doja Cat and Nicki Minaj made history as the first four black female solo artists to occupy the top two spots on the Billboard Hot 100 with their respective hit singles, “Say So” and “Savage.”

We saw Drake’s mixtape, Dark Lane Demo Tapes, debut at number two behind Kenny Chesney’s Here and Now, which ended Drake’s streak of nine consecutive number one debuts. We were all so proud when Lil Uzi Vert dropped Eternal Atake—he’s come so far in his career (remember when he had braces?). Pop Smoke’s Meet the Woo 2 was an exciting taste of potential before the Brooklyn rapper was killed in February. Gunna fans waited for WUNNA to settle his rivalry with Lil Baby, but Lil Baby flipped the narrative when he dropped “The Bigger Picture” in response to the social unrest gripping the nation.

Rap and hip-hop have always been major platforms for rebellion against police brutality, and the recent outrage sparked by George Floyd’s killing cements what rappers have been talking about for decades. This year has seen many artists make statements, push boundaries and challenge the mainstream, even if that risks streams or album sales. Their blend of activism with innovation in lyricism and production is capable of far more than just entertainment—it can change hearts and minds. Without any further ado, here are our 10 favorite hip-hop albums of 2020 (so far).

Westside Gunn brings a deep-seated toughness to his rap that’s integral to New York. The Buffalo rapper drew his inspiration for Pray for Paris from the high art world—he’s been obsessed since Virgil Abloh used his music in his Off-White show—as he references classical art and iconography. He employs a classical flow with an asymmetrical cadence, making a conscious effort to transform fundamental rap techniques into the refined aesthetic he envisions. Features from Benny the Butcher, Conway the Machine, Joey Bada$$, Freddie Gibbs, Tyler, the Creator and others help the ascending rapper make his story one of opulence.

“Hot Girl Meg” returned with a highly-anticipated follow-up to her second EP Fever, after attention over her contentious contract with 1501 Records. Suga revitalizes the BDE that surged on her last extended play, but brings a composure that maintains her rapid growth over the past year. The Neptunes (Pharrell and Chad Hugo) cooked up some concentrated beats that amplify her wicked punchlines, usually about money or cheating, into an entire vibe. Meg’s flows ride comfortably on saucy instrumentals, and standouts include the constant sword unsheathing on “Captain Hook” and the complex melodies criss-crossing on “Rich.” Her cadence on these tracks renders her persona as the hoodrat femme fatale—the “Savage Remix” with Queen Bey made it official.

Smino surprised fans with a 4/20 album release in the midst of stay-at-home orders. She Already Decided, the follow-up to the backwoods classic Noir, is a mixtape full of zesty beats that fit perfectly alongside his St. Louis twang. Smino’s cadence is unreal at times—his range is impressive for a regional rapper (or any rapper.) The tape is balanced with an even distribution of hypebeast and head-bob joints and heartfelt slow grinds. Despite the extensive looks into the kind of promiscuity only rappers and rockstars can brag about, Smino explains that the statement “She Already Decided” doesn’t refer to a human woman, but rather, Mother Earth. His outro for “Already” explains the philosophy behind the intoxicated frat dream his life has become since making rap money. The creative subject matter in She Already Decided is perhaps flimsy amidst such powerful world events. Still, Smino never claimed to be anything but a success story from “St. Lou.”

Gibbs’ change in producers is immediately noticeable when a Bernie Mac precedes a sultry guitar riff in the album’s first track, “1985.” That’s not a jab at Madlib—his work on Bandana was spotless—but The Alchemist’s experimentation is especially stark here. Gibbs maintains his usual level-headedness and stoic disposition through his expressions as an analytical gangster. Features from Rick Ross, Benny The Butcher, Tyler, The Creator and Conway the Machine solidify the credibility Gibbs is back to confirm.

Deante’ Hitchcock’s BETTER presents a classic subject matter, and shows variability in a genre saturated with lyrics about struggle and violence. The album impressively floats between melodic and conscious trap, and you can tell Hitchcock is a more than seasoned artist. The first track reminisces about life before money and introduces a couple of hype numbers that give way to a Georgia boy discovering his love language. The second half of the album unearths a more human Deante’ who’s trying to remain himself despite growing fame. “Shadowman’s Interlude” and “Growing Up/Mother God” are choice representations of the innocence and curiosity Hitchcock holds close. Features from Young Nudy, 6lack, Miguel and St. Beauty strengthen Hitchcock’s first full-length since 2016.

Mac Miller’s sixth studio album, Circles, cements the legacy left by the young trailblazer. The posthumous album from the new school’s light-hearted kid builds on the tranquil acceptance established with Swimming. His production is evocative, and his lyrics are dreamy, but honest. Depression and heartbreak are common themes in Miller’s music, but the pain in Circles is more palpable than before. This album left in the wake of his tragic passing displays the wisdom Miller retrieved from the deepest holes of his mind. Tracks like “Hand Me Downs” and “That’s on Me” show the maturity of his self-talk, and he brims with an imagination and sincerity that will live on forever.

Some rappers opt for 20-track albums as per the “quantity over quality” law that dominates the current business, but an emcee like Royce Da 5’9” had clear intentions for each of the 22 on The Allegory. Proper sequencing and pacing keep the first half of the album stimulating and thought-provoking. Tracks like “Ice Cream-Interlude,” a minute-long snippet detailing the definition of “allegory” and the racist origins of a classic American jingle, seems to foreshadow the tension over American confederate symbolism on public property. “Mr. Grace” and “Ms. Grace” strengthen those cultural narratives, but there are some hiccups. The choppy flow on “Tricked,” particularly, is jarring for the album, but digestible on its own. Even so, Royce’s presence on the album is rock solid.

Denzel Curry and Kenny Beats’ experimental collaboration, Unlocked, is a maze of “accidental” successes. The tracks speak for themselves (even when the titles don’t.) Each title resembles a computer file, as if they were leaked without permission. The finished product is 17 minutes of a retro simulation formulated before stay-at-home orders. It may be less than 20 minutes, but Curry makes full use of every second. His usual rebellious anecdotes take an urgency that starts and stops on a dime as he flaunts his tricky flows over Kenny’s boombap concoctions.

A Written Testimony is a spiritual and philosophical account from Jay Electronica that illustrates a journey of freedom. The debut studio album from Nas’ alleged ghostwriter is littered with collaborations from Jay-Z. Two intense Louis Farrakhan samples are first, but the story begins when Hova grabs the mic. Electronica keeps pace with the legend, and the two volley throughout the album. Electronica maintains nostalgic appeal, using old samples and vintage beat constructions, as the album utilizes light and dark tones to express his worldview. “The Neverending Story” shines a spotlight on Electronica’s theatrical voice. Besides lyricism and production, Electronica executes his revolutionary concept with daring rhythms and consistent Islamic references. The Farrakhan samples, gangsta rap subject matter and political commentary make this account undeniably relevant and necessary.

Run the Jewels released their long-awaited follow-up to RTJ3 four days early in light of the killing of George Floyd. Killer Mike and El-P are as loud and boisterous as ever, determined to rewrite ideologies surrounding “wokeness” today. This rap duo maintains their old-school flow, but innovates with their complex lyricism and polished production to send a message: revolution. Killer Mike’s verse on “Goonies vs E.T.” is a thrilling diss track toward media influencers and their digital solidarity. This foreboding tone carries into “walking in the snow,” a colorized depiction of the dysphoria of minorities moving through a white supremacist country. Their lyrics (“Look at all these slave masters posin’ on yo dolla”) clarify the current criteria for change and activism, particularly for those who preach about progress, but support oppressors economically. Killer Mike and El-P embrace their role as aggressors as they deliver the cold splash no one was ready for.