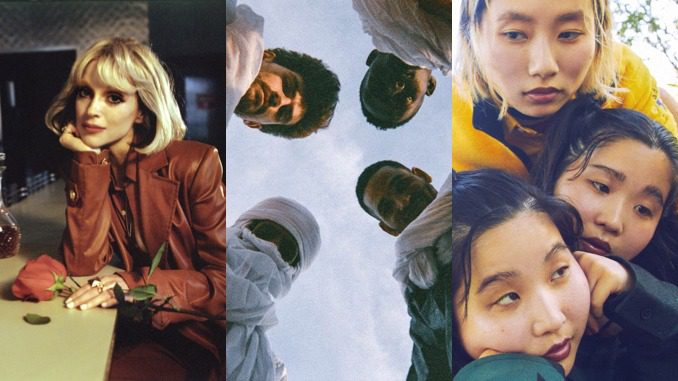 April was another excellent month of music, with albums and songs aplenty that we’ll be keeping in rotation throughout 2021. But with May’s first New Music Friday right around the corner, our focus now is on this month’s forthcoming releases, shining a light on the 10 we’re most excited to see hit record store shelves and streaming services. May itself didn’t make this easy on us—this month is stacked, from the ‘70s sleaze-style return of St. Vincent and Mdou Moctar’s new work of Tuareg guitar rock to much-anticipated debut albums by Bachelor and Squid, and the latest intergalactic transmission from black midi. Get hype on all the Paste Music team’s most-anticipated releases of May below.

McKinley Dixon: For My Mama and Anyone Who Look Like Her

“All moments, past, present, and future, always have existed, always will exist,” Kurt Vonnegut once wrote. “It is just an illusion we have here on Earth that one moment follows another one, like beads on a string, and that once a moment is gone it is gone forever.” Richmond, Virginia’s McKinley Dixon, too, rejects that illusion on his forthcoming third album (and Spacebomb debut), using jazzy, avant-garde art-rap as a means of processing his past and creating a better future. Emerging from the devastation of his best friend’s tragic death in 2018, Dixon examines Black struggles and the societal factors that exacerbate them, fending off self-doubt, regret and trauma as he fights to find catharsis For My Mama and Anyone Who Look Like Her. The result is a powerful, personal act of “musical time travel” that aims to ease the pain it catalogs by breaking down barriers of understanding, tracing a nonlinear path for others to follow. —Scott Russell

Dismiss this Brighton-born, London-based quintet as just another Speedy Wunderground guitar-rock act at your own peril. Louis Borlase, Ollie Judge, Arthur Leadbetter, Laurie Nankivell and Anton Pearson make sprawling, motorik post-punk tracks, operating in flawless sync like a ferocious five-headed organism. Singer and drummer Judge’s freak-rock vocals stand out, as do Squid’s lyrics, which create a surreal funhouse mirror (“There are people, there are people inside / And they’re changing, in shape and in size,” they sing on standout “Paddling”) so as to reflect our warped reality back at us. Squid’s debut album is ambitious and thoroughly unnerving, yet you can’t help being swept away by it, like on lead single “Narrator,” which finds Judge losing his grip on what’s real and imagined over nervy new wave—it’s thrilling and terrifying when he abandons the distinction entirely, repeating “I’ll play my part” over and over as the track catches fire. Bright Green Field is a rollercoaster of a record, carefully engineered for maximum dynamism, a punchy symphony of tension and release. —Scott Russell

How do you make a deconstruction album when you’ve legit been deconstructing your persona album by album your entire career? Annie Clark says that her sixth St. Vincent album “collects stories of being down and out in downtown NYC. Last night’s heels on the morning train. Glamour that’s been up for three days straight.” In the lead-up to Daddy’s Home, Clark was worshipping at the church of Sly Stone and Stevie Wonder, and it’s obvious on the painstakingly funky “Pay Your Way In Pain” and the hangover-soaked “The Melting of the Sun.” Clark is the rare artist who can immerse themself in a different concept and aesthetic every couple years, tackle it head-on and totally shred in the process (just ask David Byrne … or Jack Antonoff; the latter co-produced Daddy’s Home). St. Vincent has gotten to the point where we can’t look away, because there’s just nobody in indie pop quite like Annie Clark. —Adrian Spinelli

CHAI has always been a band to subvert expectations, turning the reduction and fetishization of their Asian identity into deceptively cute songs that open up endlessly nuanced discussions of cultural norms and femininity. Their forthcoming album WINK follows up 2019’s PUNK, expanding on their erratic punk and dance influences, and morphing them into whispery R&B-flavored thumpers like “Nobody Knows We Are Fun” and house-inspired tracks such as “ACTION.” This album sounds more like a grab bag of sounds compared to their older work, and it works as they add their whimsical twists to make music that is both provocative and fun. —Jade Gomez

Claire George: The Land Beyond The Light

Claire George’s debut has been a long time coming since 2018’s Bodies of Water EP. Her much-anticipated first full-length The Land Beyond The Light shows a freer side of George, with feel-good dance anthems bathed in neon lights. Her delicate vocals slip over ‘80s synths and atmospheric hums on singles such as “Pink Elephants” and “I Promise,” thawing out a cold exterior to reveal something more human. George’s expressive lyricism finds her opening up about deeper issues of addiction and unconditional love, showing there are glimpses of gardens in even the most barren of lands. —Jade Gomez

Tuareg guitarist and songwriter extraordinaire Mdou Moctar and his band are making their Matador debut with Afrique Victime, a resolute protest against the ongoing large-scale exploitation of their continent. “Africa is a victim of so many crimes / If we stay silent it will be the end of us,” Moctar sings out on the LP’s towering title track, loosing scorched-earth Saharan rock riffs over a shuffling groove that speeds and slows, but adamantly marches on regardless of its pace. Moctar’s Van Halen-inspired electric shred is one element among many on Afrique Victime, sharing space with acoustic folk-rock (“Tala Tannam,” “Layla”), drum machines (“Ya Habibti”), atmospheric group vocals (“Asdikte Akal”) and field recordings captured in his native Niger (“Chismiten,” “Untitled”). Mdou Moctar’s music once spread across Western Africa via cell phone data cards; now, Matador is releasing an Afrique Victime collector’s edition that’s preloaded onto (and mastered for) an old-school Nokia 6120. You’d be hard-pressed to find a better metaphor for the journey Mdou Moctar’s talents have taken them on. —Scott Russell

Back in February, Jay Som’s Melina Duterte and Palehound’s Ellen Kempner announced their new project Bachelor. The indie-rock treasures have come together in perfect harmony to create expansive sonic universes out of the minutiae of daily life, such as their debut single “Stay in the Car,” inspired by Kempner seeing a beautiful stranger in a parking lot. It’s perfectly imperfect as the harmonies shift in and out of tune and the plucky guitars shift to the forefront, an homage to their DIY roots that began in bedrooms and garages. Doomin’ Sun is a diary put to music, pinpointing specific instances of desire, insecurity and love in ways only Duterte and Kempner can express. —Jade Gomez

black midi’s experimentation knows no bounds. Their latest single “Slow (Loud),” off their forthcoming sophomore album Cavalcade, continues to push their limits (not that they have any) with horns and jarring time signature changes. There is no right way to articulate black midi’s style, which forgoes all fundamental expectations of music, instead making their lack of structure an expectation. Each song is an experience, unable to be expressed through adjectives and comparisons, except for maybe the occasional Mars Volta parallel. Nonetheless, Cavalcade is an exciting opportunity to see what chaos they orchestrate. —Jade Gomez

Let’s face it, a lot of electro-pop these days has become a saccharine attempt to reproduce the successful sounds that came first. So when an electro act is able to poke through the clutter and truly capture our attention, it’s exciting. Enter Bristol’s Elder Island, who are seemingly darlings of Spotify radio’s algorithm and, truth be told, came onto my radar years ago in that fashion when I surrendered to their gospel and took credit for a small chunk of their 200 million global streams. Their debut LP Omnitone Collection features one sticky and uplifting banger after another (hellooo, “Kape Fear”!) And now with Swimming Static on deck at the end of this month, it’s time to dive back into Katy Sargent’s decisive vocals with neo-soul inflections alongside synths and strings that make you move. “Small Plastic Heart” especially delivers the dance floor nostalgia we’re all pining for right now and it’s a total head-scratcher how a label like Future Classic isn’t all over this band. —Adrian Spinelli