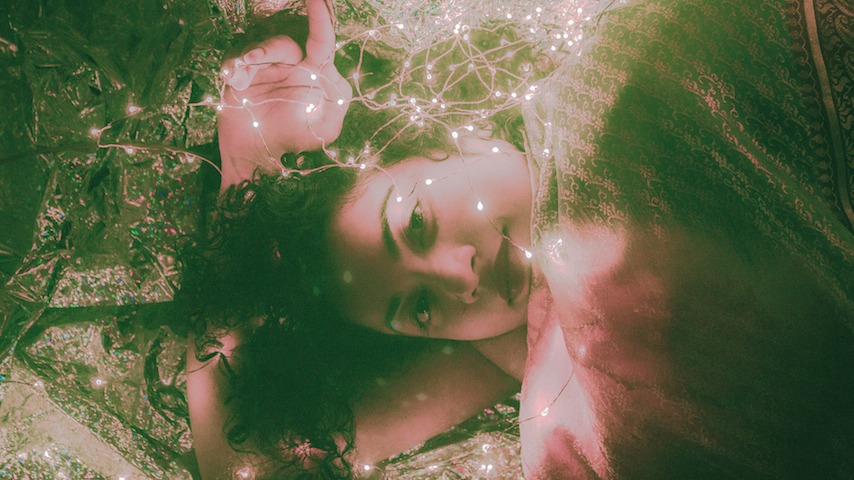 Crickets are chirping, and violin strings are plucked ever so gently—the plucks are tiny and full of wonder, as if miniscule creatures are slowly exploring new terrain. Bustling saxophone, synths and percussion are at war with each other, and you can picture the same chaotic cloud of dust that appears when retro cartoon characters are throwing fists. Caressing vocals ring out with a strange filter that sounds like someone’s singing into an electric fan. Keyboards become increasingly ominous until pretty choir vocals emerge, so it’s unclear whether you’re at the gates of heaven or hell. These are just a few snapshots from Thanya Iyer’s generously detailed album KIND.

Thanya Iyer is a Montreal-based band led by the vocalist, keyboardist and violinist of the same name and joined by bassist Alex Kasirer-Smibert (aka Pompey) and drummer Daniel Gélinas. They self-released their debut album Do You Dream? back in 2016, followed by a mixtape in 2018. KIND, on the other hand, is a totally different beast. It was released earlier this summer to critical acclaim via Topshelf Records and was both meticulously devised and skillfully improvised. It’s one of the most astonishing albums you’ll hear this year, fusing indie-folk with jazz, experimental pop and classical music to stunning effect.

Iyer was born to Indian parents and grew up in Montreal. Her mother and father loved to sing, and they frequently organized concerts that brought Indian musicians to Montreal. Iyer spent her childhood at these events with her friends and eventually took lessons in Indian music and dance. She didn’t see herself as prodigiously talented, never thinking very highly of her voice and also finding herself stuck between the worlds of classical violin and Indian violin, but she persevered with music anyways, recognizing a passion that had to be explored. She later received a degree in music and psychology at Montreal’s Vanier College, where she started writing songs, developing her sound and met many of her current collaborators. Psychology was just something to keep her options open, but that degree makes total sense after you listen to KIND, an album rooted in self-inquiry and based on her journey of self-love.

“I love writing about things in my mind, the self, mindfulness and that inner healing that needs to happen,” Iyer says. “I was booking tours in or in between classes and always drawn to music, but never feeling like, ‘Oh, I should just do this thing.’”

After a period of hesitation, Iyer finally decided to commit to music, and you can’t hear any of that doubt in her songs. KIND is far and away her pièce de résistance, but even 2016’s Do You Dream? feels like you’re sitting at the feet of a compassionate artisan, in awe of their craft. When making music, the band have used processes they call “collaging” and “saugmentation” (experimentation and augmentation), which give their songs both an offbeat and textured feel. These qualities are a big part of KIND’s magic. While Do You Dream? was less thought out and contained audio from rehearsals and field recordings, KIND is the band’s first piece that came with a fully-formed thematic vision.

KIND advocates for an empathetic view of oneself, one that doesn’t wane when things get difficult and instead rushes to soften the blow. It also describes a lush ecosystem, complicated and fraught but also mind-blowingly beautiful when operating at its full potential. In a world marked by bitter divides of all sorts, Iyer sees potential at the interpersonal level by focusing on humanity’s core elements: forgiveness, trust, respect, understanding, community, learning and dreaming. She paints these themes with simple language, but uses cryptic metaphors about the natural world, leaving interpretations open to listeners who hopefully feel a similar desire to imagine and fully realize a better way to live. For most people, getting there requires healing, a topic Iyer views far more broadly than its usual definition. For example, Iyer is interested in how healing relates to identity, a topic she explores in the song “Alien.”

“[Identity] has such a bigger impact than we realize on our interactions,” Iyer says. “It’s healing to acknowledge that and it’s healing to just say, ‘Oh, this is where I stand,’ and acknowledge someone else and what they’ve been through. Maybe one day, we will move to a space where it’s been acknowledged and people can live and be happy, but right now it’s really important.”

Another highlight is “Please Don’t Hold Me Hostage For Who I Am, For Who I Was,” which creatively marries the album’s central ideas. It’s about making peace with the past, courage to jump into the great unknown and resilience to endure the changing tides. The music itself is imbued with a similar sense of fortitude and possibility—time signatures zig and zag and Iyer’s balmy voice radiates while synths, horns and percussion exude distinctly restorative qualities. Like nearly all their songs, there are so many enchanting foreground and background sounds that enter and exit the frame, which makes every listen of KIND feel unique.

“I tend to go on the heavy side and then pair down after,” Iyer says of her layered composing style. “Any idea that I hear, I don’t want to limit myself in expressing those while recording. It’s kind of like when you go into a thrift store or something and you’re just like, ‘Get everything that you might like and then decide later.’ That’s kind of how the album process went.”

While Iyer compares her process to thrift shopping, she describes the whole band’s process as a “free-for-all,” and for KIND, that meant no material was thrown away and instinct and improvisation were the name of the game.

“A lot of the songs on KIND are one verse that I just brought to the group and we play it, we jam it out, we take it on tour, we play it differently every single night,” Iyer explains. “And then it settles into this home and this space that we all mutually love and will always gravitate to that form. That’s how it usually goes.”

It’s the same kind of collectivism that’s described in the lyrics of KIND. This album was a labor of love as it took a year to record, including performances from over a dozen accomplished guest musicians, vocalists and “beautiful friends.” Among them are saxophonist Devin Brahja Waldman (Godspeed! You Black Emperor, Patti Smith, Malcolm Mooney), vocalist and harpist Emilie Kahn (Iyer played in a band called TEA alongside Kahn and Ada Lea) and Brigitte Naggar (aka Common Holly). The process took place in various churches, apartments and venues across Montreal, and both the intimacy and grandiosity of those spaces can be heard on KIND.

KIND contains 42 minutes of meticulous, earthy jazz-folk, but if you’re looking for a condensed version that stimulates other senses while preserving the band’s staggering artistic vision, you need to watch KIND, the 20-minute visual album with slightly different arrangements and production. It was written, directed and edited by Bucky Illingworth and captures the band’s love of collaging in an even more visceral way. It shifts between shots of the natural and supernatural and the styled and unstyled, containing many of the signifying characteristics of KIND: challenging, touching, sinister and inspiring.

The record’s message of benevolence even coincides with its most terrifying component: the long-haired, slow-lurking, cloaked monster from the visual album who also appears in less overt forms on the full-length. “The creature was a representation of me and things that I really didn’t want to face,” Iyer says. By the end of the video, Iyer ends up hugging this harrowing creature—the same challenge Iyer presents to anyone who listens to KIND. Perhaps that’s the most beautiful and tragic part of KIND: realizing that the key to personal fulfillment and a better world is buried deep inside ourselves.

KIND is out now via Topshelf Records. Purchase the album here.