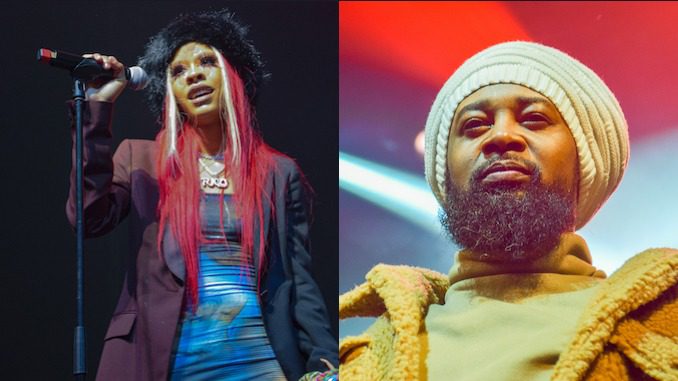 On a suspiciously warm December night in Chicago, Detroit’s own Danny Brown and DMV-bred Rico Nasty went head-to-head for Red Bull Music’s revitalized SoundClash series, which takes two artists with different styles and challenges them. The exciting event found its home for the night in the Windy City’s massive new venue, Radius, outfitted with two stages facing each other. Prior to the history-making showdown, Paste got to sit down with both of the rappers to get their takes on what it’s like to play such an unconventional show in a historic city.

Paste: You obviously love experimenting with your image and music. Did you see the SoundClash as a challenge?

Rico Nasty: It was a little bit challenging for me, because obviously I only perform my own songs. When we were talking about the covers round and what songs we like, that was really fun. I never got to do that before! Same with finishing somebody else’s song.

Paste: What went into that decision making?

Nasty: Well, because it’s in Chicago, I said I was going to do my Chicago favorites. For the other round where we have to finish each others’ songs, when I first heard that song by Danny, I always loved the beat. This was my opportunity to be on that beat! I think that’s what SoundClash is all about, you know, showing your shit on another artists’ beat and what they like.

Paste: What is the biggest thing you’ve learned about yourself through this process?

Paste: So Chicago aside, you are so tied to your DMV lineage. Do you think the region has been overlooked?

Nasty: Yeah, the DMV has always been overlooked. But thanks to me and a couple of others, I feel like there’s a lot of eyes on us right now. I said something about female rap a few years ago where I was the only female artist coming out of the DMV at the time and now there’s a new artist coming out every day. Every time I come home, they’re showing me new music and putting me on.

It’s fire that through this generation on the internet, people are able to go from being a small town, using the resources they have and shooting videos, and their whole life changes! I think that’s really cool. I love the DMV, and I miss it. I can’t wait for my next show out there. Obviously it’s known for go-go music and shit like that, but I feel like there’s a new sound emerging that people should pay attention to.

Paste: Was there that pressure being the only woman putting on for your city?

Nasty: Yeah, but I was having fun while doing it. My city never put pressure on me to be anybody but myself, and that’s one thing I will always be thankful for. When I was coming out, I didn’t have to pretend to be somebody I wasn’t. They always embraced me for that. I love my city and I miss Maryland.

Paste: As a longtime fan, I can see how much you’ve evolved and changed.

Nasty: I love that! So many people have told me that my music has helped them find their best friend, or they left my show and met people they became friends with forever. I remember we were in Toronto, and we were all upstairs in my dressing room. If you got meet and greet, you’d just be up there with me. We were up there and they all just felt like family, and they told me they didn’t know each other from anywhere. I thought that was crazy!

Paste: What I also find crazy is how much you love Guitar Hero, because I was also obsessed.

Nasty: Midori is a big fashion inspo, especially with the hair and the highlights. I just remember Guitar Hero was a really crazy phase in my life, because I was up late every night playing that fucking game. I never got to play on the guitar and be good at that, I was only good on the controller. I was pretty fucking good.

Paste: Before we go, you’ve said before that you don’t know where you fit in the industry. Did Nightmare Vacation change that?

Nasty: I don’t think I’ll ever know where I fit! It’s something I’ve had to learn to embrace, because who wants to be like everybody else? It does get lonely, but I feel like it’s worth it in the end when you get to say that. The people who fuck with you, like really fuck with you, will stick with you forever.

Paste: So how did you approach this? You seem very confident.

Danny Brown: My manager and DJ helped me a lot with my decisions. For my approach, I just got my stage rust off. Lots of rehearsing. I’m ready!

Paste: You have some idea of what a SoundClash is, which gives you an advantage.

Brown: I did this with A$AP Rocky in London. I was his special guest, so I’ve seen it. I’ve also watched a lot of them.

Paste: I think people will probably assume it will be much harder to go about the rounds as a hip-hop artist.

Brown: I think hip-hop is too competitive anyways, so it gets a lot of drama involved. A battle of the bands would go over much easier, I think. However, me and Rico are cool, so it’s straight. The A$AP thing, on the other hand, was a little intense. They was up against four people, actually! It was crazy. Four stages in an arena. It was double what this is.

Paste: So Chicago and Detroit are often seen as sister cities. What is your relationship with the city?

Brown: The first thing about Chicago that really stood out to me was The Cool Kids! When they first came out, that was a whole moment. I remember coming out here, going to Wicker Park, going to thrift stores and shit, and house parties. The Cool Kids started it for me. I started going around that time. They’d book acts here, and I’d make like $500. It was tight.

Paste: What about dance music? Detroit and Chicago share that lineage, as well.

Brown: Yes! The Electrifying Mojo played dance music in Detroit, but he played a bit of everything. He played all the cool shit, but definitely a lot of house and ghettotech. They also had a radio block in the afternoon where they’d play ghettotech. One thing you should know about Detroit is they speed everything up. You go to a nightclub and all the songs are at least 140 BPM. A Beyonce song could be a ballad, but it would be fast as fuck with people jitting. I think that’s something cool about us that doesn’t get acknowledged a lot.

Paste: Did you dabble in dancing?

Brown: Hell yeah I used to jit back in the day. That was a big deal. You ain’t know how to jit? You won’t get no girls. We used to be in basements teaching each other moves. It was a big thing, like the Black version of skateboarding. They’d hurt themselves trying to do moves and shit.

Paste: You gonna break out the moves for Chicago?

Brown: You’ll see. I got some other crazy shit, too.