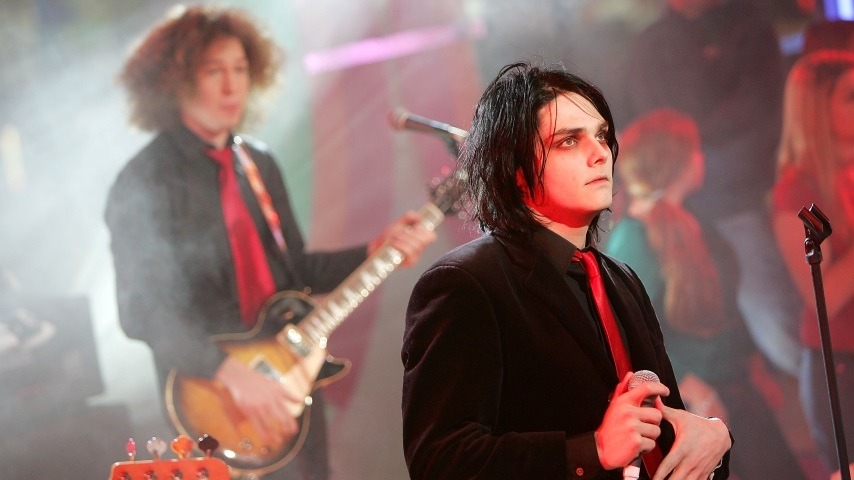 Last week, I randomly booted up Saints Row 2 for the hell of it. While nothing good could presumably come out of playing a 13-year-old game that has aged so incredibly poorly, I did manage to enjoy my time with it for one particular reason.

In Saints Row 2, there is a radio station called Generation X, operated by a…white Rastafarian burnout named Veteran Child, who I just discovered is voiced by Neil Patrick Harris. So yes, just all around yikes, but bear with me for just a second. Veteran Child may have been a mistake but his taste in music kind of slapped.

Generation X was home to a lot of early 2000s punk, emo and alternative music, which would end up not just defining my tastes but awakening me to music in general. At about the same time that 11-year-old me was playing this on my cousin’s PS3, they also had Rock Band, so I was just absolutely inundated with the stuff. I’ve never heard so much Jet as when I flitted back and forth between these games for weekends on end.

My favorite song that’d come on was one I didn’t even know was from one of my favorite bands growing up. I absolutely lost it every time My Chemical Romance’s “Teenagers” would play. This was back before I knew that most people find it annoying when others just belt out every word to every song they hear, especially if they’re butchering it, as I likely was. Adorably, it was also before I cursed regularly, so I’d censor myself so as to not get whooped by my aunt. Ah, to be a baby again.

The setlist on the radio station was packed with bangers that’ve stuck with me long after I stopped playing Saints Row 2, though I guess even now I haven’t really put the game behind me. Taking Back Sunday’s “MakeDamnSure” is so stuck in my head, I learned it on guitar this past summer amidst pandemic boredom and isolation. My impression of it isn’t particularly good, but it’s kind of there from some angle I haven’t found yet. The song Paramore won’t perform anymore, “Misery Business,” is on there too, as well as Panic! At the Disco’s ridiculously titled “Lying is the Most Fun a Girl Can Have Without Taking Her Clothes Off.” Songs that I literally wouldn’t hear for another decade at least, like Minus the Bear’s “Knights,” made the cut. Red Jumpsuit Apparatus’s breakout song and only real hit, “Face Down,” is on the radio station, in case you doubted how quintessentially emo and 2008 this game is.

It should be noted at some point that for the uninitiated, Saints Row 2 is not about this music at all. It’s a game about gangs and the hood, plain and simple. It’s not this great facsimile of either of those, but it was undoubtedly concerned with them. Generation X is just one of the stations you can listen to on your way to where you eventually wreak havoc. But I don’t think I can really broach the topic of this music, primarily fronted by white people, without really unpacking that part of the appeal behind the station and the music was that it had any proximity at all to minorities. I’d had years of conditioning to that point that reinforced that alternative music, rock, punk, emo and anything derivative of them were the property of white people and could never belong to little brown boys like me.

At the time, I lived in the hood and I always kind of have (even if gentrification is trying to make sure I don’t) and it does have particular musical inclinations that are hard to get around. The stuff that came in my windows from outside when I was a child were acts like G-Unit or Tego Calderon. But now I wonder now how much of that was other people who’d grown up like me, not knowing that their taste could be more diverse than their surroundings led them to believe. So you can then imagine how particularly shocking it was for me to find that music like MCR or Deftones had a place in what was, for better and for worse, a representation of the hood in Saints Row 2 and maybe even my life. Because at least in my real life, that never really felt true.

Until my Saints Row 2 revelation, I was musically agnostic. I didn’t bow at the altar of any artist or genre. The music I knew was what everyone around me liked. I had no control over the radio in my house, for example. My mom did, and the house reflected that. Bachata and salsa played while she cooked or cleaned. When she wasn’t home, my older brother blared music on our computer and from there I learned about hip-hop, R&B and reggaeton. On Sundays, I went to church and sang every hymn in the book, and belted them, too. I wanted to sing and I loved music, but I was young and had no idea what it was that I wanted to throw my voice behind. And it wasn’t like what I’d been exposed to was bad; a lot of those genres are loves of mine. They just didn’t feel like they were mine, even if according to everyone else, they were.

The one domain in my house nobody ever messed with me over was the TV. On the weekends, though, I’d relent and since my older brother was home more often, we’d share the TV. It was almost always fixed on MTV on Saturday afternoons, where many of the bands I’ve already listed thrived during my childhood. I remember seeing the video for “Nine in the Afternoon” by Panic! and being in awe at the instrumentation and theatricality on display. That wasn’t common in the music tastes found in my household or surroundings. Here was a song, band and genre that spoke to this closeted weirdo inside me who’d never been allowed out. I still don’t really get why it spoke to me beyond the fact that it felt impossible to be into until it wasn’t. Maybe that’s all it has to be to give my listening purpose.

In this scene and in this dumb game, I found a little piece of myself or who I’d become at least. It was wonderful, save for the fact I had no way to capture it. I had no iPod, no MP3 player, and my cousin really didn’t want to let go of his Zune. MTV remained a staple of my weekends, but I wouldn’t really connect with the scene in a tangible way I had control over for a long time. It wouldn’t be until about 2008 when, you guessed it, Saints Row 2 came out that I did. There I was, 11 years old with a brown avatar nodding along to what I’d long thought was “white people music.” It felt good taking that for myself.

Generation X became the closest thing I had to a music player of my own until I got my first iPod the following year, and you can probably guess what some of the first songs I put on it were. They’ve actually never come off the list of songs I carry around with me. From that iPod to the next and eventually my phones and the streaming services on them, that era and those particular songs have always been with me in some shape or another.

Generation X in Saints Row 2 is where that all started, and it’s one of the best screenshots of a music scene at something resembling its prime I’ve ever seen. While the genres it championed may have faded in popularity since then, some of the acts included on this setlist are now some of the biggest around and it’s good fun tracing them and my taste back to their respective roots. These were likely the first songs I’d headbang to and I think that’s beautiful. More than anything, I’m grateful to have tuned my in-game radio to Generation X and shattered the preconceived notion that I had to stay in any musical lane. So here’s to Saints Row 2, a horribly blemished and lousy game whose taste in music is probably its sole redemption. Here’s to finding ourselves in the unlikeliest places.

Moises Taveras is an intern for Paste Magazine and the managing editor of his college newspaper, the Brooklyn College Vanguard. He was that one kid who was really excited about Google+ and is still sad about how that turned out.