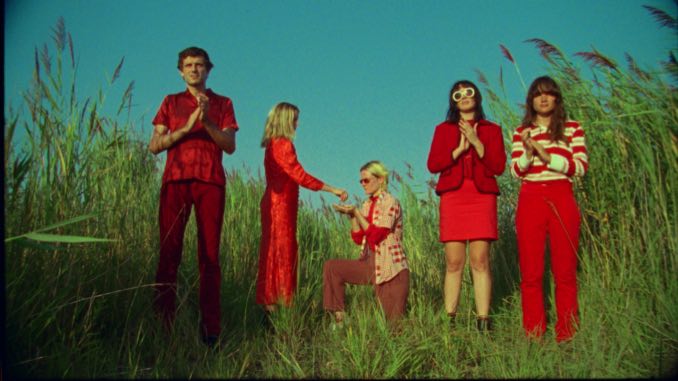 Back with one last single ahead of their debut album Audio Drag for Ego Slobs (Oct. 1, Royal Mountain Records), Brooklyn art-punk quintet Gustaf released “The Motions” today (Sept. 8) alongside a music video.

Gammill breaks down the band’s new track—and the mind-body connection it turns on—in an extensive statement:

I always envisioned “The Motions” as our “walking around New York City” song. The cadence is great for trudging across a bridge or taking the subway.

The song is about snapping between the perspective of your chaotic inner narrative while following the precut path of the world around you. Like when you’re strutting down the sidewalk to a song and your headphones slip off for a second to reveal the natural soundscape you’d been ignoring, realizing the world you had been wrapped up in is not the one shared by everyone else. Then you see that everyone with headphones is jumping between their own personal world and the reality they’re actually living in. I’ve found that if you walk around New York City without headphones, the streets are surprisingly silent. It’s us that add the cacophony of our own personal soundtracks.

The song shuffles through these different perspectives. The hook (watch, breathe, think, see … ) mimics the grounding voice inside the narrator’s head going through their next steps while interiorly they’re barely keeping it together. The first (and only) verse is their inner monologue breaking through as they participate in the slog of getting from one place to another. They’re battling the imprint of another person, blaming them for getting in the way of their progress, their forward motions obstructed by the taunts and memory of someone else. Sort of like a hypothetical fight you have in the shower. Just as the inner mind derails into chaos, the second refrain snaps out to the 3rd person and we are back in the world’s choreography of the mundane. The performance of the habitual, human ants dancing along our track.

When you’re losing control of your inner narrative, the motions are the reminder you tell yourself to keep it together. Sometimes though you just can’t help it and get lost in the personal panic of the na-na-need feed of it all.

Gustaf will tour the U.S., U.K. and E.U. this fall, sharing stages with IDLES, Pillow Queens and Osees along the way. You can revisit those dates right here.

Watch the band’s “The Motions” video (dir. Araque Blanco) below.