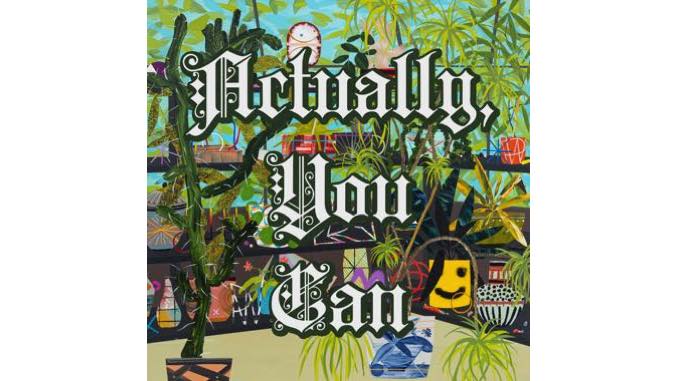 In the best possible scenario, music should find a way to bleed into your other senses. When the work of the long-running experimental rock band Deerhoof finally clicks, it can feel like you are being punked by your own brain. Throughout their tenure as a group, they have remained focused on the musical margins they could overcome by constantly moving forward at a prolific, steady pace. The group can be avant-garde, full of melody, anthemic, joyous and frightening, sometimes all within the same song. On their self-produced 18th album Actually, You Can, they further justify their attempts to be all of those things at once.

While the band has experimented a fair amount in the studio, researching and stumbling upon new tonal concoctions that mesmerized with close listens, as well as confounded with bombasting power at high volumes, this new record is an experiment in the band’s human chemistry as a dynamic, four-piece “live” unit. Deerhoof has seen members come and go throughout their long history, but the current lineup of original drummer and composer Greg Saunier, bassist and vocalist Satomi Matsuzaki, and guitarists John Dieterich and Ed Rodriguez bring a sort of egoless headbanger rock quality to their music that never points to easy, comforting conventions. Their intricate and sometimes abstract music is never delivered as pretentious, and when they lock in they can deliver the same fuck yeah gratification of both heavy metal and jazz done right.

This unique, Voltron-like mindmeld between each of their members and the agile quality to their live shows gained them a legendary status, with Pitchfork even once referring to Deerhoof as “the best band in the world.” In a recent press release for Actually, You Can—with interviews of all four members of the band conducted by Sadie Dupuis of Speedy Ortiz—Matsuzaki laid down some pretty simple rules for the band in order to help them regain the joy of simply playing in a room together, something that had been missing amidst the worldwide pandemic. “This album needs to be two guitars, bass, drums, period, that’s it,” she said. “I want to be able to play these songs.”

With two exceptional releases in 2020 alone with Future Teenage Cave Artists and the five-song live suite of covers by futurist artists like Sun Ra and Parliament Love-Lore, it might be hard to wrap your brain around the thought of Deerhoof trying to regain any sort of creative spark. But hearing the band’s bouncing groove on Actually, You Can opener “Be Unbarred, O Ye Gates of Hell,” you can quickly understand the sense of urgency she was referring to. The band sounds downright jubilant, with Saunier’s thunderous drums crashing through the mix while the rest of the band sound more than happy to devour the remaining space.

The song that follows—the album’s first single, “Department of Corrections”—doesn’t waver in its joyous stomp, with Dieterich and Rodriguez providing a wailing melody behind Matsuzaki’s lyrics casting doubt on the transfer of power in a political machine that benefits from maintaining the status quo. “This supper tastes just like the last one but it’s the first day of your term,” she sings. “Oh, jailer, who’s in charge around here? / And if not you, then is it I?”

Thematically, the album is in line with both of the band’s releases from last year, as Deerhoof have furthered their interests in investigating how to dissolve the made-up real estate created by late-stage capitalism and societal norms. In the same press release, the band offered this as the nine-track album’s central theme:

Think of all the beauty, positivity and love that gets deemed ugly, negative and hateful by the self-proclaimed guardians of “common sense.”We’d hardly be destroying society by dismantling their colonial economics and prisons and gender roles and aesthetics. We’d be creating it!

Aside from the album’s revolutionary call for awakening, another quality that instantly sets this album apart from Deerhoof’s recent flurry of releases are the immense guitar heroics from the duel attack of John Dietrich and Ed Rodriguez. On the exuberant “Scarcity Is Manufactured,” Dietrich and Rodriguez create a dense wall of dizzying arpeggios that mimic the swells of a harmonious string quartet. In the middle section of “Ancient Mysteries, Described,” the two are able to create dreamlike, pastoral moments, while one track later, they go into full-blown nightmarish freakouts, sounding at times like Glenn Branca mimicking the combative free-jazz horns of the Sun Ra Arkestra before nestling back into the groove.

While referencing guitarists working in sync like this, we are generally inclined to reference groups like Television, or the joyous guitarmonies of Scott Gorham and Gary Moore during the golden period of Thin Lizzy. But the fretwork Dietrich and Rodriguez achieve throughout Actually, You Can builds tension like intricately placed skyscrapers of junkyard cars, and demolishes them under the brute force of monster truck wheels. There is a playful, tactician-like quality to their guitar parts that can’t help but point to a shared spontaneous musical connection during the album’s recording. Mixed with Saunier’s juggernaut beat conductor presence behind the drum kit, and Matsuzaki’s anchoring bass and playful vocals, Deerhoof sound resilient in the face of the danger waiting for them outside the walls of the studio.

On the album’s latter half, Deerhoof get as far out as they can go on the downright evil-sounding “Our Philosophy Is Fiction.” With its slow, creaking pace and minor-key washes of delayed guitars evoking the terror of an MGM horror film, it’s a welcome detour into the macabre that helps to break up the album’s overall sunny disposition.

Before things get too dour, they launch into the slinky “Epic Love Poem,” which describes the love a fisherman has for the catch, as well as the respect they have for a fish to be able to breathe underwater. It’s simple message can seem unimportant at first. But much like the majority of Deerhoof’s lyrics, the song latches on like a children’s fable, rife with meaning. Actually, You Can closes with the shifting “Divine Comedy,” which finds the band cramming multiple movements into its five minutes, with an electrifying last three instrumental minutes delivering stunning performances from each member, and Saunier reaffirming his mantle as one of the most jaw-dropping drummers in all of music.

Deerhoof are a band who understand what they could have lost over the last two years. We can’t fool ourselves into thinking that we need to fill practice spaces in order to fill the world with music. But with Actually, You Can, these four individuals have created a celebration of human possibilities and one of their best records to date. Can we regain the magic? Actually, we can.