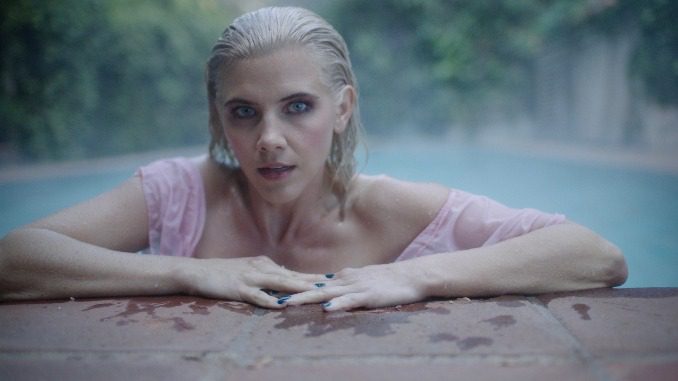 Claire George, a master of melancholic electro-pop, released
Northern Lights,” Wednesday. The song is the final single ahead of her debut album The Land Beyond The Light, one of Paste’s most-anticipated releases of the month, coming May 21 via Cascine.

On an album inspired by the loss of an ex-boyfriend to substance abuse, George has been no stranger to putting some poignant lyrics behind her danceable electronic beats. But “Northern Lights” rips the heart out to an extent not seen from the artist before, with deeply personal and intimate words about the end of her loved one’s life. “Northern Lights” begins like a yearning love song as she reminisces, “We had the same dream at the same damn time, you loved that song, listened every night / I miss your oval azure eyes, and how they calmed me down when I’d start to cry.” As the song progresses, the monster of addiction creeps out as George recounts witnessing him become “so far gone, hardly recognized you,” and the aching sense of loss permeates the artist’s breathy vocals and gloomy synths.

George spoke more of the song and its accompanying music video, directed by Brian Charles Lehrer, in a statement:

I wrote “Northern Lights” about someone I loved and lost to opioid addiction. I wanted to eternalize the memories we shared before they became distant or distorted, as they do when you retell or revisit them. After they passed, they appeared regularly in my dreams. Waking up I would relive the loss and beg for an alternate reality.

The video came from one dream I had in which I was called up the floors of a house to an attic filled with light. The attic is where we store our memories, old photographs and cards we made for our mothers. To me this felt like a reminder to appreciate the memories, even as my grief is indelibly tied to them. In the video I wanted to give myself the chance to do what I cannot do in life: free myself of the grief. Wring it out and be left only with the light.

Watch the music video for “Northern Lights” below. You can preorder The Land Beyond The Light here.