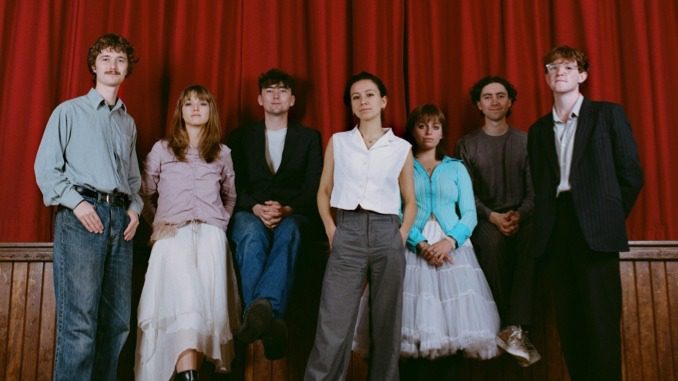 London septet Black Country, New Road are back with another preview of their forthcoming sophomore album Ants From Up There (Feb. 4, 2022, Ninja Tune), the heartbreaking “Bread Song.” The band’s For the first time follow-up will arrive nearly a year to the day after their Mercury Music Prize-nominated debut did, and if its first two singles are any indication, we’re in for something special.

Fans who have been following Black Country, New Road closely this year will already be familiar with “Bread Song”: They first revealed it in live form in February, performing the track in a Bandcamp Live improv stream, with frontman Isaac Wood later confirming the track’s title on Twitch. They would go on to play the song at the BBC 6 Music Festival, and at Queen Elizabeth Hall’s Southbank Centre—a recording of the latter livestream is included with the deluxe LP and CD versions of their new album. The track has already earned live-favorite status among the band’s dedicated fans, and now we can all see why.

The first thing you notice about “Bread Song” is that it uses percussion sparingly, spending its first half entirely devoid of it, and only introducing full-on drums in its final third, as opposed to the racing klezmer that bookended For the first time (on “Instrumental” and “Opus”). Wood explains the inspiration for this choice in a statement: “We wanted to do the first chorus with no time signature. I went to see Steve Reich do Music for 18 Musicians and there’s a piece where a bar length is determined by the breadth of the clarinet player, they just play until they run out of breath,” he recalls. “I wanted to try that with the whole band, where we don’t look at each other, we don’t make too many cues, we just try and play without time—but together.”

The intuitive unity between Wood (vocals/guitar), May Kershaw (keys), Charlie Wayne (drums), Luke Mark (guitar), Tyler Hyde (bass), Lewis Evans (sax) and Georgia Ellery (violin) is impressive, but it’s not what imbues “Bread Song” with such high drama. That’s Wood’s vocals, which are hushed and vulnerable as he delivers some of the band’s most quietly devastating lyrics yet, written and rewritten over a four-year period. “Okay, well I just woke up / And you already don’t care,” he sings, evoking the death by a thousand cuts that is two lovers drifting slowly, irrevocably apart. Technology comes up again and again, as if to point a finger at the source of the apathy eating away at this human connection Wood’s narrator holds so dear. The song tenderly changes shape around him, as if trying everything to turn things around, until he realizes his cause is lost, finally singing, “Oh, don’t eat your toast in my bed / Oh darling, I / I never felt the crumbs until you said this place / Is not for any man / Nor particles of bread.” Somehow, it’s this tiny, commonplace detail that hits the hardest.

“Bread Song” follows lead Ants From Up There single “Chaos Space Marine,” which we praised as one of that week’s best new tracks upon its mid-October release. Black Country, New Road recorded their new album at Chale Abbey Studios on the Isle of Wight over the summer, working with their longtime live engineer Sergio Maschetzko.

Black Country, New Road are heading out on their first-ever headlining tour of North America in February and March 2022, with 14 shows on the docket—eight of those are already sold-out.

Listen to the official version of “Bread Song” below and find Black Country, New Road’s tour dates further down.