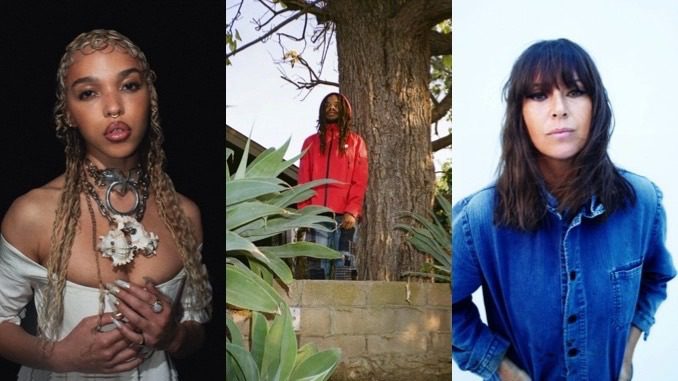 This week marks the return of Paste Music’s weekly roundups, meaning our Best New Songs and New Albums to Stream lists are back in business. Though January is typically a quiet month for new releases, this New Music Friday has plenty to offer nonetheless, including the fourth studio album from hip-hop outsider Earl Sweatshirt, the new mixtape from art-pop auteur FKA twigs, a covers album from Chan Marshall’s Cat Power and more. Start your long weekend off on the right notes below.

Never one to shy away from recording new interpretations of her favorite songs, Cat Power (aka singer/songwriter Chan Marshall) has continuously surprised and delighted not only with her wide-ranging covers selection, but also with the way she embodies each track as if it was her own. From oft-covered Jackson Browne standard “These Days,” to Billie Holiday classic “I’ll Be Seeing You,” to takes on Lana Del Rey’s “White Mustang” and Frank Ocean’s “Bad Religion,” Cat Power pulls off the difficult feat of taking wildly diverse source material and successfully filtering it through her own signature sound. The tracklist even includes a reworking of Marshall’s own song “Hate” from 2006’s The Greatest, now hopefully retitled “Unhate.” When you get a new Cat Power record of any kind, you know that there’s going to be magic stitched into each song, and even with the twists and turns of the songwriting credits, this record is no exception. —Elise Soutar

Cypress Hill’s DJ Muggs may be based in Los Angeles, producing for the iconic West Coast rap group, but his roots are still planted firmly in his hometown of Queens, New York. After producing for some of New York’s best over the years, he sets his sights on Rochester’s underground emcee Rigz. The result is a slick, glossy and luxurious New York standard affair, and Rigz raps like a snake in the grass awaiting his prey. Muggs sets a lush stage with twinkling pianos and hi-hats, ushering us closer to another golden age of East Coast rap spearheaded by Griselda, Rigz and many more. —Jade Gomez

Earl Sweatshirt, whether people recognize it or not, put the wheels in motion for this modern age of vulnerability in hip-hop. It has been almost a decade since his debut studio album Doris, and Earl has continued to refine and innovate his distinct, calculated delivery and lyricism. On SICK!, clever lines such as “”Can’t go outside no more ’cause n***as sick” on the album’s title track reflect the tumultuous and traumatic pandemic, as well as Earl’s more personal struggles with addiction. More than anything, Earl shows a tremendous amount of growth. SICK! is his final detox before he carries on into new endeavors. —Jade Gomez

Elvis Costello & The Imposters: The Boy Named If

Skilled with the pen, and with a breadth of musical knowledge that stretches outside of pub rock and power-pop compositions, Elvis Costello has made his fair share of brave choices that seem more puzzling now when you look at them in retrospect. Albums like the haunting baroque pop of Harle: Terror and Magnificence and the bluegrass of Secret, Profane and Sugarcane make all the sense in the world if you are a dedicated fan, but may seem curious if you are only familiar with the punchy hits that defined his Ray Ban-donned “New Wave” persona. But no one would be at fault to long for Costello and his long-running backing band The Imposters—who are the same Attractions lineup of Steve Nieve on keys and Pete Thomas on drums, with Davey Faragher filling in on bass for Bruce Thomas—to cut an album of nervy pop tunes in the mold of his classics like This Year’s Model and Armed Forces. Over the last few years, Costello has fed that hunger with a pair of fantastic return-to-form albums, 2018’s Look Now and 2020’s Hey Clockface. Now, with his brand new album The Boy Named If, he caps off this trio with a dense collection of both risks and hooks that doesn’t feel like a stamping of feet for attention or merely providing fan service. —Pat King

FKA twigs has returned, but not with the usual laser-focused artistic concept we’re used to getting from her. “It felt nice playing with the idea of not creating for the world,” she said in an Instagram statement accompanying CAPRISONGS’ release, claiming that isolation made her realize it was time to make something just for herself and her friends. It’s true that the mixtape seems less like a follow-up to her emotional tour-de-force MAGDALENE, and more like a spot for twigs to let loose at long last. Featuring an impressive list of production credits, with heavy hitters ranging from frequent collaborator Arca to Bad Seeds member Warren Ellis, this collection of songs plays like an expression of joy—a playful declaration of power and friendship in the face of uncertainty. While not as cohesive or bold as her other projects, CAPRISONGS works best when you let yourself get lost in the loose ends with her. Perhaps most importantly, it’s a reminder that even when twigs aims to just have fun, she’s still making some of the most compelling pop music out there right now. —Elise Soutar

There’s no new LP on today’s slate quite like foxtails’ fourth, their debut release on Skeletal Lightning (Harmony Woods, Maneka), and the follow-up to 2019’s Querida Hija. A self-described “bunch of fucked-up kids” from Connecticut, foxtails—that is, Megan Cadena-Fernandez (vocals, bass), Jon Benham (guitar), Jared Schmidt (violin) and Michael Larocca (percussion)—blend elements of post-rock, screamo, post-hardcore, math rock and jazz to devastating effect, exorcising trauma via their fearless songwriting and instrumentation. Cadena-Fernandez’s vocals are particularly impactful, as melodic at certain times as they are brutal at others, and their lyricism, despite dripping with darkness, is unerringly erudite and clever (“Momentarily alive / I wanted to apologize / For what I’ve done or what i haven’t / It’s hard to decide”), the silver lining around a new moon. foxtails, who are set to tour with Touché Amore, Vein and Dogleg this spring, have a way of translating suffocating emotion into music as invigorating as it is unique. —Scott Russell

Storm Queen, the second full-length release from Melbourne-based singer/songwriter and producer Grace Cummings, stays true to its title; the combination of Cummings’ arresting vocal presence and emotionally bare writing stands starkly against the sparse instrumentation, creating a sonic storm whose spell takes hold and sucks you into its orbit. With Cummings serving as the project’s producer and capturing almost every performance in only a few takes, each track sounds open and unrestrained while still putting forth a singular artistic vision that you couldn’t mistake for belonging to anyone else. “I am flying just like the eagle / Nothing can stop me now,” Cummings nearly growls on the closing track “Fly a Kite,” and with work as powerful as this, you have to believe her. —Elise Soutar