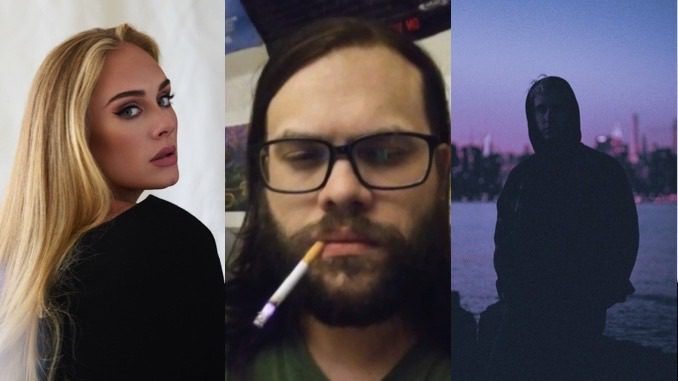 As 2021 draws to a close and the flow of new music slows to a trickle, it’s nearly time for Paste Music to shift focus from each week’s releases to those of the year as a whole, reflecting on our favorite sounds from this trip around the sun. This New Music Friday has some noise to make before that happens, though, with the loudest easily being an Adele record many are crowning her best yet. For the more indie-inclined (indie-clined? No, nevermind), there’s the reliably satisfying new Ovlov record, as well as a jazzy new rework album from Beach Fossils. And that’s not even mentioning the reunion of Robert Plant and Alison Krauss, the impressive debut of Mandy, Indiana and more. Listen up!

The early critical consensus around Adele’s much-anticipated first album since 2015 is that it’s the powerhouse vocalist’s finest outing yet, and our initial listening has done nothing to suggest otherwise. Rather than retreading the familiar ground of 25-era balladry, the pop superstar pushes herself in fresh directions on 30, her immaculate vocals flourishing more than ever amidst a diverse palette of sounds. All-star producers Greg Kurstin, Max Martin, Shellback, Tobias Jesso Jr, Inflo and Ludwig Göransson help Adele navigate lush neo-soul (“My Little Love”), thumping dance-pop (“Oh My God”), bubbly reggae (“Cry Your Heart Out”) and lavish R&B (“All Night Parking (with Errol Garner) Interlude”). Meanwhile, voice memos peppered throughout offer intimate glimpses into Adele’s thoughts and feelings. Listeners expecting emotional devastation will find what they’re looking for, particularly on “Woman Like Me” and “To Be Loved,” but 30 is far more than a divorce record. It’s Adele’s loosest, liveliest and wisest album yet (“Why am I obsessing about the things I can’t control? / Why am I seeking approval from people I don’t even know?” she sings on “I Drink Wine”), finally pairing her otherworldly vocal ability with instrumentation to match. —Scott Russell

Beach Fossils: The Other Side Of Life: Piano Ballads

Brooklyn institution Beach Fossils take another view of their output on The Other Side Of Life: Piano Ballads, reimagining some of their best-loved songs as jazz ballads. Beach Fossils founder Dustin Payseur cites jazz greats like Lester Young, Chet Baker, Bill Evans and Coleman Hawkins among the record’s inspirations, aiming for the same “blissful haze” their songs inspired. To do so, he reunited with former bandmate Tommy Gardner (Beach Fossils’ drummer from 2011-2016), who plays piano, sax and upright bass on the album, while Henry Kwapis handles percussion—together, they transform Beach Fossils standbys like “Sleep Apnea” (off 2013’s Clash the Truth) and “This Life” (off their last proper album, 2017’s Somersault) from dreamy guitar-pop into downright elegant jazz. Payseur’s breathy vocals, though, remain the same, the lifeline keeping these songs from falling overboard. The Other Side Of Life is a supremely soothing listen, casting the band’s indie-pop reveries in a stately new light. —Scott Russell

Twenty years on from Converge’s breakthrough Jane Doe, the band continue to push the limits on how heavy they can go. On Bloodmoon: I, their collaborative effort with Chelsea Wolfe, the dynamic shines. Wolfe’s haunting vocals float over the oozing guitar reverb, while Converge frontman Jacob Bannon’s grungy croon eases into his devastating screams. Bloodmoon: I finds both parties discovering new parts of themselves, resulting in an excellent mixture of sludge and doom metal with Wolfe’s gothic flair that shows how Converge’s stature is well-deserved. —Jade Gomez

Elbow delivered their heaviest album yet with 2019’s Giants of All Sizes, and now seem to have dialed things back for Flying Dream 1. On Flying Dream 1, each mellow track seems to diffuse into the next, and frontman Guy Garvey’s voice is a crooning comfort, as unhurried as the songs themselves. Even on their ninth studio album, Elbow’s lyrics are in tip-top shape, the more subdued sound allowing them the attention they deserve. —Ana Cubas

In the climactic moments of “Bottle Episode”—the opening track on Manchester, U.K. group Mandy, Indiana’s debut … EP—dancing and death collide. Over a deep house beat and industrial screech from producer/guitarist Scott Fair, and “Black Skinhead”-esque floor toms from touring percussionist Liam Stewart, vocalist/lyricist Valentine Caulfield sings in French about soldiers charging into battle: “And as the bullets hit them / The men dance almost / The men dance, the men dance, the men dance as they fall.” That image’s blend of beauty and horror, serenity and intensity, is key to the EP as a whole, which places “Bottle Episode,” the band’s newest track, alongside previous singles “Nike of Samothrace” and “Alien 3,” and remixes of those singles by Club Eat and Daniel Avery, respectively. Mandy, Indiana combine industrial dance and noise-rock elements to darkly compelling effect throughout, with a cinematic sense of narrative: On “Nike of Samothrace,” Caulfield sings as a woman walking home alone at night when she’s accosted by a man whose advances become threats; in “Alien 3,” she evokes an abusive relationship and references the titular film, singing, “I won’t live on my knees anymore.” It’s early days yet, but Mandy, Indiana are standing up tall. —Scott Russell

For those uninitiated, Max B is your favorite rapper’s favorite calling card. The incarcerated New York rapper, whose discography released while in jail never seems to end, is back once more with Negro Spirituals. Max B sounds reinvigorated, possibly due to his potential release by the end of the year. Aided by some well-placed features by Raheem DeVaughn, French Montana and Giggs, the veteran New Yorker delivers a throwback that has his city written all over it, with producer Paul Couture capturing sounds of city elegance to complement the legend’s scrappy edge. —Jade Gomez

Mr Twin Sister contain all the whimsy of an ’80s corporate training video, washed in the neon lights of a packed club. Al Mundo Azul is packed with the old and new, from psychedelic disco sounds to house influences, further refining the musical trends making a comeback into the mainstream. Andrea Estella is the true star of the show as she ponders life’s deepest questions with the bright disco lights shining on her. The group continue to reinvent and reimagine their sound and image, creating a cinematic universe in which all their facets can exist comfortably. —Jade Gomez

The electric guitar never sounds quite as warm and welcoming as it does when it’s run through a distortion pedal and comes out feelin’ real fuzzy. Ovlov know this. Listening to the Connecticut indie-rock band’s first two albums—2013’s Am and 2018’s Tru—is like drinking from the fuzz-guitar firehose; the swirl of distortion is so thick at times, it feels like you could drop into it and disappear. And yet the songs always feel bright and buoyant, a testament to main Ovlov-er Steve Hartlett’s skill as a composer. Like Built to Spill and/or Dinosaur Jr.’s, his tunes are never overwhelmed by the sound. On their third album Buds, Ovlov scale back the squall a bit and bring those tunes to the forefront. Don’t misunderstand: Hartlett and his crew still know how to dial up the fuzz, as they do with great gusto on the album’s punky, 98-second opening track, “Baby Shea.” But on Buds, they deploy it with more restraint, giving space to cleaner tones that jangle and chime, and to Hartlett’s charming melodies. —Ben Salmon

After their Grammy-winning 2007 effort Raising Sand, Robert Plant and Alison Krauss spent a fair amount of time swapping song suggestions while continuing their respective solo careers and waiting for their schedules to align for long enough to record some of them. As a result of their crate digging, Raise the Roof reflects a wide range of music as they corral American folk, country and R&B songs, along with a few British folk selections that Plant knew from way back. There’s even a burly original, “High and Lonesome,” that Plant wrote with T Bone Burnett, who produced the album. With a band anchored by drummer Jay Bellerose and guitarist Marc Ribot (with contributions from David Hidalgo, Bill Frisell and Buddy Miller, among others), Plant and Krauss cover a lot of ground. Raise the Roof would be eclectic, if it weren’t for the way Plant and Krauss (and the band) come together as if they’d been doing this non-stop for the past decade and a half. Perhaps the most appealing part of the album is that regardless of what sound, style or location these songs came from—British folk, New Orleans soul, Bakersfield country—they sound cohesive and of a piece in the hands of Plant and Krauss. In other words, the singers make these songs sound like their own. —Eric R. Danton

The second full-length from Portland, Maine rock trio Weakened Friends, out now on Big Scary Monsters and Don Giovanni Records, Quitter finds principal songwriter and vocalist/guitarist Sonia Sturino wondering what it would be like to walk away from music and get “a real job.” She sums up that core internal conflict on the title track’s huge hook, howling over enormous power chords, “I love it, but it never really feels okay.” Sturino, accompanied by Annie Hoffman (bass/vocals) and Adam Hand (drums), looks self-hate and regret in the eye on power-pop rockers like “Tunnels” and “25th,” mourning for the emotional doors her music career has slammed shut while simultaneously celebrating the way their artistry can serve as a vehicle for growth. Quitter has a winning combination of immediacy and depth, with the hooks to catch your ear and the songwriting to keep it. —Scott Russell