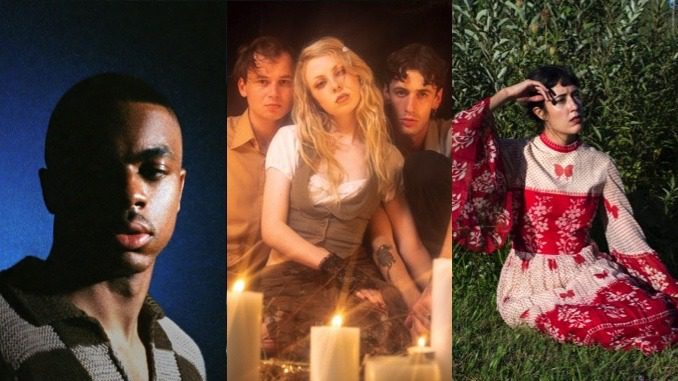 Life’s carousel has spun us back around to the weekend (cue Daniel Craig) once again, and launching us into 48 fleeting hours of leisure is another New Music Friday full of albums you need to know about. Heading up this week’s bill are the self-titled new effort from California rapper Vince Staples, the third album from Australian rockers The Goon Sax, and a career highlight from Nandi Rose’s Half Waif project, but there’s much more to explore elsewhere on this list. Ladies and gentlemen … the albums.

Arushi Jain: Under the Lilac Sky

Exploring the classical Indian form of raga through modular synthesis, composer and soundscape architect Arushi Jain’s music sounds both timely and ancient on her new album Under The Lilac Sky. Using her voice as a textural element alongside the massive drones and ambient chirps, the composer emphasizes the temporality of music and how it can affect us in different ways depending on when we listen to it. The result is a near-constant auditory delight of cinematic, purposeful and textural elements, with the artist explaining in a statement, “At any given point, there is at least one layer in the record that carries my voice. The human voice is powerful and unique to every individual. My voice is unique to me, so I decided it should be present at all times even if it’s unrecognizable.” —Jason Friedman

Toronto singer/songwriter/producer Charlotte Day Wilson doesn’t write songs when she’s happy. This is apparent in nearly every track on her debut album Alpha, with the undercurrent of powerful emotion pulsing through every lean groove, guitar strum and whirl of the singer’s robust voice. Wilson employs a unique sonic terrain through which she explores themes of queer identity, rapidly changing circumstances and insecurity, all with the help of several collaborators, including Babyface, Syd, badbadnotgood and Daniel Caesar. The production heightens every emotion Wilson breeches on Alpha, leaving its aura resonating even after the album. —Jason Friedman

The third album and Matador Records debut from Brisbane, Australia’s The Goon Sax, Mirror II is the boldest effort yet from Riley Jones, Louis Forster and James Harrison, close friends who formed their band in high school. The trio’s deep-seated connection keeps them on the rails as they push their sound’s limits, keeping intact the nuanced, slightly twee jangle-pop of 2018’s acclaimed We’re Not Talking and their 2016 debut Up to Anything while newly emphasizing dance and electronic elements. The unlikely blend clicks best on tracks like “Bathwater,” which begins as a mid-tempo strummer before upshifting into a dance-punk track a la Blondie, or slow-burn final single “Desire,” which sets droning guitars against a dying-battery drum machine, retro synth touches and Jones’ ethereal vocals. The trio’s vocal interplay, as reminiscent of Belle & Sebastian as ever, is the emotional core of all that instrumental juxtaposition, a real-time exchange of vulnerability and empathy. —Scott Russell

On her fifth record as Half Waif, Mythopoetics, Nandi Rose performs her artistic hat trick. Not that much time has passed since her 2018 breakthrough, Lavender, and much less time has elapsed since last year’s The Caretaker. Nevertheless, she has proven herself a formidable force. Rose is consistently productive, but the quality of her music has never wavered; it has only blossomed. It’s rare for an artist with this much creative output to be this consistently excellent, and the streaming industrial complex has only incentivized quantity over quality. Rose, however, is on a streak, and she continues that thread with Mythopoetics. She’s once again reunited with her frequent collaborator since Probable Depths, film score composer and producer Zubin Hensler. The duo worked together on Lavender, and the melancholia that permeated that record resurfaces on Mythopoetics, albeit in a different form. Where Lavender felt despondent, especially on tracks such as “Lavender Burning” and “Back in Brooklyn,” Mythopoetics imbues that loneliness with a sense of triumph. This album finds Rose at her most revelatory with swooning, resplendent compositions like “Midnight Asks” and the stunning closer, “Powder.” —Grant Sharples

Welsh producer Koreless, also known as Lewis Roberts, has spent the past decade refining a sound that reaches far outside the bounds of simple classification. Agor is a gorgeous collection of sensory comfort mixed with anxiety-inducing frequencies and patterns that tickle the innermost parts of our brains. The mystical quality of the album forms fuzzy, quaint pictures of sleepy seaside towns and distant memories fading into forgotten realms. Each song sounds like its been broken apart into never-ending shapes that cannot be properly replicated, creating an experience that is just as unpredictable as it is mathematic. The sonic textures on tracks like “Frozen” showcase Roberts’ expert manipulation of the human voice into instruments of their own, shimmering like a still pond. Agor never once feels intimidating, despite how it may sound. It sounds instinctual and reassuring, a rare feeling that Roberts captures on this labor of love. —Jade Gomez

Museum of Love: Life of Mammals

When it comes to Zimbabwe-born, Australia-bred rising star Tkay Maidza, talent is never the question; it’s where exactly that talent is going to take her. For her 2016 debut Tkay, it took her to a major label, but what should have been a coming-out party was actually a gut check: Would the big industry machine propel her to dizzying heights, or weigh her down to the point of paralysis? Rather than waiting around to find out, Maidza teamed with producer Dan Farber to make her next move her best move, opting not for a second album, but for an EP trilogy titled Last Year Was Weird in recognition of her star turn’s false start. Today’s third and final volume suggests Maidza has found peace in going her own way: “Money will come and will go / Too many queens on the throne,” she raps in sing-song on sweetly subdued opener “Eden,” like a stone in the river, allowing the industry to flow around her. The artist is equal parts vulnerable and versatile here: “So Cold” is a delicately floating funk tune about not falling in love, “Syrup” and “Kim” (feat. Yung Baby Tate) are braggadocious rap bangers, and the slinky, intimate “Cashmere” is a heartbreak jam in which she likens herself to that fine eponymous fabric. Maidza has better years ahead. —Scott Russell

Twin Shadow strips away the singer born George Lewis Jr.’s detached veneer and is a long-awaited breath of fresh air. The record’s first single, “Johnny & Jonnie,” is a warm, Caribbean-flavored romp that is pure light-hearted fun. This wistfulness extends to the acoustic guitar stylings of “Alemania”; echoey vocals give way to a simple and angelic chorus, and Lewis Jr. even tweeted about how its romanticism was “a toast to the good times in Germany and the Dominican Republic.” Lewis Jr. hails from the latter and parts of the album were recorded in the Dominican Republic at FAMA Studios. The soulful funk and bass of existentialist “Is There Any Love” could have been plucked straight from a fast-paced ‘70s Blaxploitation film—it boldly stands out on the project for all the right reasons. Lewis Jr. broaches a promising world of psychedelia with “Gated Windows” and its intergalactic sounds, though he unfortunately doesn’t take the full plunge. The bridge for “Brown Sugar” shows a wordy singer trying to cram as many syllables into his mouth as possible as some sort of spectacular buildup, but it (and the chorus that follows) fall flat. But that’s the best part about Twin Shadow; Lewis Jr. is dedicated to taking all of these stylistic swings, no matter how many times he misses. That kind of bravery shows how dedicated he is to the art of reinvention. —Candace McDuffie

In his nearly decade-long career, Long Beach rapper Vince Staples has never put out a bad album, a hot streak that continues on today’s self-titled effort. That said, listeners looking for the “FUN!” of his last album won’t find it on Vince Staples: The Kenny Beats-produced project is more like the breezy FM!’s suffocating counterpoint, with Staples stepping into the shadows to discuss the costs of living in a place where, inevitably, either “the sun or the guns come out.” The emcee has long made clear he can stand the heat, but spends Vince Staples showing us how much weight his psyche carries as a result: “When I see my fans / I’m too paranoid to shake they hands / Clutchin’ on the blam / Don’t know if you foe or if you fam,” he raps on “Sundown Town.” On the low-key psychedelic “Taking Trips,” he almost explicitly rejects FM!’s entire sensibility: “I hate July / Crime is high, the summer sucks / Can’t even hit the beach without the heaters in my trunk.” But a line on the R&B-infused “Take Me Home” puts it simplest: “You know these trips come with baggage.” Staples says he self-titled this album because it’s his most personal—if the rest of his discography is a shopping spree, then Vince Staples is the bill coming due. —Scott Russell

Detroit rapper ZelooperZ evades convention, instead reinventing his unique sound without end. On his surprise album Van Gogh’s Left Ear, the follow-up to 2020’s Valley of Life, ZelooperZ positions himself as akin to one of his favorite painters as he creates his own colorful, surreal world. As part of the Bruiser Brigade, one of the finest hip-hop collectives in recent memory, ZelooperZ serves as the group’s “secret sauce” with his distinct vocal delivery and witty punchlines similar to label head Danny Brown. Where ZelooperZ differs is in his production choices, embracing the whimsical, ridiculous and downright absurd on Van Gogh’s Left Ear. “Battery,” the album’s first single, is a cacophonous display of confidence, while the Crash Bandicoot sample on the Brown-featuring “Bash Bandicoon” is as hilarious as it is intriguing, with the two rappers nestling into different pockets of the Dilip-produced beat. The latter half of the album is ZelooperZ in a more accessible, relaxed state, with trap hi-hats and flutes soundtracking his introspective reflections on his momentous career. With the two sides of ZelooperZ coming together as a whole, Van Gogh’s Left Ear is a culmination of everything the rapper has built, while still leaving room to reinvent once again. —Jade Gomez