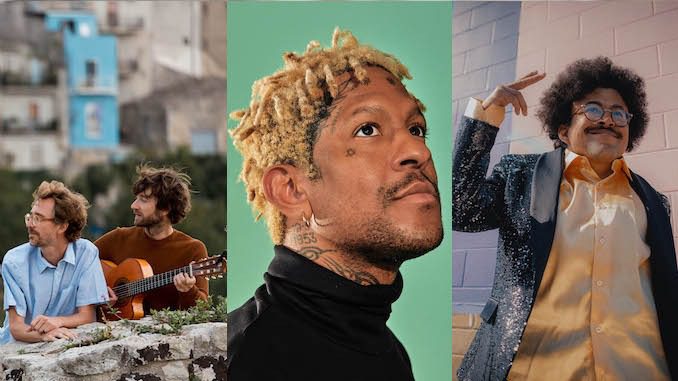 At this rate, it’s going to be Christmas. Full speed ahead as we reach the middle of the year—music won’t stop. Tour dates won’t, either. Cryptocurrency is struggling. Those cicadas are terrorizing the night. All that being said, we do have some fantastic new albums to cuddle up to as the cicadas scream into the abyss, like Kings of Convenience’s righteous comeback, and Shungudzo’s joyful songs of empowerment and protest. Maybe you just want to cry to some Covey (definitely not speaking from experience) or have a dance night to Mykki Blanco (something I do have experience with). Crank that air conditioner up and the speakers loud, and enjoy the sounds of our Paste staff picks.

All indications are that Tennessee singer/songwriter Amythyst Kiah’s second solo effort will be her breakout. Where her 2013 debut album Dig found Kiah operating in pure folk mode (with a “Fake Plastic Trees” cover hinting at her alt-rock ambitions), Wary Strange opens its arms to a wide spectrum of rock and roots sounds, with an assist from producer Tony Berg (Phoebe Bridgers, Molly Tuttle, Andrew Bird). The obvious standout here is “Black Myself,” a buzzing Americana rocker that centers on Kiah’s tribulations and pride alike as a Black woman (“I pick the banjo up and they sneer at me / ‘Cause I’m black myself”), which earned her a Grammy nomination for Best American Roots Song. But Wary Strange contains multitudes, from the Tracy Chapman-esque “Hangover Blues” and the classically country twang of “Ballad of Lost” to the sleek, shadowy R&B of “Sleeping Queen” and the lushly atmospheric blues-rock of “Tender Organs.” It’s thrilling to see Kiah (also known for her work with Our Native Daughters) putting it all together before our eyes, her rich sound blossoming around her fearlessly honest songwriting. —Scott Russell

On Remedy, Azure Ray’s full-length album in more than 10 years, the dream-pop duo of Orenda Fink and Maria Taylor create raw, emotionally vulnerable spaces for their voices to thrive in. Seeking to “explore new structural arrangements and sonic dynamics,” the band builds upon their traditionally spacious, ambient sound for some of their most direct and impactful music to date. Inspired by themes of trauma, anxiety and chaos, Azure Ray’s warm instrumentals and lush harmonies provide a sense of deep comfort, making Remedy one of the most stirring and fundamentally beautiful entries in the renowned band’s catalog. —Jason Friedman

Led by founding duo Amelia Fletcher and Rob Pursey (formerly of Talulah Gosh, Heavenly, Marine Research and Tender Trap), English quintet The Catenary Wires make indie-pop with a warming, rosy glow. On their third album Birling Gap, Fletcher and Pursey set their Belle & Sebastian-esque vocal harmonies to pounding keys (“Face on the Rail Line”), posh jangle-pop (“Always on My Mind”), twinkling synths (“Cinematic”), and even mandolin- and flute-accented throwback psych-rock (“Canterbury Lanes”), taking complete advantage of their full-band capabilities. They exhibit a deceptive degree of control in unifying all these elements, crafting a timeless pop melange with a restless, roving spirit—The Catenary Wires take their name from the cables that run above trains, and their new record is littered with references to the spaces (“Liminal” or otherwise) that make up their world, imbuing their music with a sense of giddy exploration, but also heartening belonging. —Scott Russell

Prosthetic Boombox, the debut album from songwriter/producer Matthew Urango (aka Cola Boyy), carries with it an undeniably gorgeous spirit of resilience and community. The artist, whose music is in part characterized by his experiences as a disabled person of color, paints a deeply personal portrait with the backdrop of often campy ‘70s funk and bright, optimistic pop. Seamless production from a number of high-profile collaborators—including The Avalanches, Myd, and MGMT’s Andrew Vanwyngarden—invite layers of imaginative songwriting that lends the album enough heart to be a standout. —Jason Friedman

“I’d love to spill my guts / That’s called oversharing, and it’s something we don’t do,” sings Tom Freeman on his latest album as Covey, before immediately proceeding to spill his guts. The British-born, Brooklyn-based songwriter makes explosive, confessional folk-emo, filtering his bleeding-hearted ruminations (“A ventricular system of personal complexities / Without fail will hemorrhage once a day,” he swears on “Point Mutation”) through a cavalcade of fictional characters who appear, class photo-style, on the album cover. Freeman’s nasal, painfully earnest vocals make his songs about hate, divorce, memory, and suffering both physical and mental (“Depression is such a fucked up thing / Don’t you think? / Those days you’re feeling half alright is comparatively ecstasy,” he croons on acoustic standout “Local Anesthesia”) all the more affecting. Class of Cardinal Sin honors these outpourings of emotion by matching them with upbeat rock eruptions, paying forward the sense of catharsis and clarity that Freeman yearns for with such candor and vulnerability. If wearing your heart on your sleeve is a cardinal sin, then that’s a price Covey is willing to pay. —Scott Russell

French indie-pop band Good Morning TV sound indulgent on their debut Small Talk, oozing that magnetic charm and effortless cool-factor. Taking upon heavy dream-pop influences, the haze over their lullaby-like guitar melodies and fragile vocals lingers slightly, but never feels like a snooze-fest. The build-ups into chirpy guitar reverb and other pockets of noise and distortion are satisfying, giving a well-rounded snapshot of a young band with plenty of potential. —Jade Gomez

Kings of Convenience: Peace or Love

With 11 tracks passing by in a breezy 38 minutes, Peace or Love ably picks up where Kings of Convenience left off on 2009’s Declaration of Dependence, as if taking 12 years and several tries to finish a follow-up is totally normal. (“We recorded the album about five times,” says Eirik Glambek Bøe.) As always, the focal point of Kings of Convenience’s work is the interplay between two gently plucked acoustic guitars and two tender, harmonizing voices, as heard to great effect in “Comb My Hair,” a simple and gorgeous song that plainly and effectively traces a post-breakup spiral. According to the band, both of Erlend Øye’s parents passed away since we last heard from Kings of Convenience, and Bøe’s 21-year marriage ended, too. So it’s no surprise that love and loss are recurring themes here. The lite-funk groove of “Fever” neatly approximates the dizzying feeling of infatuation with someone who may or may not share those feelings, and one track later, “Killers” juxtaposes what might be the album’s most graceful guitar work with bleak lyrical images: lies to cover up a crime, hearts of darkness, an interminable wait, an empty bed. And while “Love is a Lonely Thing” is an ominous title, a hopeful middle verse (sung by Leslie Feist) that likens love to gardening lets a little light in before finally giving way to the song’s presumed fate: “Love is pain and suffering /Love can be a lonely thing,” Bøe sings, sounding like a man who knows from experience. “Once you’ve known that magic, who can live without it?” —Ben Salmon

London indie rockers Yuck announced their break-up back in February, on the 10th anniversary of their self-titled debut album, but by then, their former vocalist and guitarist Max Bloom had already begun his next chapter. The follow-up to his 2020 solo debut Perfume, Pedestrian is another step further from Yuck’s blown-out fuzz-rock sound: Self-described “dadgaze” artist and producer Bloom favors stately piano and gauzy synth on the title track, accentuating his Ben Folds-esque vocal tone, and on the likes of “America” and “How Can I Love You,” he blends acoustic jangle with warm psych-rock riffs, lending a cosmic tint to his meditations on togetherness. B-side highlight “Twenty-two” is Bloom at his dreamiest, and contented closer “Cat on Your Lap” sounds like dusk on the front porch with its gentle lap steel and piano, as Bloom sings with contagious optimism, “The future looks so golden from what I can see.” To some, “pedestrian” is a pejorative, but Bloom’s new record is evidence of how the right perspective can turn the everyday into something special. —Scott Russell

California-born Mykki Blanco has been an unstoppable force since their debut EP nearly a decade ago. Since then, their artistry has evolved from house-influenced experimental rap into a striking mix of delicacy and abrasion. Their latest offering, Broken Hearts & Beauty Sleep, is a tale of evolution that blends soul, dance and indie influences while paying homage to the spunky, poignant bars that made Blanco one of the most revered experimental hip-hop musicians. The album’s collaborations, ranging from the angelic vocals from Jamila Woods to the slick raps of Kari Faux, fit together in the brilliant funhouse of Blanco’s mind as they untangle messages of vulnerability, pride, love and joy. In many ways, it feels like a proper reintroduction to Blanco’s artistry with an even brighter palette. —Jade Gomez

Shungudzo: I’m not a mother, but I have children

Zimbabwean-American artist and activist Shungudzo’s latest album I’m not a mother, but I have children is a protest album for the modern age. Each track’s distinct influences shine through her lyrics of empowerment delivered with a silky, chilling ease. Even when calling upon her dance, funk or folk influences, Shungudzo never forgets her beloved home of Zimbabwe. Each track, which was written in the wake of the George Floyd protests in 2020, creates a larger story of frustration that fuels change while daring to present the questions people are too afraid to answer. Each song is a war cry that can live in a playlist in your pocket, speaking to a new age of activism and accessibility for a brighter world that Shungudzo believes in. —Jade Gomez