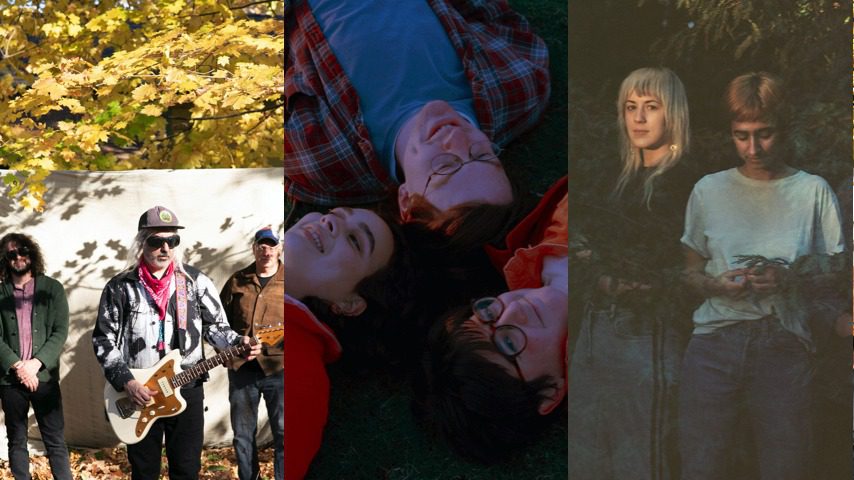 April’s penultimate release week has a lot to offer, with the latest effort from timeless rock institution Dinosaur Jr. leading the way. Dig deeper and you’ll find acts like Remember Sports, Porter Robinson and Sour Widows reintroducing themselves with statement-making new releases. That’s just the beginning of this New Music Friday slate’s standouts—dive into them all below.

Ade’s ridiculously ambitious debut Midnight Pizza is a kaleidoscopic collage of emotions. The songwriter harnesses a wealth of inspiration, ranging from trip-hop to hip-hop and indie rock to dance music, creating a grab bag of sounds that come together in his own version of harmony. The underlying humor to songs like “Another Weekend” and “Die” make for an album that can be approached from a myriad of ways, as the intricacies in each drum beat and horn slowly come apart from their knots and expand into snapshots of depression, fame and holding onto bad habits. It’s an indulgent record that is as fun as it is poignant—maybe a lot like pizza? —Jade Gomez

A Lahore, Pakistan-born graduate of Boston’s Berklee College of Music now based in Brooklyn, composer and singer/songwriter Arooj Aftab’s new album Vulture Prince follows her 2018 collection Siren Islands, but is in direct conversation with her 2015 debut, Bird Under Water. Vulture Prince opens with “Baghon Main,” a new reimagining of her debut’s fourth track that replaces the original’s subdued harmonium with bright, beautiful strings, as if assuming a newly accepting outlook on a painful past. This act of looking back on days gone by is central to Vulture Prince, which is dedicated to the memory of Aftab’s younger brother Maher, whom she lost while writing it—she explains that the album “is about revisiting places I’ve called mine, places that don’t necessarily exist anymore. It’s about people, friendships, relationships—some relationships that were unexpectedly short term, and how to deal with that.” Among Aftab’s most compelling explorations of the liminal space between love and loss is “Mohabbat,” which finds her breathing new life into a decades-old example of an ancient poetic form, the ghazal. With Vulture Prince, Aftab not only connects her songwriting to time-honored artistic traditions, but also makes music with the beauty to echo through the years in and of itself. —Scott Russell

Dinosaur Jr.: Sweep It Into Space

It seems reasonable to assume that Dinosaur Jr. isn’t where most people turn for yearning love songs, but a wistful streak lurks beneath the guitar onslaught and pulverizing volume that have come to define the group since, well, about 30 seconds into the first song on their first album, all the way back in 1985. Nobody is saying the trio is prom-theme material, but Dinosaur Jr.’s lovelorn sensibility has figured to some degree in each of the group’s five albums since guitarist J Mascis reunited with original bassist Lou Barlow and drummer Murph in 2005. Their latest, Sweep It Into Space, ranks among Dinosaur Jr.’s more vulnerable efforts, if such a description can apply to a band that has retained a remarkably consistent sludge-rock aesthetic over the past 35 years. In fact, Dinosaur Jr. build songs now much the way they always have, with blunt-force drums, thrumming, muscular basslines and superheated guitars turned up to the very edge of human endurance. What’s gotten sharper over the years are the melodies: Mascis has become a more tuneful songwriter, balancing noise with more nuance than he showed in the band’s early days. That combination pays dividends for the band right from the start of Sweep It Into Space, another rugged outing with subtle variations on the usual musical themes. Dinosaur Jr. tend to get by on a fairly limited sonic palette, yet the trio continues to find compelling ways to fuse their core musical elements into songs that resonate, on albums that almost never misfire. Sweep It Into Space is merely the latest example. —Eric R. Danton

Few things bring me as much joy as seeing Kero Kero Bonito slowly evolve from a happy-go-lucky electro-pop band to a slightly scarier, still happy-go-lucky electro-pop band that sings about impending doom and environmental degradation at the hands of human greed. Pieced together with vintage equipment, their new EP Civilisation II feels like a comforting experiment in the wake of an apocalypse, scavenging through the junk for something to create with as a means of communication. The three tracks encompass art-pop at its finest, traversing deeper philosophies and myths without sounding forced. —Jade Gomez

The second album from Philadelphia punk duo King Azaz (who share their moniker with a word-worshipping monarch from The Phantom Tollbooth) is a raw and explosive half-hour of rock, with tracks dating as far back as 2015, when their Tunnels EP was released (their full-length debut Spiritus Mundi followed a year later). Multi-instrumentalist and vocalist Christo Johnson and drummer Sarah Schardt describe themselves as “anti-capitalist, anti-racist, anti-fascist queer people making music to fuel and feed themselves,” but they also make it as an outlet for the emotions they tend to keep close, as introverts and close friends who lean on each other to fight through depression and oppression alike. King Azaz’s small headcount belies their big, jaw-busting sound, but there’s a tender, tuneful depth to their corrosive punk thrash, like on “Paulie,” where Johnson muses, “This world can be so cheap sometime / if you’ve got the cash.” This is a record for anyone who wants to feel better about feeling bad. —Scott Russell

North Carolina-based producer and songwriter Porter Robinson exploded onto the EDM scene in 2010, headlining festivals worldwide at just 18, years before releasing his first proper album, 2014’s Worlds. Even in those days of dubstep and drop worshipping, Robinson’s music had an uncanny sensitivity, with a fragile beauty present even in his bangers. But his meteoric rise threatened to suffocate his creativity, placing an immense amount of pressure on his songwriting—in many ways, Robinson’s journey back to a place of creative fulfillment is what his first new album in seven years is all about. Nurture draws its power from “hope, overcoming despair, faithfully pursuing a sense of purpose, and trying to prove that it’s worthwhile to try,” as Robinson puts it, frequently stripping away everything but his vocals and piano, as if to bare its soul for the listener. Bright, unerringly melodic and upbeat textures abound, yet a song like “Dullscythe” feels as if it’s coming together in real time, beginning as a collection of synth stutters before coalescing into a gorgeous, sweeping piece of electronic pop. Nurture is welcoming and vulnerable from beginning to end, radiating gratitude for all who take the time to find refuge in it. —Scott Russell

Despite their youthful sound, Philadelphia rockers Remember Sports have already lived a musical life or two. Forming as simply Sports in 2012 while their members were attending Ohio’s Kenyon College, the self-described “basement rock band” caught the attention of Father/Daughter with their 2014 self-released debut Sunchokes, going on to put out their 2015 album All Of Something; break up; reform with a new lineup, home base and name (adding “Remember” to avoid being mistaken for Tulsa, Oklahoma’s Sports, among other acts); release 2018’s Slow Buzz; and reissue Sunchokes. The road to their fourth album Like a Stone found Remember Sports as we now know them—vocalist Carmen Perry, bassist Catherine Dwyer, guitarist Jack Washburn and drummer Connor Perry—calling on their hard-fought continuity and cohesion, swapping instruments with a sure-handed skill fit to break them out of the basement. Frequently characterized as indie-punk, Remember Sports’ sound has more than a little of Philly’s own Hop Along in it (Carmen’s spirited vocals are similarly striking), but their nuanced indie rock folds in everything from explosive emo to warm Americana, containing the multitudes of a band who’ve grown to know exactly who they are. —Scott Russell

Tokyo singer/songwriter and multi-instrumentalist Satomimagae, who performs and records under a blend of her first and last names, has shared her first new album in four years, the hushed and rich Hanazono (or “Flower Garden”). Her debut release on RVNG Intl., the record suffuses gentle bedroom pop with a swirling psych-folk mystique—on “Tsuchi,” descending hisses evoke car tires on rainy streets, while “Kaze” finds Satomimagae’s fingerpicked guitar at the center of a quiet storm of synth and vocal swaths. Though the delicate dynamism of her instrumentation is consistently arresting in and of itself, Satomimagae also sings in both English and Japanese, her lyrics like half-remembered dreams of ancient fables. Hanazono would be haunting if it wasn’t so at peace, lingering in the corners of your mind like a benevolent spirit still echoing in this world so it can show you the ineffable beauty in the everyday. —Scott Russell

Bay Area bedroom-rock trio Sour Widows (Maia Sinaiko, Susanna Thomson and Max Edelman) released their debut self-titled EP in 2020, earning acclaim for their dynamic blend of sharp rock riffs and hushed vocal melodies (think Adrianne Lenker fronting Duster), which they control with the ease and ambition of a much more established band. They planned to keep touring, then start work on recording their first full-length album live in a studio … until COVID rendered all of that impossible. “2020 was going to be a big year for us and we had a lot of new material we were lining up to record in the studio,” Sinaiko told Paste in March. “There was a period of devastation we went through that a lot of bands have felt and continue to feel. But we decided to pare down our initial vision and focus on material we felt we could confidently record ourselves from our various homes, which was exactly the right choice.” The result was the band’s second EP, Crossing Over, out now on Exploding in Sound Records. Sour Widows rose to the occasion and then some—each of the EP’s four tracks is an emotional and instrumental journey, sweeping, yet carefully crafted for maximum resonance. It might as well be called Arriving. —Scott Russell

On their new record Nobody Likes Me, queer-pop duo TWINKIDS embed their devastating lyrics about failed relationships and self-loathing in glittery ‘80s synth pop. Singer-songwriter Jin Fukui pleads, “911, I’m sad / I’ve got that pain in my stomach / Trying to be the man that you’ve always wanted,” echoing back to the early days of social media blog posts and statuses, and ushering in a new generation of self-deprecating millennial humor as a means to cope. —Jade Gomez