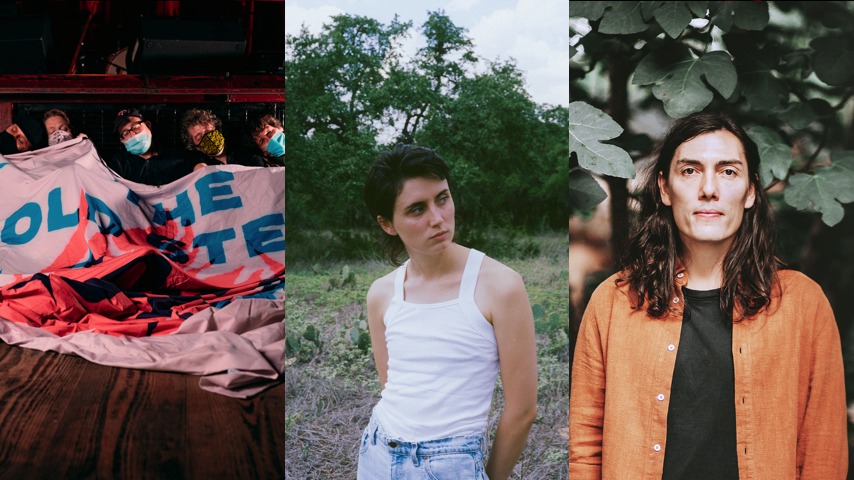 If there’s a better day of the week than New Music Friday, we have yet to hear about it. Not only does today herald the onset of the weekend, but it also brings us a pair of our most-anticipated albums of 2021 (courtesy of Katy Kirby and Valley Maker), as well as worthwhile new material from veteran (The Hold Steady) and rising (Another Michael) acts alike. Here are 10 albums we recommend kicking off your weekend with.

The fifth album from Dan Knishkowy’s psych-folk project Adeline Hotel is aptly named: Arriving at the end of an rougher-than-average week for our collective psyche, Good Timing feels designed to envelop and ease any troubled mind. Knishkowy interweaves crystalline acoustic guitar improvisations, creating a kaleidoscope of bright, glassy finger-picking that expands and recedes unceasingly, as if shaping itself of its own volition. Reverb functions like a distinct instrument on the album, elongating Knishkowy’s guitar work and complicating the interplay between its layers. At just 23 minutes, Good Timing’s glow is fleeting, but when it passes, it will take your troubles—or at least their sharp edges—with it. —Scott Russell

Describing Philadelphia trio Another Michael as an indie-pop act is accurate, but it’s also a serious oversimplification. Vocalist/guitarist Michael Doherty, bassist Nick Sebastiano and guitarist/keyboardist Alenni Davis combine a disparate set of influences—including everything from Damien Rice, Bright Eyes, Kanye West and Radiohead to R&B, dance, videogame and classical music—into a compelling debut album. The full-length follow-up to a pair of EPs, 2016’s Sans and 2018’s Land, New Music and Big Pop is the work of a hungry, young band still figuring out what exactly it is they want to say. But it’s also the sort of album to drop the rap airhorn into a somber, Fleet Foxes-esque acoustic number, or to take its title from two of its most dissimilar tracks, one a hushed slow-burn (“New Music”), the other a jangling, upbeat strummer (“Big Pop”). There’s something undeniable about music so clearly animated by both a spirit of exploration and pure passion for the art form. —Scott Russell

New York singer/songwriter Cassandra Jenkins has released her latest album, An Overview on Phenomenal Nature, out now via Ba Da Bing Records. Lead single “Hard Drive” highlights how meaningful unexpected, passing interactions can be, and as the pandemic has shown, memories of brushes with friends, acquaintances and strangers can often act as heartwarming fuel in moments of pain. Over minimal, jazzy instrumentals, Jenkins delivers stories via invigorating spoken-word, ones that examine the intersection of the material and immaterial worlds. Whether it’s a security guard lending wisdom on an art exhibition or a dear friend offering to mend a heart via mystical yet well-intentioned means, Jenkins mines profundity from the mundane. —Lizzie Manno

Craig Finn has said that the difference between his solo material and The Hold Steady’s songs is often one of scale. With The Hold Steady, Finn seeks big subjects to match the big riffs, while his quieter solo material can focus on smaller moments. If that distinction held true at first, the lines get pretty blurry on the band’s new album. There are still riffs aplenty, and big subjects, on Open Door Policy, but these 10 new songs mix them in among more textured arrangements and understated details reminiscent of Finn’s four solo albums. Maybe the most impressive thing about the band’s eighth album is how the group continues to push beyond its own boundaries. After a two-album stale patch a decade ago, The Hold Steady have rebounded to become more adventurous than they were before, and Finn’s storytelling has never been stronger. —Eric R. Danton

When Adrianne Lenker says an artist’s “writing and voice are ethereal and angelic and guide me through internal canyons and plains,” you stop and take notice. Lenker (alongside Big Thief producer Andrew Sarlo) co-produced the debut album from Sydney, Australia-born singer/songwriter Indigo Sparke, who lives up to her collaborator’s praise on echo. Songs like “Colourblind” and “Carnival” draw the bulk of their power from Sparke’s bewitching vocals, with only sparse instrumentation to pull focus from her mystic storytelling—a deliberate decision she and Lenker made. “This record is an ode to death and decay. And the restlessness I feel to belong to something greater,” Spark explains. “Adrianne and I talked so much about keeping the record stripped back and simple, that is, we are all just constantly getting stripped back and humbled by life.” Listening to echo feels like standing in the shadow of an entity so large, you can’t see its entire outline, flooding you with fear, but also an unknowable awe. —Scott Russell

The inevitable messiness of life is what makes it so painful, interesting and enjoyable, but learning to be okay with it all is much easier said than done. Nashville-via-Texas singer/songwriter Katy Kirby is well on her way in that journey. On her debut album Cool Dry Place, Kirby tries to decide what’s worth holding on to and what’s worth seeking, but also allows herself the freedom to pause and just revel in precious moments, like a drunken walk home (“Peppermint”) or the fantasy of protecting someone you love (“Eyelids”). Whether slipping into playful metaphors or arriving at an important realization, Kirby sounds, at once, comfortable and uncomfortable with the fluidity of interactions and situations, which is what makes this record more than just an incredibly pleasing collection of songs. Wants and needs are blurred, relationships shapeshift, but more than anything, a human desire for intimacy and understanding underpins it all. After dropping in and out of school, religion and recording music, Kirby is searching for a sustainable source of warmth—whether a person, a plant, Target lingerie or “a secret chord that David played.” —Lizzie Manno

With the gleaming, taffy-like synths that open Psymon Spine’s sophomore album Charismatic Megafauna, the Brooklyn-and-Berlin quartet flexes a muscle it previously showed only occasionally. Although the band’s 2017 debut LP You Are Coming to My Birthday often comprised muddy, thickly overdriven rock experiments, the edges of tracks such as “Transfiguration Church” and “Shocked” glowed with traces of sugary psychedelia. This melty, gooey sound comes into full view on Charismatic Megafauna lead-off “Confusion,” which springs vividly from the uniquely joyous soil where the roots of psychedelia and pop wrap around one another. It’s a fitting intro: Charismatic Megafauna is far more vibrant and colorful than its challenging, formidable predecessor. —Max Freedman

Valley Maker: When the Day Leaves

Columbia, South Carolina-based singer/songwriter Austin Crane has released his third album as Valley Maker via Frenchkiss Records. The follow-up to 2018’s Rhododendron, When the Day Leaves finds Crane melding folksy acoustic sounds with more entrancing electric textures, all of which evoke the unknowable natural forces that are the focus of much of his songwriting. Contemplative and serene, though never at the expense of their many tendrils of melody, Crane’s new songs are soothing in a way we all need nowadays. — Scott Russell

A Billion Little Lights is Wild Pink’s third album, their first since 2018’s acclaimed Yolk in the Fur, and their debut on Royal Mountain Records. It’s also the Brooklyn trio’s most nuanced and consistently satisfying release yet, a collection of anthemic, Americana-infused rock songs that, more than ever, justify the band’s comparisons to The River-era Springsteen torchbearers like The War on Drugs. Rather than recording all of the album’s instrumentation himself, as on past Wild Pink releases, principal songwriter John Ross recruited an array of collaborators, including producer David Greenbaum (Beck, Jenny Lewis), vocalist Julia Steiner of Ratboys and steel guitarist Mike “Slo Mo” Brenner of Songs: Ohia’s The Magnolia Electric Co. Sweeping and intimate in equal measure, A Billion Little Lights feels like taking to the open road with someone you love. — Scott Russell

The long-anticipated second effort from Tucson, Ariz., six-piece XIXA combines psychedelic desert rock with shifty Peruvian rhythms, resulting in an epic mystique that’s uniquely evocative of the place they call “The New Southwest.” Bandleaders Brian Lopez and Gabriel Sullivan oversee an outfit as adept at celestial rock opera (“Genesis of Gaea”) as they are at chicha- and cumbia-infused pop (“Eclipse”) and synth-driven psych sprawl (“Soma”), roving across a diverse stylistic landscape, but always with their eyes on the stars. XIXA’s new album is the kind that has a powerfully distinct tenor, yet leaves you wondering what this band can’t do. — Scott Russell