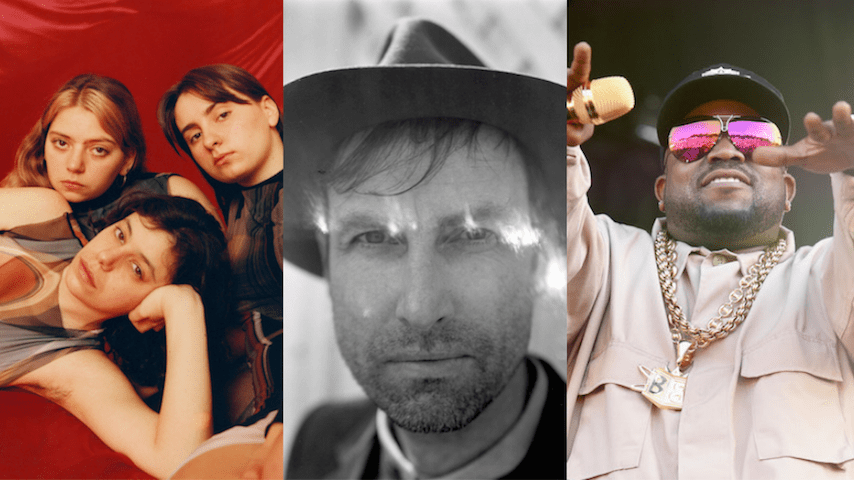 The year may be winding down, but today is an astoundingly great album release day. This New Music Friday brings a holiday album from Andrew Bird, a deluxe edition of Outkast’s Stankonia for its 20th anniversary, plus feisty records from Bike Thiefs, MOURN and more. Scroll down to dig into 10 essential albums out today.

Andrew Bird released a new holiday album titled Hark!, which arrives digitally today via Loma Vista Recordings and as a vinyl LP on Nov. 13. The 13-song record includes originals, holiday classics and covers of John Cale, John Prine and Handsome Family. “Let’s not talk about the dubious motives that might lead an artist to make a holiday record,” Bird says. “It’s a complicated relationship many of us have with the holidays and the requisite music we hear. So let’s admit that it’s a utilitarian thing. The music is just one contributing factor to our communal or solitary joy and melancholy. As a musician, it’s an excuse to take a break from writing the next record and indulge in an unapologetically nostalgic exercise.” —Paris Rosenthal

It’s been a while since we’ve heard a full release from country favorite Cam—four years, to be exact. That was when she treated us to her glimmering debut, Untamed, followed by her fiery, acclaimed single “Diane” in 2017. Now she’s finally back with her sophomore LP, The Otherside, which features the apocalyptic romance “Till There’s Nothing Left,” plus the recently released “Classic” and the sentimental “Redwood Tree.” Cam has a distinctly bright—but honest—outlook on life, and her enlivened brand of country music is a refreshing spot in the genre’s landscape today. The Otherside also features “Diane,” as well as songs co-written by Harry Styles and Sam Smith. —Ellen Johnson

Baltimore noise rockers Dope Body recently reunited for a home-recorded mixtape called Home Body, which Paste named one of the best punk albums of 2020 (so far). Now, they’re back with their first album since 2015, Crack A Light, out today via Drag City. One of its promo singles “Mutant Being” simmers with post-hardcore squalls and murky vocals that turn to howls, and its maniacal haze will be perfect for your (hopefully virtual) Halloween celebrations. —Lizzie Manno

Barcelona trio MOURN released their latest album Self Worth via Captured Tracks. It’s their fourth album, and it follows 2018’s Sopresa Familia, which was characterized by the seething anger they felt after being manipulated by their previous record label. Self Worth is imbued with a similarly intoxicating vigor and celebration of each other, but it also has a cool confidence and both melodic ease and intrigue. MOURN remain one of the most underrated rock bands going. —Lizzie Manno

7. Nothing: The Great Dismal

Nothing have released their fourth album The Great Dismal via Relapse Records, which was announced with the lead single “Say Less.” This spooky rock track contains Linkin Park-esque instrumentals and quiet-to-loud shifts. The Great Dismal was recorded during quarantine with producer Will Yip, and it features appearances from Alex G, Mary Lattimore and Shelley Weiss. “The Great Dismal refers to a swamp, a brilliant natural trap where survival is custom fit to its inhabitants,” frontman Domenic Palermo said. “The nature of its beautiful, but taxing environment and harsh conditions can’t ever really be shaken or forgotten too easily.” —Lexi Lane

OutKast are celebrating the 20th anniversary of Stankonia with a full reissue of the influential album. The reissue also includes previously unreleased versions of songs. Today, streaming platforms have been updated with digital bundles of newly certified singles, such as “B.O.B. (Bombs Over Baghdad),” “Ms. Jackson” (3x platinum) and “So Fresh, So Clean.” The “B.O.B. (Bombs Over Baghdad)” bundle features unreleased remixes from Cutmaster Swiff, Zack de la Rocha (Rage Against The Machine) and Beat Bullies. —Paris Rosenthal

Sinai Vessel, led by Nashville songwriter Caleb Cordes, self-released their latest album Ground Aswim, the follow-up to 2017’s Brokenlegged. It’s full of humble, soft-hearted indie rock songs—no bells and whistles, just guitars, vocals, drums and a big ol’ heart. These songs are charmingly intimate and sonically roomy, with Cordes’ vulnerable, melancholy tales as its guiding light. This is an album you give yourself to, and it gently rests an arm around your shoulder. —Lizzie Manno

L.A. trio Smokescreens released their latest album A Strange Dream via Slumberland Records. It was produced by David Kilgour of New Zealand band The Clean, and it features a distinctly sunny indie-pop perfectly in line with Kilgour’s beloved Flying Nun outfit. Who could say no to lighthearted jangle pop with feel-good melodies—especially when it’s executed with palpable warmth and memorable hooks? —Lizzie Manno