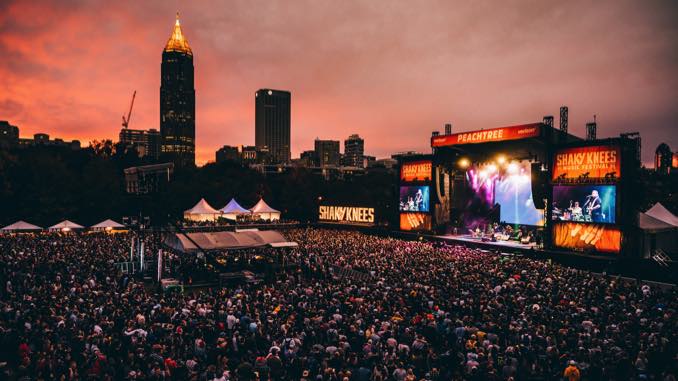 For the first time ever, Atlanta’s Shaky Knees music festival will happen twice within the same 12-month period. After the COVID-19 pandemic derailed both the 2020 festival and the planned 2021 dates, we finally made the pilgrimage back to Central Park (the one in Atlanta!) for a postponed reunion in October 2021. The festival, which usually takes place the first weekend of May, this year returns to its regularly scheduled time slot, which means it’s time to get groovy again just seven short months later. Following its typical formula of booking stellar legacy and alt-rock acts for headliners (this year it’s Green Day, Nine Inch Nails and My Morning Jacket) and filling out the rest of the poster with a mix of established bands and trendy indie acts, this year’s lineup provides the chance to see some old favorites and discover cutting-edge creators at the same time, all while enjoying (or, for the unlucky, sneezing through) Atlanta’s favorable spring weather. The lineup, combined with the good-natured attitudes of the organizers and festival-goers alike, make Shaky Knees an elite indie-rock festival year after year. And if you can’t make it out to the fest this year, that sure is a shame. But barring any additional global pandemics, there’s always next year. For now, the acts listed below are some of our must-see sets at the 2022 festival.

Amyl and The Sniffers

Melbourne-based punk band Amyl and The Sniffers recently made their American television debut on Late Night with Seth Meyers, and if you missed their sets at Coachella or haven’t already snagged tickets to any other shows on their mostly sold-out North American tour, Shaky Knees is your opportunity to catch the explosive group in the flesh. Their 2021 sophomore album Comfort to Me, which we named one of our favorite punk and rock albums of last year, marked an evolution in the Amy Taylor-led band’s artistry, marrying their fiery brand of garage rock to incisive, direct lyrics reflecting on sexism and broken societal structures. Known for their aggressive, high-energy performances, Amyl and The Sniffers are sure to bring their all to the Shaky Knees stage, converting any non-believers the second the barriers start shaking. —Elise Soutar

It’s been a while since Washington’s Chastity Belt played a show in Atlanta, so while they may be unfamiliar to some, I can think of no better setting for a crash course on all things Chastity Belt than Shaky Knees. Their cheeky brand of punk has outlasted numerous intimidators and inspired leagues more of talented feminist rockers. They don’t currently have any new projects on the docket, but they’re on tour with fellow Shaky 2022 artist Kurt Vile for most of May, what looks to be their first proper tour since pre-pandemic times. And they did put out a split single, “Fake / Fear,” last year. Their most recent album was a more muted self-titled project in 2019, but their outlandish first two records, No Regerts and Time to Go Home, remain the killer centerpieces of their discography. For now. —Ellen Johnson

Chicago band Dehd first caught our attention back in 2018, ahead of the release of their 2019 album Water. They followed shortly after with 2020’s Flower of Devotion, containing the earworm “Loner” and prompting Paste to name them The Best of What’s Next. They’re now gearing up to release their next LP, Blue Skies, next month, and it just so happens they’re kicking off their tour with a Shaky Knees set. This is actually quite fitting, as lead singer Emily Kempf was raised in Atlanta, so their Saturday set on the main Peachtree Stage should be the perfect place to show off their thoughtful indie-rock jams. —Ellen Johnson

Destroyer falls into the category of indie stalwarts playing Shaky Knees, but that doesn’t necessarily mean their set will be predictable. Canada’s Dan Bejar has around a dozen Destroyer albums under his belt, but none sound like the latest, last month’s LABYRINTHITIS, which was forged with longtime collaborator John Collins. LABYRINTHITIS takes to the dance floor, weaving art-rock, disco, punk and noise-pop into something entirely new for the band. It will be fascinating, and fun, to see and hear how this latest batch of songs translates in a live setting. —Ellen Johnson

Gang of Youths have won over a wider audience than ever on the strength of their early 2022 standout album angel in realtime., the band’s first new LP in five years. The Australian band, led by magnetic frontman David Le’aupepe, put on the kind of anthemic rock show you’re sure to get swept up in, whether you’re keyed into its emotional overtones or not. Gang of Youths make music as fit for the passionate fans jumping up and down in the pit as it is for the Shaky Knees-goers splayed out in the grass, letting their minds wander. We’re willing to bet everyone in the band’s Piedmont stage audience is going to spill out into Saturday night with smiles on their faces and stars in their eyes. —Scott Russell

Japanese Breakfast again falls into the indie mainstay column of Shaky Knees artists, but their live show following the release of 2021’s Jubilee has taken on a new meaning, as well as bringing in new instruments (including a gong) and textures. The album arrived after the release of frontperson Michelle Zauner’s best-selling memoir Crying in H Mart, and while the book and album are on totally different ends of the emotional spectrum, it feels fitting that Zauner’s rise to pop-culture notoriety should happen at the intersection of two such accomplishments. The live show feels like a total celebration of how far Zauner has come, and the Shaky Knees crowd is almost certainly ready to celebrate along with her. —Ellen Johnson

There were a lot of great songs released in 2019, but one quickly assumed its place among the greatest breakup songs of all time. That song is “Drunk II,” by Philly’s Mannequin Pussy. And it kicks as much ass live as it does on their 2019 album, Patience. Vocalist Marisa “Missy” Dabice commands the stage with so much ferocity, conveying both heartbreak and rage in equal measure. The band played Atlanta’s Masquerade last summer while on tour with another Shaky artist, Japanese Breakfast, but it’s time again for them to have a set to themselves. Check out their performance Friday on the Ponce De Leon stage, but only if you want to have a really great time. —Ellen Johnson

Just last month, London rock singer/songwriter Nilüfer Yanya took what we called “an exciting step forward” on her sophomore album PAINLESS, so don’t make the mistake of sleeping on her Friday afternoon set. The Criminal Records stage she’ll be taking is the perfect place to showcase her sound, which is made up of equal parts breathy vulnerability and propulsive power. Find a shady spot and let Yanya’s hypnotic rock songs wash over you. —Scott Russell

Nine Inch Nails, industrial rock pioneers, unexpectedly canceled their long-awaited tour in 2021 as COVID-19 concerns began to rise during the live music explosion. This came with the cancellation of several festival dates. Thankfully, Atlanta will be treated to their righteous return to the stage at Shaky Knees. The band’s festival performances are not to be missed, as Trent Reznor morphs into the transgressive rockstar who put his band on the map in the late ‘80s and ‘90s. Fans old and new will be delighted to be taken on a journey throughout the band’s expansive catalog that sees them tackle everything from metal to dance music. It’s a privilege to see a band stay in their prime as they enter their third decade, as Shaky Knees attendees will definitely appreciate. (Marietta native Robin Finck, the band’s long-time guitarist who has left and returned multiple times, will be playing with them, so in a sense it’s a homecoming show.)—Jade Gomez

Shannon and The Clams

Rockabilly/garage-punk band Shannon and The Clams have been making their way around the festival circuit over the last few months (with stops including Treefort Fest in Boise, where they recorded a session with Paste Studios) supporting their sixth studio album, 2021’s Year of the Spider. Though there’s a temptation to talk about the Oakland group like they’re just a throwback act, pointing to how they blend the weird kitsch of 50s and 60s pop with the back-to-basics alternative music that came out in the following decades, there’s unmistakable authenticity woven into the fabric of the delightfully off-kilter back catalog they’ve amassed so far. Their eclectic take on retro-pop, driven by the singular, smoky grit of front-woman Shannon Shaw’s voice, shines the brightest in a live context, allowing you to witness the band’s alchemy of old and new up close as they rip through one of most unique discographies in recent years each time they take the stage. —Elise Soutar