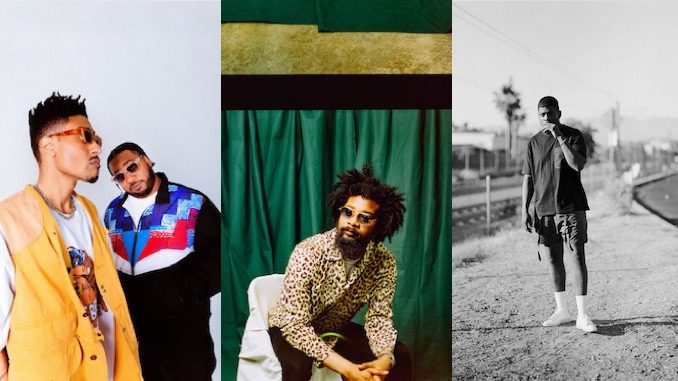 It might be good to dust off that old iPod and catch up on your favorite mixtapes ahead of this weekend’s Smokers Club Festival in San Bernardino, California. With an emphasis on weed and hip-hop, the festival focuses on the blissful nostalgia of 2010s rap featuring a stacked lineup that has to be seen to be believed. Paste is honored to cover such a historic festival, and it’s only right that we help you figure out what acts to carve out some time for. Here’s some of the acts we are most excited to see. Stay tuned for Paste’s full coverage as we head back into festival season.


Paste readers are no stranger to Danny Brown, the continuously evolving Detroit rapper known for his high-energy live performances that span his entire career. His highly anticipated sixth studio album Quaranta was initially expected to drop in 2021, but that seems to have been postponed to 2022. It’s his first performance of the year, hot off the trails of his monstrous year with the Bruiser Brigade. Whether we get some surprises or not, his performances are still worth a watch.


It may be too early to say that Earl Sweatshirt has one of the best albums of the year with the release of Sick!, but it most likely will end up being one of them. Sweatshirt has become synonymous with the blog era of rap that Smokers Club is celebrating, both as a solo artist and as member of Odd Future. His charm shines onstage, and his goofy jokes juxtaposed against his bleak, vivid portraits painted in his raps make for a truly exciting show.


Ferg is perhaps the most innovative member of the A$AP Mob, taking sonic risks at every twist and turn in his career. It’s been two years since Floor Seats II, and the rapper’s singles since then have covered a wide range of sounds such as the grimy Pharrell-produced “Green Juice,” which he premiered at Rolling Loud New York in 2021. Ferg still knows what the audience wants, and his thrilling live shows cover every inch of his career. With Trap Lord approaching its 10th birthday in 2023, Smokers Club may get an early treat to one of blog rap’s staples.


Flatbush Zombies emerged from the wonderfully weird New York rap scene of the 2010s as one of the city’s most intriguing acts. The trio, who are also part of hip hop supergroup Beast Coast with the Underachievers and Pro Era, are continuing to channel that New York grit with a modern twist. They can hold their own with East Coast legend RZA on their 2021 single “Quentin Tarantino” and dig into darker territories on their 2020 single “Afterlife.” Their onstage chemistry is a sight to behold, and they’re worth a watch this weekend.


Modern day Chicago legend Lupe Fiasco made his city proud in 2021 when he revisited Lupe Fiasco’s The Cool 14 years later at Riot Fest last year. Now, he’s tackling 2012’s Food & Liquor II: The Great American Rap Album Pt. 1 for its 10th anniversary. The landmark album is one of the most dense of the 2010s for its wide range of topics that make Fiasco one of the most revered storytellers in hip-hop. Smokers Club will get to witness the album in full, which may be a once in a lfietime opportunity.


From hidden gem to one of hip-hop’s most exciting figures in recent memory, Mick Jenkins has come a long way since his 2012 debut mixtape The Mickstape. 2021 saw the release of Elephant in the Room, which Paste named as one of the best hip-hop albums of the year. Jenkins’ ability to poetically unravel difficult questions and unspoken truths is made even clearer onstage.


Pac Div has been rapping longer than many of the people on the bill. Over 15 years since their debut and four since their latest album First Baptist, they are just as exciting as ever. Their ear for face-scrunching beats and clever wordplay feel like a nostalgic trip down memory lane, and it should be a pleasure to see underground rap veterans show why they’re still a sight to see.


While Habits & Contradictions and Blank Face LP get the love they deserve, there’s something to be said about Schoolboy Q’s Oxymoron, which thrust him into the mainstream. He’s the dark horse of Top Dawg Entertainment, and his gruff delivery that lays out sex references in the same breath as tales of gang life echoes back to the fascinating and tense landscape of West Coast gangster rap in the ‘90s. Eight years on from the album’s release, Q will be revisiting Oxymoron in full. It’s a deeply disturbing but triumphant album, covering overdoses, murder and his ultimate redemption. Let’s see how Q brings life to some of the album’s darker material.


The Cool Kids took a long break after their 2011 debut studio album When Fish Ride Bicycles, eventually returning in 2017 for Special Edition Grand Master Deluxe The duo, composed of Chuck Inglish and Sir Michael Rocks, have slowly gotten back into the groove of things. 2022’s aptly titled Before Shit Got Weird is one of the year’s most enjoyable hip-hop releases already. Dubbed as the first triple album in the genre, the duo has found their sweet spot. As one of the few acts to still channel the blog era charm that they became known for, it’s only right to make some time to see the legends at work.


Zelooperz is the prodigal son of Danny Brown’s Bruiser Brigade, and his rapid rise to one of rap’s most brilliant and innovative minds is difficult to ignore. The multi-hyphenate just finished wrapping up his first headlining tour and a co-headlining tour with comedian-turned-rapper Zack Fox. He’s also been featured on Injury Reserve’s excellent By The Time I Get to Phoenix and Earl Sweatshirt’s Sick!. If that’s not enough, he most recently dropped Get WeT.Radio, a loving tribute to his late father’s R&B playlist. Smokers Club will see Zelooperz’s first solo festival performance, and he will only bring out bangers. A quick note for festivalgoers: he may ask you to do a soul train, so brush up on your dance moves.