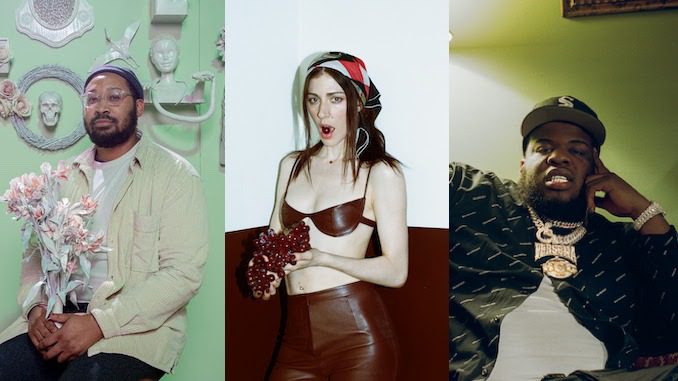 Chicago, known for its rich cultural history, is unsurprisingly home to some of the country’s best music festivals that never fail to deliver. In a rather busy month for music festivals as the world struggles to get back into the swing of live music, Pitchfork Music Festival is here to offer a wide array of acts across all genres. Boasting an impressive lineup that also features neo-soul legend Erykah Badu, guitar hero Phoebe Bridgers, rock abstractors black midi and more, here are 10 acts you’ll see the Paste staff in the pit for. You can catch all of our Pitchfork Fest excitement on Instagram this weekend.

The last time Animal Collective played Pitchfork Festival, the air was abuzz with anticipation regarding what the followup to their 2009 magnum opus Merriweather Post Pavilion would sound like, as the band is known for constantly reinventing their approach to writing music. When Animal Collective takes the stage this weekend, they do so capping off a decade of high-profile collaborations, multiple world tours, and even a few film soundtracks – but it’s been nearly 6 years since the release of their latest proper full-length album Painting With, with 2020’s quarantine-recorded EP Bridge To Quiet serving as the last bit of new music released by the group. Thus, the anticipation is alive once again, as Animal Collective’s viscerally engaging, energetic, and fan-delighting performances serve historically as previews of the band’s upcoming music. Viewers can expect an exclusive preview of the band’s new haunting, Grateful Dead-inspired sound alongside highlights and surprise cuts from deep in the band’s discography that we won’t spoil here. Though some time has passed since the release of Merriweather Post Pavilion, the indomitable creative force that has made Animal Collective one of the most consistently brilliant bands in indie music is alive and well. —Jason Friedman

New York hip-hop duo Armand Hammer, made up of Billy Woods and Elucid, released their fifth studio album Haram to acclaim. It does help that legendary producer The Alchemist had a hand in it. However, the two work exceptionally well over almost any production with their heavy lyricism laden with obscurities. The duo’s chemistry shines onstage when they get to put a face to what they do best: rap their asses off. —Jade Gomez

Bartees Cox Jr., better known by his stage name Bartees Strange, has become one of the many musicians who saw a surge in popularity during the pandemic. Despite the pandemic looming overhead, he went ahead and released his debut album Live Forever in October of 2020, eventually making the cut on our coveted Best Albums of 2020 list. Cox’s intoxicating blend of indie rock with bone-chilling soulful vocals and seething punk aggression tells the tale of isolation, anger and fear, and it’s exciting to finally witness these songs live. —Jade Gomez

Known for not holding back on theatrics, Caroline Polachek accompanied her acclaimed 2019 album Pang with a tour showcasing her effortless grace, and the vocals that have made her a treasured figure amongst those interested in the fringes of pop music and those involved in the mainstream. Fresh off her infectious single “Bunny Is a Rider,” Polachek is embarking on another tour to pick up where the pandemic left off as she revisits Pang, and maybe will surprise audiences with a peek of more new material. —Jade Gomez

Danny Brown has managed the pandemic better than most musicians. When he’s not streaming on Twitch, he can usually be found prowling the Austin, Texas, comedy scene or executive producing the many albums by his new label Bruiser Brigade Records. On top of this, he has also been hinting at finishing his anticipated new album XXXX (pronounced “quaranta”). Brown’s high-energy performances look back on some of his most captivating songs across his entire career, and fans old and new will not want to miss the surprises he may have up his sleeve with all the new songs and features he’s added to his tool belt. —Jade Gomez

In 2020, mere days before lockdowns began to take effect, Jay Electronica released his debut album A Written Testimony. It was an album thought to be a myth, as Electronica went years without much information on the long-awaited project. The hip-hop legend will finally be performing some of the songs off the acclaimed album alongside classics from his older mixtape Act I: Eternal Sunshine (The Pledge). It’s a chance to see rap history being made as Electronica finally presents his work that has been almost 15 years in the making. —Jade Gomez

Houston’s own Maxo Kream knew he had to bring out the big guns in prep for his forthcoming album Weight of the World, so why not release a song with Tyler, The Creator? The rapper has several mixtapes and the acclaimed debut Brandon Banks under his belt, combining his vivid storytelling and sharp sense of humor with an honest representation of his upbringing in Texas. His live presence is nothing short of magnetic, as Kream casts an imposing shadow that commands attention. —Jade Gomez

As the artist behind one of Paste’s top albums of 2021 so far, Toronto songwriter Tamara Lindeman’s folk-turned-art-pop project The Weather Station is a no-brainer highlight for us at this year’s Pitchfork Fest. Her transformative February album Ignorance is incredibly light on its feet given the weighty ideas—namely, the ongoing existential crisis of climate change—with which Lindeman is grappling, its jazzy, piano-driven pop songs unerringly contemplative, yet no less propulsive for it. Even the record’s slower, less festival-friendly tracks like “Trust” or “Subdivisions” have a way of drawing you in, almost imperceptibly closing their fists around your undivided attention. Come for The Weather Station’s danceable drums and sweeping melodies, but stay for Lindeman’s breathy vocals and fearless lyricism, which will linger in your mind long after the fest ends. —Scott Russell

It’s hard to imagine anything better post-pandemic than swerving with a festival crowd to the simultaneously gentle and powerful beats of producer/singer Yaeji. Following the release of last year’s WHAT WE DREW, the producer’s arsenal of tracks to pull from within her introspective style of DJing has grown immensely alongside her aesthetic sensibilities. Sing along to anthems like “Raingurl” or “Waking Up Down” as she takes the stage this Friday. —Jason Friedman

Yves Tumor’s live performances are a sight to behold, and the musician’s abstract, experimental vision takes on a new meaning in person. Their most recent The Asympototical World EP is nothing short of magical. Abrasive punk textures juxtapose against synths and orchestral elements to create Yves Tumor’s peculiar world that is a pleasure and a privilege to experience firsthand. —Jade Gomez