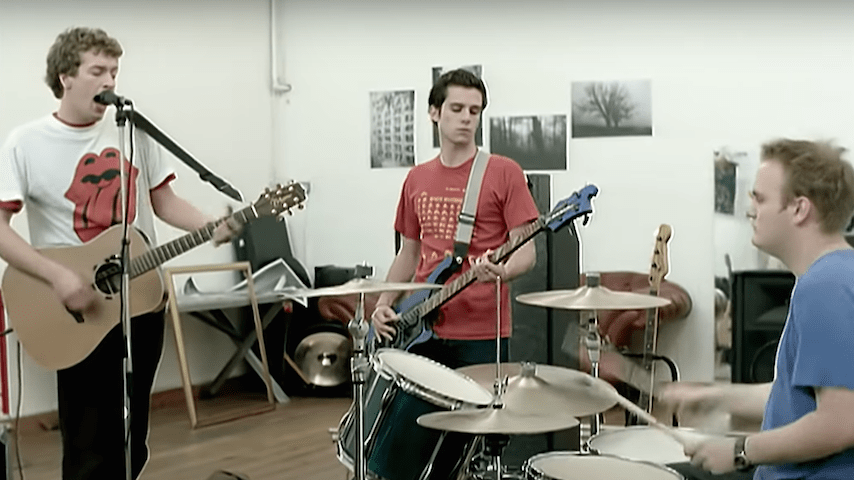 They’ve been called “bedwetters,” “the most insufferable band of the decade” and “a bunch of fuckin’ pansies.” They’ve been roasted in The 40-Year-Old Virgin (“You know how I know you’re gay? You like Coldplay.”) and Family Guy (“How ‘bout we do a song that’s not whiny bullcrap?”). They’ve joined the ranks of Nickelback and Creed as bands that even the average person knows they’re supposed to hate. But that reputation aside, Coldplay made some of the greatest albums of the 2000s, beginning with their softest, most melancholic record Parachutes, which turns 20 today.

The band, led by a then-curly-haired Chris Martin, formed at University College London in the late ’90s and originally went by the name Starfish. Martin was enthralled by alternative rock giants that could also pull off a touching ballad like U2, Radiohead, Jeff Buckley and R.E.M. When Coldplay burst onto the scene, British rock was beginning to shift after the Britpop boom. Oasis, Blur, Pulp and Elastica had already peaked or were nearing their peak. The Verve split up, and Richard Ashcroft went solo. Plus, garage rock revival bands like Bloc Party, The Libertines, Arctic Monkeys and Franz Ferdinand wouldn’t arrive until the mid 2000s. To fill that gap, a number of radio-friendly, adult contemporary rock bands like Travis, Stereophonics, Elbow and Embrace emerged.

It’s hard to make sense of Coldplay without Travis’ 1999 album The Man Who—a soft rock classic in its own right. The overly earnest acoustic favorite “Why Does It Always Rain on Me?” is practically the most Coldplay song that Martin and co. never wrote. But before Coldplay would join peers like Snow Patrol, Athlete and Starsailor in their mushy, good-natured pop/rock (and eventually best all these contemporaries), they sounded like Radiohead wannabes and could actually shred.

After they ditched the Starfish moniker, promo cassettes with the name “The Coldplay” began to circulate via their manager in 1998, beginning with a little-known track called “Ode To Deodorant.” Its noisy Radiohead-esque bluster was rambunctious, and it’s easily the closest they ever came to sounding like a punk band. Their first, more formal release was a demos EP called Safety. Much like “Ode To Deodorant,” its melodies and guitar dissonance recall a rougher version of The Bends, but it’s far mopier—almost morbid. The Radiohead comparisons don’t stop there either, thanks to Martin’s similar, but lower falsetto—and the EP even displays lead guitarist Jonny Buckland’s admiration for My Bloody Valentine, which surfaces in much less overt ways on later releases.

A year later, they dropped two more EPs, Brothers & Sisters and The Blue Room, largely in the same style, but with cleaner production and a few songs that appeared on their debut Parachutes. The three-track run of “Don’t Panic,” “See You Soon” and “High Speed” on The Blue Room was more indicative of where they were going—a hyper-melodic, gloomy sound with Martin’s tender vocals at the front of the mix.

2000 was a good year for hyper-melodic and gloomy. Badly Drawn Boy released his Mercury Prize-winning debut The Hour of Bewilderbeast, Doves shared their spacey first record Lost Souls, Grandaddy dropped their dejected concept album The Sophtware Slump and the king of those two aforementioned adjectives himself, Elliott Smith, released Figure 8. Coldplay would soon join these names with their own LP—though they went on to sell far more copies than any of those great albums.

Parachutes was released on July 10, 2000, and it was the first major stepping stone for the soon-to-be stadium rock band. Before Grammy awards or collaborations with Jay-Z, Coldplay were viewed as nerdy English saps who probably saw writing love songs as their best chance with the opposite sex. That reputation was in large part due to Parachutes—an album that boasted lyrics like “Look at the stars / Look how they shine for you / And everything you do / Yeah they were all yellow.” Some listeners couldn’t fathom these uncomfortably sentimental clichés, some embraced them and others excused them because the accompanying music was so overwhelmingly powerful.

“Yellow” was the song that broke Coldplay on a worldwide stage, which, given its universal romantic theme, makes a lot of sense. But it’s also more than meets the eye. Buckland’s aching, unhurried riff sounds like it’s tripping over the pace of the song, and it bleeds perfectly over Martin’s acoustic guitar. Packaged with Martin’s gorgeous vocal fluctuations and a slow-mo video of Martin walking along the beach at dawn, and they had a massive hit on their hands.

Despite the forlorn aura of “Yellow,” it’s actually one of the more uplifting tracks on the album. Before reassuring us that “we live in a beautiful world,” Martin mourns the fate of humanity on the opening tune “Don’t Panic”: “All of us are done for.” Later comes “Spies”—a paranoid track with sinister slide guitar about trying to evade one’s demons—followed by “Sparks” and “Trouble,” two love songs far too downcast to listen to in public due to the risk of tears. Additionally, the understated bass line and hushed melodies of “High Speed” evoke a different kind of sadness—a trippy kind that masks reality and makes one numb.

The exceptions to all this woe were “Shiver” and “Everything’s Not Lost,” two crucial tracks to understanding the evolution of Coldplay. Martin admitted to ripping off Jeff Buckley with the sparkling rock number “Shiver,” though Buckley’s influence—particularly his vocal vibrato—is all over Coldplay’s early work (you can practically hear Buckley’s “So Real” melodies on “Easy to Please”). It’s also one of their most indie rock-indebted songs, and it foreshadows the unique yet agreeable coffeehouse riffs that would show up later on songs like “In My Place” and “Strawberry Swing.” And “Everything’s Not Lost”—as opposed to the more desolate ballads “Trouble” or “Don’t Panic”—was a clear precursor to uplifting piano tracks like “The Scientist” and “Fix You” that made them an emotional powerhouse.

Whether it’s Jonny Greenwood’s influence on “High Speed,” Jeff Buckley’s on “Shiver” or The Verve and Travis’ on “Everything’s Not Lost,” Parachutes wasn’t the most groundbreaking debut of all time, but it was far more interesting, moving and delightfully miserable than most of the albums by their peers. Buckland’s tones and use of echo and slide guitar hold a majestic weight, but still make for calm, easy listening. It’s also Coldplay’s prettiest album by far. Its 2002 follow-up, A Rush of Blood to The Head, is similarly touching, but far less intimate and otherworldly than the universe Coldplay cultivated on Parachutes. Sophomore album tracks like “Politik” and “Clocks” were made for U2-sized transcendence, and it’s hard to imagine their arena shows sounding anywhere near as earth-shattering with selections solely from Parachutes. Parachutes had an eeriness to it that, apart from “God Put a Smile Upon Your Face” or “Daylight,” they didn’t revisit again until 2008’s Viva La Vida or Death And All His Friends—though Viva’s grand eeriness didn’t rival the more down-to-earth, spine tingling nature of Parachutes.

The floaty “Sparks” literally mimics what hovering in a parachute must feel like, “Spies” is deeply unsettling yet comforting and “High Speed” is a blurry anthem for washed-up stoners. Mystical undercurrents and marsh-like and woodsy landscapes arise from their swells of light percussion, guitar hums and Martin’s oscillating coos.

By album number two, they had already leveled-up from clubs and theaters to arenas and a coveted Glastonbury headline slot—a feat that’s virtually unheard of in 2020 or even throughout the 2010s. Without Parachutes, it’s impossible to imagine their scratchy Radiohead homages evolving into the distinctly Coldplay sound of “Clocks” or “The Scientist.” Coldplay would never have become piano rock giants without testing the waters with songs like “Trouble” or “Don’t Panic.” The groups that Coldplay helped spawn would leave a huge mark on radio rock for years to come—and unfortunately, many of them left much to be desired. If anyone was uncomfortable with the Hallmark love letter qualities of Coldplay, they probably wouldn’t have been able to stomach the piano-led tunes of Keane, The Script, Civil Twilight, Kodaline, The Fray and many others. Coldplay undoubtedly influenced the subsequent wave of pop/rock too, which they should probably be more apologetic about than the Keane wave—see anthemic, inoffensive outfits like Bastille, Hozier, etc. Though, much like Snow Patrol, Coldplay’s earlier material was much less tainted by the urge to outdo their tear-jerking radio smash hits that came afterwards.

Before Parachutes tracks brought them to Radio City Music Hall just a year later or turned up on soundtracks like Garden State, Boyhood and Crazy Rich Asians, it was simply an album of subtle beauty, made for bedroom contemplation and solitary cries in the mirror. In 2000, though they hadn’t reached the Pyramid Stage just yet, a raglan tee-donning Martin joked to the Glastonbury crowd, “It’s great that you’ve come to see us now, before we go like, Bon Jovi massive.” But 15 years later, Coldplay scored the third-highest grossing world tour of all time, and Jon Bon Jovi still hasn’t written a song as pretty as “Sparks” or “Yellow.”