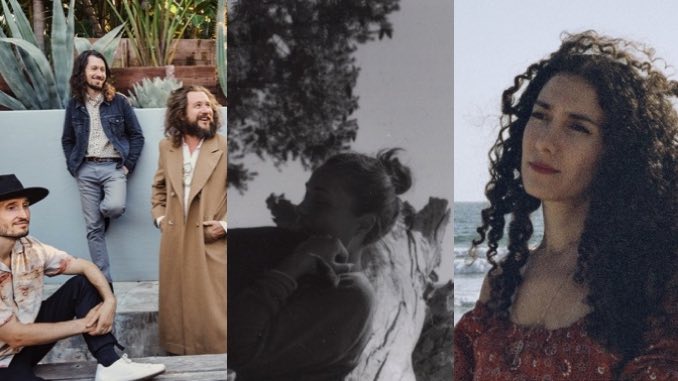 Today (Oct. 22) is the effective epicenter of a stacked month for new music, with an absolute smorgasbord of albums hitting streamers, shelves, etc. We’ve highlighted 10 excellent spots to start, including the self-titled return of My Morning Jacket, Liz Harris’ career-spanning new album as Grouper, and Bedouine’s third lovely folk LP. But as we said, there’s zero shortage of worthwhile music out this week, so once you’re done with the list below, be sure to dig into the honorable mentions at the end—these 10 are just the tip of the iceberg. Enjoy!

Waysides is not the typical album, but rather a hodgepodge of tracks cut from Bedouine’s previous records, threads of older material, scraps of the sounds and moments of her past. The album encapsulates the artist’s coming of age, grappling with emotions and experiences that come with gaining wisdom. Waysides is the kind of album that would back delicate daydreaming or frolicking through a field, as much as it would work for deep contemplation and nostalgia. Azniv Korkejian has a way of wrapping up rather heavy-hearted lyrics in a charming manner, so much so that the emotion at hand must often be extracted. Sometimes the emotional weight of the song is completely different from how the song sounds, as if one track can become two simultaneously. To use a phrase Korkejian herself sings in “You Never Leave Me,” her music is both “sweet and tough.” —Ana Cubas

For years, composer and songwriter Haley Fohr has been recording inventive, eccentric and often hypnotic avant-garde music as Circuit des Yeux. In August, she announced her signing to the famed Matador Records along with her new album -io, out now. Recorded with a 24-piece ensemble consisting of strings, brass and winds, the album was written while Fohr grappled with personal loss amidst the avalanche of grief that the pandemic brought, and represents “a place where everything is ending all the time.” —Jason Friedman

Deerhoof: Actually, You Can

When the work of the long-running experimental rock band Deerhoof finally clicks, it can feel like you are being punked by your own brain. Throughout their tenure as a group, they have remained focused on the musical margins they could overcome by constantly moving forward at a prolific, steady pace. The group can be avant-garde, full of melody, anthemic, joyous and frightening, sometimes all within the same song. On their self-produced 18th album Actually, You Can, they further justify their attempts to be all of those things at once. Deerhoof are a band who understand what they could have lost over the last two years. We can’t fool ourselves into thinking that we need to fill practice spaces in order to fill the world with music. But with Actually, You Can, these four individuals have created a celebration of human possibilities and one of their best records to date. Can we regain the magic? Actually, we can. —Pat King

Several of 2021’s most beloved and interesting albums feature a cerebral, textured chaos that sparks a wide range of emotions—including records by Spirit of the Beehive, The Armed and Turnstile—and Dummy’s Mandatory Enjoyment certainly accomplishes that same feat. Their blend of noise-pop and new age music works on multiple levels, especially because both subgenres thrive on the fascinating intermingling of electronic and organic components. But what’s arguably most satisfying about Dummy is that their thrumming instrumentals evoke crisp lines, while their free-flowing, tangential textures color outside those bounds—their songs always feel like the perfect painting. —Lizzie Manno

On Shade, her first album as Grouper since 2018’s Grid of Points, Liz Harris draws from recordings that span the 15-year breadth of her career. Where her previous records pulled you into their own individual universes, casting a spell over the senses until the final notes rang out, here Harris breaks the spell over and over, seemingly on purpose. Shade, for example, begins with a plume of digitized ocean spray that sets the stage for “Followed the ocean,” a track that would have slotted right in with the ambience on Dragging a Dead Deer. From there, though, Harris takes a sharp left turn with the crisp melodicism of “Unclean mind,” an acoustic guitar-and-vocal number that, in spite of its sparse, bone-dry arrangement, evokes commercial alt-rock, with double-tracked vocal harmonies that recall ‘90s acts like Lush and Smashing Pumpkins. In its own gentle way, Shade nudges the audience to view Harris as an all-around musician, rather than as the consummate mood-setter she’s long been hailed as. It’s as close to an attention-grabbing gesture as we’re probably ever going to get from Liz Harris—but if that’s what this album is, it’s an attention grab that’s well overdue. —Saby Reyes-Kulkarni

Fun House’s scope is unrelenting. From the muted electronica to the Neil Young-esque Americana, Meg Duffy uses the record to explore parts of songwriting they’d previously dismissed as impossible for them to achieve. The centerpieces of Hand Habits’ last record placeholder (“yr heart,” “jessica,” “pacify”) were all fortified in the same headspace of urgency and timeliness, whereas Fun House, in its entirety, organically sprawls into songs that touch almost every inch of Duffy’s emotional carbon footprint, releasing a battlecry of complexity, while remaining stoic in articulating the human existence without withholding responsibility or romanticizing fallibility. The final line on their debut as Hand Habits, Wildly Idle (Humble Before the Void), was, “When I get new bones / I’m gonna grow.” Now, four years later, Duffy has made good on their promise, reckoning with how society has compartmentalized their identity in a way that no longer feels authentic. Fun House is a record charmingly drunk on the flourishes of autonomy. It touches on grief, suicide and transness with the intent of not letting the listener attribute the entire thing to one of those boxes exclusively. —Matt Mitchell

Roberto Carlos Lange, aka songwriter/producer Helado Negro, has released his new album Far In via 4AD. His first release on the acclaimed label, Far In follows 2019’s deservingly acclaimed This Is How You Smile, a spellbinding and serene record that tracks Lange’s experiences as a Latinx individual reckoning with spiritual awakening. Far In embraces that mysticism, with Lange saying it ”’celebrates the ghosts,’ embracing pleasure and freedom to follow the metaphysical further.” Written in Marfa, Texas, during the brutal summer of 2020, it stands as a testament to resilience, as Lange says “escape is never out there, you have to go inward.” —Jason Friedman

It was at Red Rocks Amphitheatre, between those towering rust-colored silhouettes and underneath a Colorado sky dotted with stars, where My Morning Jacket’s members decided they could still be a band. Prior to taking the Red Rocks stage, and following the release of 2015’s The Waterfall and a deluxe reissue of their 2003 classic It Still Moves, the Louisville, Kentucky-bred rock band embarked on a massive tour that ended with a nearly two-year hiatus. Fast-forward to 2019, when the band (lead vocalist Jim James, bassist Tom Blankenship, drummer Patrick Hallahan, guitarist Carl Broemel, and Bo Koster on the keys) didn’t “know if we’d make another record again,” according to James. That two-night run at Red Rocks, however, jolted them awake and not only confirmed that they would make music together once more, but also reminded them that their bandhood “felt like coming home,” as Blankenship described it. Later that year, My Morning Jacket started work on what would become their self-titled ninth album, a low-stakes rock record that spends as much time pondering unanswerable questions as it does basking in the well-earned freedom to do whatever the hell they want. —Ellen Johnson

Despite their mainstream breakthrough three years ago, and the more widespread critical acclaim that came with it, Parquet Courts remain vocal critics of their industry. Their faces aren’t on Amazon Prime boxes and they aren’t in TikTok advertisements. They sell out tours, but they haven’t sold out, and while other acts have spent lockdown making more introspective records, Parquet Courts emerge from their quarantine with Sympathy for Life—still keen on unleashing their trademark woozy, brash and fearless desecrations of star quarterback legacies and capitalist moguls. Co-frontman Austin Brown describes it best: “Wide Awake! was a record you could put on at a party. Sympathy for Life is influenced by the party itself.” The latter’s jabs are unintentionally tailored to pandemic gripes and their residual effects—packaged as a record that’s the kind of groove you’ve got to sit down and appreciate. It’s the group’s Talking Heads fever dream: a mirage of thought-provoking, unforced, anti-fascist rock and roll written during acid trips and exercise routines, all slapped atop addictive instrumentals. —Matt Mitchell

In many ways, Wet’s Letter Blue is a reintroduction. The band first made waves with their self-titled debut EP in 2013, reaching new audiences in support of CHVRCHES on tour, and landing a deal with Columbia Records, who would release their 2016 full-length debut Don’t You and 2018 follow-up Still Run. But between the muted response to their records and the departure of original guitarist Marty Sulkow, it was fair to wonder whether the band would ever truly deliver on their promise. That’s exactly what Wet, a trio once more, are poised to do with Letter Blue, set for release via AWAL, and featuring collaborations with Toro y Moi’s Chaz Bear, Blood Orange (on “Bound”) and Frank Ocean keyboardist Buddy Ross. Four of the album’s 10 tracks have already been released as singles, revealing a band both recapturing the unrestrained verve of their nascent days, and reaching new heights of hard-won wisdom and maturity. —Scott Russell